On the day we meet for this interview, Will Forte is lamenting his performance from the night before on “Late Night with Jimmy Fallon.” He had sung a rendition of his suggestion for Fallon’s new “Tonight Show” theme song – a funny, yet slightly scatterbrained song that made references to North Korea and the fact Fallon’s “Tonight Show” would only air once a year; basically vintage Will Forte comedy – and he is worried that this was not the type of thing that would make people want to see his new movie, Alexander Payne's “Nebraska.” He just didn’t want to do anything that would harm the reputation of the film (a film that has just garnered Forte a National Board of Review award for Best Supporting Actor and a nomination for an Independent Spirit Award). Which is an interesting sentiment, considering (A) how relatively tame Forte’s song was and (B) that this was a man who once danced around naked in a movie with a piece of celery sticking out of his ass.

Forte would spend eight years on “Saturday Night Live,” specializing in oddball characters like politician Tim Calhoun or darker creations like Jeff Montgomery, a sex offender who tries to trick his neighbor into signing a sexual offender acknowledgement letter by dressing as a sex offender for Halloween.

For his SNL audition in 2001, Forte performed a character based on the street performers who dress in gold paint and perform for money around New York City. “And then the reveal at the end of the song,” Forte recalls, “is that he sucks cock for his face paint. And then the rest of the song is all about just cock and face paint. Basically the final two minutes of the song are just repeating the words ‘cock’ and ‘face paint’ in a melodious way.”

Forte remembers running into “SNL” executive producer Lorne Michaels shortly after his audition, “I hadn't seen him up on stage because it's kind of dark out there. I saw Lorne, he shook my hand and said, ‘Thank you for coming.’ I just said, ‘Sorry for all the cocks.’”

Two days later, Lorne Michaels called -- “I guess it was just the perfect amount of cocks, because I got the job."

Forte turned it down.

Four years earlier, in 1997, Forte had been working on Jenny McCarthy’s sketch show in Los Angeles when he got the opportunity to write for “The Late Show with David Letterman.” Writing for Letterman, a personal hero for Forte, was quite the coup for the then 27-year-old. “He’s one of the reasons I went into comedy in the first place.”

It’s obvious when Forte talks about his experience at Letterman that it’s not a pleasant memory. His face grimaces when he admits, “After about nine months they just said... I don't know, I got let go.”

Forte still has the utmost respect for Letterman and recently appeared on the show to promote “Nebraska” – which Forte describes as, "a really special experience. He was so good to me and he treated me like I was a member of the family” – but, as for his time there, “It's hard. I just didn't have enough experience at the time. It was very stressful.” Adding, “They made the right decision. I just wasn't as good at writing for that show as I wanted to be.”

Forte moved back to L.A., writing on a string of eventually canceled shows – remember “Action”? Remember “The Army Show”? You probably don’t– and joining the famed comedy troupe The Groundlings; he even dabbled in stand-up comedy. (Forte had a stand-up bit based on an Otis Day and The Knights concert that he attended in which Day bragged, “Ain’t no party like the Otis Day Party because the Otis Day party don't quit.” In Forte’s version, the party does finally end when Day loses his arms in a horrific accident.) Eventually, he landed staff writing jobs on two hit network sitcoms, “3rd Rock From The Sun” and later, “That ‘70s Show.”

By the time that Lorne Michaels call came around, Forte turned it down out of a combination of finally having some job security and, mostly, the fear of failing at yet another dream job, “I was just scared. I was terrified to fail at my dream … am I going to have that same experience of not being able to fit into this place that I loved all my life?”

So Forte did what very few people have ever done: Audition for “SNL,” get offered a job at “SNL,” then turn down “SNL.”

"I think Lorne probably sensed I was terrified of it,” Forte admits. A year later, Michaels once again called Forte to offer him a job. This time, he accepted.

"It was hard … it's hard not to let it affect you psychologically," Forte says in response to the box-office failure of his 2010 film, “MacGruber,” -- a film based on his recurring “MacGyver”-influenced “SNL” sketch that Forte both wrote (along with Jorma Taccone and John Solomon) and starred. Though it’s achieved so much of a cult favorite status now that during interviews he’s routinely asked about sequel possibilities, “MacGruber” performed so poorly that, by its third week of release, it was practically out of theaters.

Following the disappointment of its release, the easy choice – perhaps the sane choice – would be to return for another season of “SNL.” Instead, Forte decided to walk away. “Some people probably think that I decided to leave the show before ‘MacGruber’ came out,” Forte hypothesizes, “thinking ‘MacGruber’ would do really well and this would launch me into some kind of movie career. I made the decision after it had already bombed at the box office. It came out in May, it didn't do well, and I made the decision in July to not go back."

Back in April of 2013 –- a month before “Nebraska” debuted at Cannes -- I was at a party thrown to support the Tribeca Film Festival premiere of a small independent film titled “Run and Jump” in which Forte was co-starring, his first true dramatic role. I had met Forte a few times before and we had what could be considered, at the very least, a familiar relationship. By the end of the evening, I was sitting with Forte’s mother, Patricia, who asked me, “Is Will being in ‘Nebraska’ really going to be a big deal?” I answered, trying not to slur my words, “Yes. It is.”

It makes sense that Forte’s mom would ask such a question. After “MacGruber,” Forte took small roles in comedic films like “Rock of Ages,” Adam Sandler’s “That’s My Boy,” “The Watch,” and again with Sandler in “Grown Ups 2” (and only the last film could be considered a “hit”). Forte admits he felt a bit lost during this time period, “I'll go out, I'll see if there are any acting opportunities, and if nothing really happens, I can just go back to writing, which I loved very much.”

So, yes, compared to those movies, a starring role in an Alexander Payne film should raise some questions from close family members.

Forte had gained some positive attention for playing Jenna Maroney’s cross-dressing boyfriend on the critically acclaimed “30 Rock” --- a role that, strangely, was the only work of Forte’s that director Alexander Payne had been familiar with before Forte’s audition tape arrived (though, Payne did have to be told, “that’s Jenna’s boyfriend on ‘30 Rock’”).

“I feel exactly the same,” Alexander Payne told me during pre-interview chit-chat back in October when I mentioned, offhand, that Forte’s star turn seemed like a situation where something nice is happening to a nice guy. Of course, Forte had to wait a long time for that “something nice” to officially happen. Six months passed between the time Forte auditioned for the role and when he actually found out the role was his. The role is David Grant -- the erstwhile son who follows his father, Woody (a role that eventually went to Bruce Dern, who now lists Forte as his second-favorite on-screen partner, behind Jack Nicholson), on a harebrained journey From Montana to Nebraska to claim prize money from a Publisher’s Clearing House-type letter that everyone but Woody realizes is a scam.

When Forte did finally get offered the part -- and the giant leap that was ahead of him -- some of those same feelings he had after Lorne Michaels first called him came rushing back.

"I was terrified," Forte remembers. "It was similar. I just remember I had that period after I got the job, in both cases -- 'SNL' and 'Nebraska' -- the period between that and when I actually had to start working on them, I never wanted that period to end. I never wanted to have to actually go do them."

Will Forte’s been reading reviews of “Nebraska.” Which has to be a much more pleasant experience than reading the reviews of “MacGruber.” Though, even though the reviews have been overwhelmingly positive, there’s still a hint of sadness when he discusses the ones that weren’t so kind. “It definitely is the closest to who I am in real life … You feel very vulnerable in a way that you don't when you're doing a character. So even with the crazy scene where I run around naked with a piece of celery in my buns, people would probably think Oh, my God, that must be the hardest thing to do. But that kind of stuff is really easy compared to feeling like you're exposing your private self to people. That took a while to get used to.”

"I've read some really horrible things in the past and some really wonderful things in the past … It can really be a bummer at times." Forte equates reading the reviews with his fear of flying – a phobia that he no longer has after listening to hours of black box recordings on a website called Airdisaster.com. (For research purposes, I went to this website. I would not at all recommend it for any reason.)

Now, at 43, Forte says from the experience of “Nebraska,” he’s learned “to not be afraid to be vulnerable.” Perhaps that’s why he agreed to this interview in the first place. Perhaps, to him, this is the equivalent of listening to the recordings from doomed airliners.

This is the sixth time that I’ve interviewed Forte and he’s never been anything but the perfect gentleman, but this is the first time I have ever seen this side of him. It’s the first time that I have seen him, to use his word, vulnerable. I like this side of him. And, obviously, with the reception that “Nebraska” has been getting, others feel this way, too – you know, the vulnerable guy who doesn’t have a celery stick in his ass.

With 'Nebraska,' Will Forte Leaves MacGruber Behind
"Nebraska" Photos 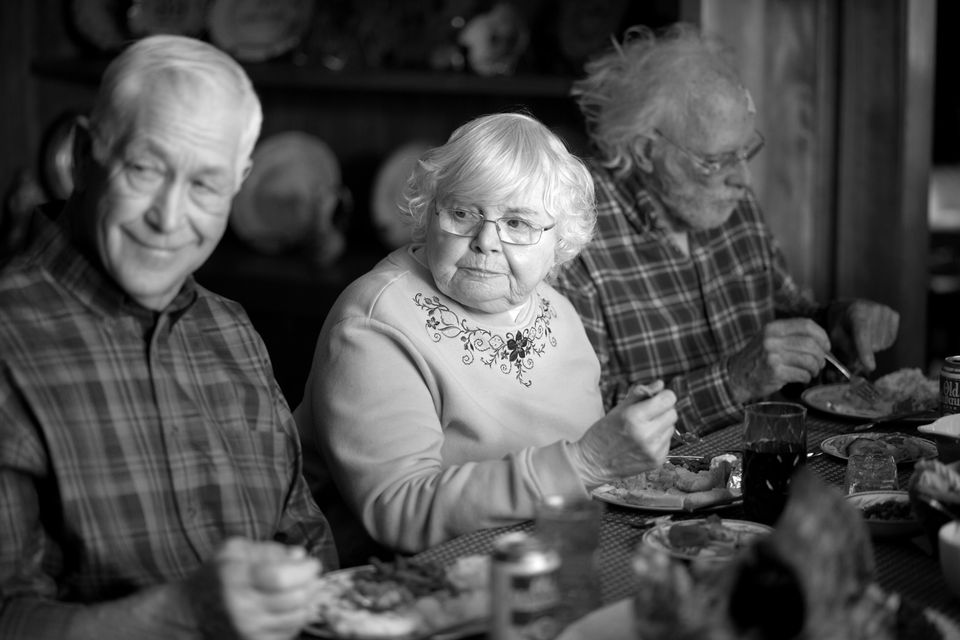 1 / 38
This image released by Paramount Pictures shows, from left, Dennis McCoig as Uncle Verne, June Squibb as Kate Grant and Bruce Dern as Woody Grant in a scene from the film "Nebraska," about a booze-addled father who makes to Nebraska with his estranged son in order to claim a million dollar Mega Sweepstakes Marketing prize. (AP Photo/Paramount Pictures, Merie W. Wallace)
AP