"In New York, I will announce that the government will change its position on the financing of coal-fired power plants abroad." -- German Federal Environment Minister Barbara Hendriks September 17th, 2014.

This exciting statement could substantially change what German overseas investments, from important institutions like KfW, support. That's particularly important for those concerned about the impacts the global coal industry has on our health and environment because Germany is currently the third largest source of international public financing for coal.

In fact, since 2006, Germany has invested 3.3 billion euros in new coal infrastructure. Any change to their support for this dirty and deadly industry will have real financial impact as well as strike a symbolic blow to the industry. 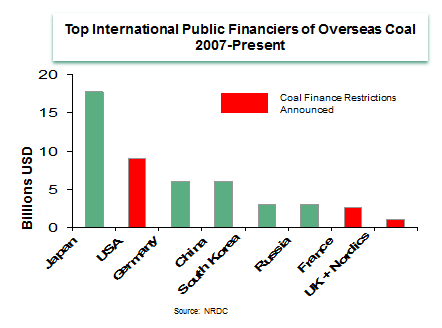 Since last summer, the World Bank, European Bank for Reconstruction and Development, European Investment Bank and the U.S. Export-Import Bank have all implemented narrow restrictions on coal support. A number of countries -- including the U.S., U.K., Netherlands, and Nordic countries -- have done so as well.

When it comes to public divestment from coal, the dominoes keep falling.

But as exciting as Germany's announcement is, the devil is in the details. Many observers are worried that there will be attempts to render Environment Minister Hendrik's announcement toothless by creating loopholes that the coal industry could drive a truck through. Those concerns stem from KfWs fierce defence of financing for new coal plants in the past, claiming that it is compatible with a 2°C climate target. Coupled with a regressive push by parts of the government like the Ministry of Economy which is fighting tooth and nail to make sure that the limitations don't apply to the funds they control, there is indeed cause for concern.

For instance, right now the announcement only covers the environment and development ministry's budgets. That leaves over half of all support coming from key trade promotion agencies -- like Euler Hermes and IPEX -- uncovered. The details for restricting support for overseas coal financing through those agencies are still being negotiated and therefore vulnerable to these regressive efforts.

One key concern is that these agencies will seek to continue providing support for "highly efficient coal-fired power plants/" This would constitute a gaping loophole in the announcement, and would be well out of line with international best practice.

In order to join the international community and make this announcement something civil society can embrace, KfW must follow the steps of other major institutions -- like the European Investment Bank and the U.S. Export-Import Bank -- and announce an Emissions Performance Standard (EPS) that restricts the carbon intensity of power plant investments.

This approach is far superior to KfW's current plan because it firmly aligns with a growing call to end support and investment for new unabated coal-fired power plants. An EPS achieves this by setting the investment standard between 500 - 550 grams of carbon dioxide per kilowatt hour, which only allows for coal-fired power plants that effectively capture and store their carbon emissions. 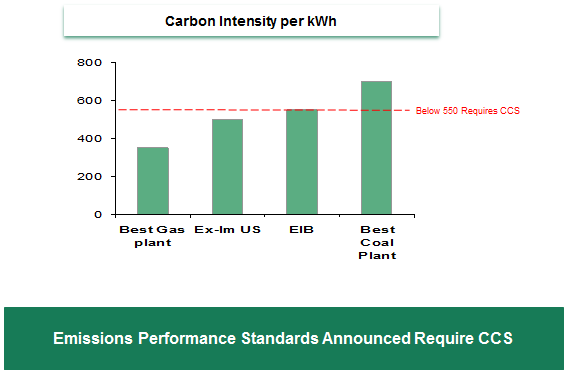 The German government will need to sort out these details after its announcement at the UN Climate Summit. If their proposal has weak criteria and large loopholes, it will be impossible for civil society to embrace what can and should be a climate victory for the German government.

If Environment Minister Hendriks' does announce a stringent, comprehensive limitation on overseas coal financing, in line with the international community, it would be exactly the kind of action that 100,000 environmental, labor, faith, and social justice activists will be marching for this Sunday in New York City at the People's Climate March, and its affiliated events worldwide.