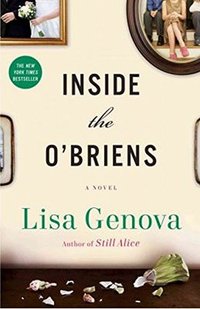 Huntington's disease isn't on the public radar like AIDS, cancer and heart disease. Aside from folk singer Woodie Guthrie, who died of the disease in 1967, Huntington's has no celebrity tie-in, no sexy spokespersons, telethons or million dollar media campaigns to raise awareness and fund research. Until now. Inside the O'Briens, the new novel by Still Alice author Lisa Genova, promises to do for Huntington's disease, what Still Alice did for Alzheimer's.

Huntington's disease is a genetically transmitted, fatal, neurodegenerative disease that strikes people in the prime of life. The victims of Huntington's inherit the defective gene from a parent who has Huntington's. The disease enacts a slow erosion of a person's physical stability and mental lucidity until they are no longer able to walk, talk or feed themselves. The initial attacks may go unnoticed--dropping something here or there, an uncontrollable shrugging of the shoulders, tapping of the feet, or fuzziness in concentrating on a task. By the time it's wreaked havoc on the victim, he/she is a blur of uncontrollable movement, unable to speak or even swallow. If that's not harsh enough, Huntington's victims are faced with a fifty-percent chance of passing the disease to their children. It's been called the cruelest disease known to man.

Genova takes this disease scenario and weaves it into the story of the O'Brien family. Set in the present day, patriarch Joe O'Brien is a Boston cop of Irish heritage. He's married to his high school sweetheart, Rosie, and together they have the perfect family of two sons and two daughters. Like with many families of Huntington's disease, Joe's mother was thought to be a violent alcoholic and died in a state mental institution. After Joe begins demonstrating physical tics that worry his family and friends--several of his cop friends think Joe is drinking while on duty--Joe learns he has Huntington's disease, and even though she was never diagnosed, he realizes it was his mother who passed it to him.

This scenario could have blown up into a Boston cop loses control during a tense police action and shoots an innocent bystander, which is where I initially thought the story would lead. Instead, Genova gives the story a more gentle--and likely more realistic--spin in delving into the mental progression of the disease experienced in the head of Joe, as well as the threat of inheriting the disease as seen through the view of his daughter Katie.

Thousands of families around the world receive devastating medical diagnoses every day. How one prepares for death defines a person. How the family embraces that knowledge and supports the stricken is critical in the transition through grief. As with many fatal diseases, grief begins early in Huntington's. Genova illustrates this most poignantly through Joe's wife, Rosie, a devout Catholic who takes refuge in her faith. The grief is driven forward when each of the O'Brien siblings are given the choice to take a genetic test to confirm or rule out whether they carry the defective HD gene. It's ironic enough that Joe is a police officer, a job which requires sharp mental clarity and top physical condition, but one of the O'Brien daughters, Meghan, is a prima ballerina for the Boston Ballet. The other daughter, Katie, is a yoga instructor. Then there's J.J. (Joe, Junior) who is a firefighter, married and hoping to start a family. The remaining son, Patrick, a ne'er-do-well bartender who still lives at home with the folks, seems to slip through it all without obvious concern.

Much of the story is taken up by which siblings do and which do not take the genetic test. It's a valid line of story and provides rich interior interest in Katie's mind. She has a longtime sibling rivalry with her ballet prodigy sister, yet struggles with the fear that Meg will be stricken with the disease and lose her career. Of course, she fears the diagnosis for herself and her other siblings, which Genova uses for generous insight into Katie's self-knowledge.

Meanwhile, we see Joe slide into the inevitable physical degradation that makes Huntington's such a brutal disease. Laws forbid the revelation of genetic information that may affect a person's job or welfare. This is rendered with a soft brush as Joe faces an early retirement from his beloved job as a cop. While losing his identity as a Boston cop is tough, Joe is yet to confront the worst of what awaits with HD. An attorney explains the twisted world of medical fees and the train wreck he and Rosie can expect financially as he loses his ability to care for himself.

We don't see the end of Joe's life, though we see him contemplate it. The suicide rate among Huntington's victims is considerable weighed against those who live through the progression of the disease. In a most stirring scene, his daughter sums it up for everyone watching a parent pass toward the unavoidable: "We don't know anyone else with HD. You're the only example we have. We're going to learn how to live and die with HD from you, Dad."

Those who read Still Alice will find similarities with Inside the O'Briens--both feature genetically passed degenerative diseases, both have primary characters who have stronger than average identification with their jobs, both characters lose their jobs because of the disease, both of these characters have offspring who must struggle with whether or not to take a genetic test. Most of all, these two books are brilliant insights into the minds of people with progressively debilitating neurological diseases.