As Americans reeled from the news that yet another U.S. citizen, Peter Kassig, was beheaded by the Islamic State group known as ISIS, the question remains whether such a horrific act will actually provoke a change in American public opinion.

At a political science conference on Friday, I presented research my students and I were working on about the subject of beheadings. We were trying to determine whether the killings of journalists James Foley on August 19 and Stephen Sotloff on September 2 had any impact upon U.S. public opinion. Are these gruesome killings going to make Americans think of all of Islam as an evil religion? And will they change U.S. views of the mission to destroy ISIS in Syria and Iraq?

Initial findings reported in The Huffington Post showed a spike in the number of Americans who felt that Islam was a violent religion, from before the beheadings until afterwards. Data is not yet available on that question for the post-Kassig public opinion. But it's not the first time we've seen several Americans beheaded. Therefore, my undergraduates and I worked to analyze what happened when Abu Musab al-Zarqawi and his al-Qaeda in Iraq cronies killed Americans like Nick Berg (in May of 2004) as well as Owen Eugene Armstrong and Jack Hensley (September of 2004).

The poll question, from the Pew Research Center, asked "Which statement is closer to your views, even if neither is exactly right? The Islamic religion is more likely to encourage violence, or does not encourage violence more." The percentage of those Americans responding that Islam encourages violence rose over 50 percent for the first time ever, after September 2, 2014, while only a little more than a third held those views as recently as July of 2014. 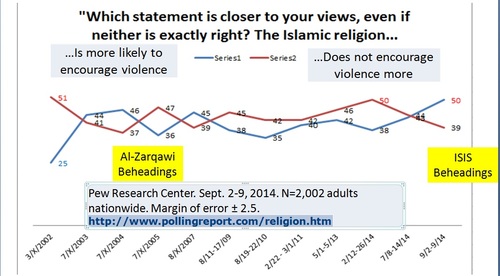 But when asked that same question during the al-Zarqawi beheadings, there was little change in the views of Americans on that subject. Only a minority of Americans believed that Islam was a violent religion, and that perception rose and fell, regardless of the acts of barbarity against these U.S. civilian contractors, or other Americans or victims from other countries.

In a similar vein, al-Qaeda's beheadings had little influence on Americans views of how well things were going in Iraq. Such Gallup poll numbers increased or decreased, with little regard for al-Zarqawi's actions, or even his death. Americans may have been more influenced by the sectarian civil war, the prison conditions of Iraqi detainees at Abu Ghraib, whether weapons of mass destruction like nukes were ever found, the growing number of U.S. military casualties, whether Iraq could form a government after elections, or our eventual withdrawal.

What we learned was that the beheadings in Iraq from 2004 to 2006 may have been dwarfed by other stories. But the recent events like the killing of Kassig and others is front and center, which means that Americans may be more likely to judge Islam as evil, and even affect the views of our foreign policy actions in Iraq and Syria.