In a horrific flash of bombs, bullets and blood, the ISIS attack on Paris immediately altered our political discourse. Our previous national focus on economic inequality is being drowned out, at least temporarily, by incessant calls for boots on the ground, no-fly zones, embargoing Syrian refugees and demands for increased surveillance -- the stuff of which the right thrives upon. Will the Sanders campaign also become a casualty of the ISIS assaults?

Here are 10 crucial economic facts that provide the glue for the Sanders message. These trends run so deeply and so powerfully throughout our economy and society, that nothing short of total war psychosis is likely to remove them for long from the public discourse.

Senator Sanders, of course, must also credibly address the chaos in the Middle East and key national security issues. But, as these charts show, the economic unfairness that gave birth to his campaign will not go away by itself. Runaway inequality is here to stay....until we build a massive movement to alter it. (These charts are taken from Runaway Inequality: An Activist's Guide to Economic Justice.)

1. The rich are getting richer, the rest of us are not.
There always has been a significant gap between the top 1 percent and the rest of America. But that gap was kept under control largely through governmental tax, banking and labor policies.

You could make a lot of money in this country, but after the New Deal, unions made sure you paid a decent wage to your workers, and government made sure the wealthy provided ample tax revenues. This allowed working people also to enjoy a rising standard of living. (By no means was this the Golden Era. People of color, women, gays and lesbians suffered acute discrimination. But, economic improvement did reach most sectors of society.

But as the chart below shows the bond has been broken. After 1980, the incomes of the top 1% exploded while the wages of the bottom 90% stagnated....and not by accident. 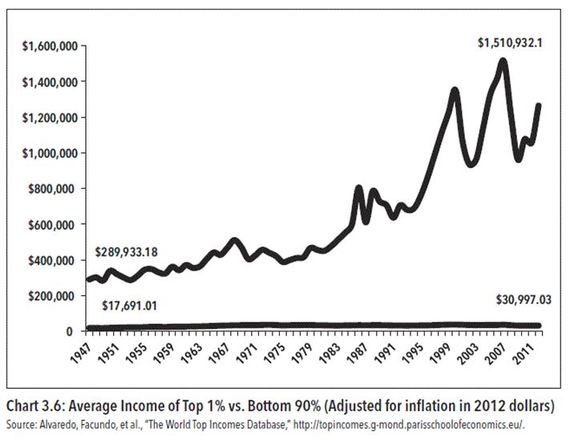 2. Wall Street/CEO Greed
Most of us haven't had a real raise (after inflation) for more than a decade. Meanwhile we see our CEOs and their Wall Street partners rake in astronomical sums. The data backs up what we see and sense. As this chart shows, the gap between the pay of the top CEOs and the average worker has jumped from 45 to 1 in 1970 to an astounding 829 to one today.

The game is rigged and Sanders is calling them on it. 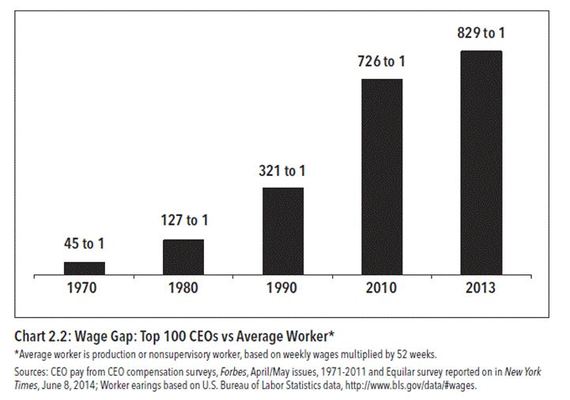 3. The biggest banks are getting bigger
One of the most outrageous economics facts of life is the engorgement of too-big-to-fail banks. We are told that they now are under control. But nothing could be further from the truth.

The top four banks have grown even larger since the Great Recession. No wonder crowds roar when Bernie says "If a bank is too big to fail, I think it's too big to exist." 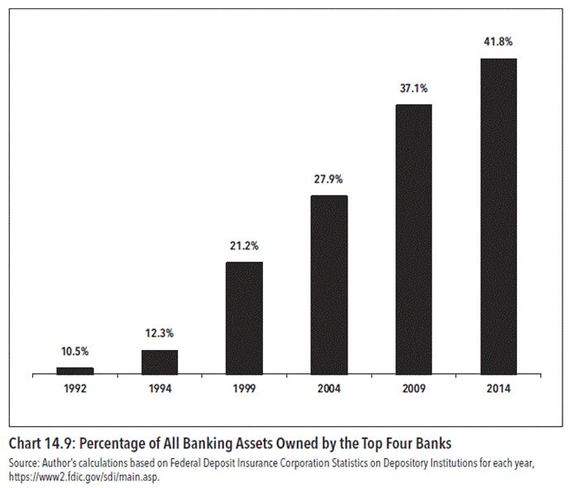 4. Students are crippled with debt
Sanders wants to tax Wall Street speculation and use the money to fund free higher education. And for good reason. Debt peonage is hitting college students as banks load them up with onerous loans. Sanders believes it's time for us to catch up with many other developed nations that already provide free higher education. 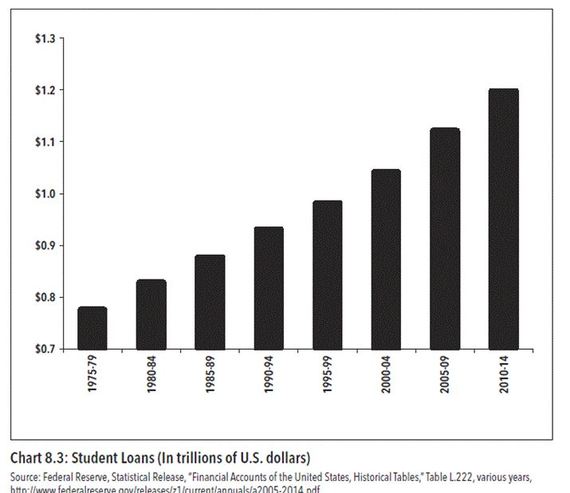 5. We lead the developed world in child poverty
Nothing more clearly reflects the values of a country than how it treats its children. And nothing is more painful and inexcusable than children living in poverty.

The countries of northern Europe - Iceland, Finland, Nether¬lands, Norway, Denmark and Sweden - have nearly eradicated childhood poverty. These also are the countries that have the lowest levels of inequality. They have made a conscious choice: less inequality, less child¬hood poverty.

But in a country like ours so engulfed by runaway inequal¬ity, child poverty becomes the responsibility of the poor. In other words, if your kids are poor it's your fault. Don't expect society to feed them.

Bernie does indeed expect society to feed the poor. And so should we. 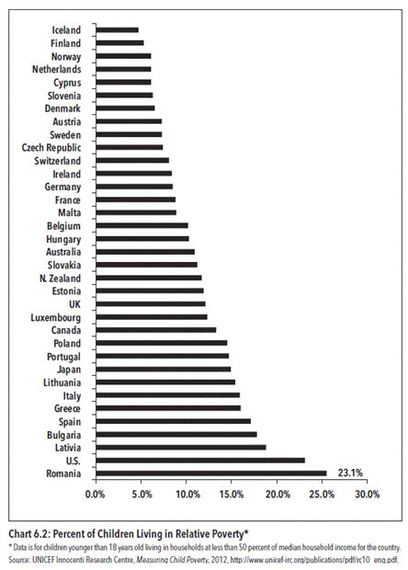 6. You can't live on the minimum wage
America is the only country in the developed world in which you can work full time and still live in poverty. That's because our federal minimum wage is a disgrace. As the chart below shows, the real buying power of the minimum wage, after taking into account of inflation, has been on the decline since its peak in the 1960s. That's why one of Sanders' biggest applause lines is

"A minimum wage of $7 an hour is a starvation wage. I applaud those cities-- Seattle, Los Angeles and others--that have raised the minimum wage to $15 an hour. And that is exactly what we will do at the federal level." 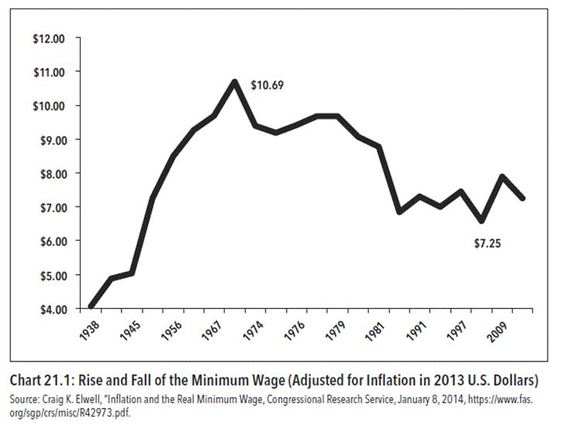 7. The tax system favors the rich
We all know that the rich are not paying their fair share of taxes. They hire the best lawyers to help make their incomes vanish on IRS papers. They shift money abroad. They use their influence to create and abuse loopholes. And they sell us the lie that decreasing taxes on the rich make all boats rise.

The chart below shows the result on the state and local levels. The sad truth is that the poorer you are, the more you pay as a percent of your income. 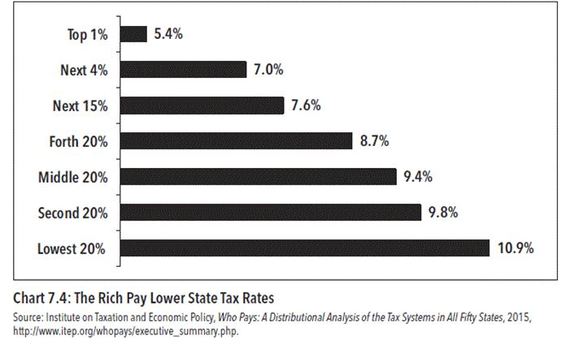 8. The rich buy the political system
As our economy fractures under the weight of runaway inequality, so does our entire democracy. Money is pouring into politics, especially since the Citizens United Supreme Court ruling. As the chart below makes clear, corporations and financial institutions are taking full advantage as they flood the political process through Super PACS.

9. "The American Dream" is fading away
Many Americans still believe in the American Dream -- the idea of genuine upward mobility. We cherish the idea that our children will do as well or better than we have done.

But we're getting a wake up call.

The chart below shows that the odds of rising above your father's economic position in the U.S. is about 50/50. In Denmark, you have about a seven to one chance of doing better.

No wonder Bernie wants us to learn a thing or two from the Danes. 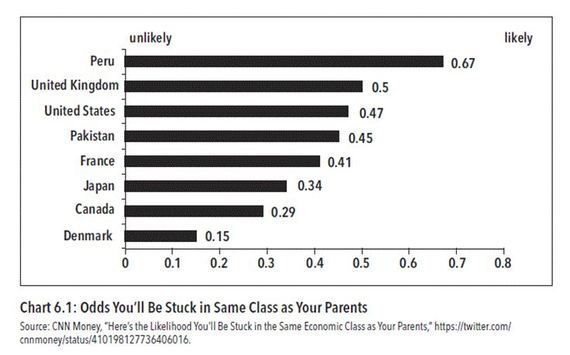 10 The largest police state in the world
Freedom pays the price for runaway inequality. Because we refuse to use government to provide decent paying work for all those who are willing and able to work, we leave vast tracks of our cities mired in poverty.

We allow institutional racist practices (especially in housing, education and criminal justice) to trap more people of color on the lowest rungs of the economic ladder.

Instead of a War on Poverty we have declared war on the poor.

As a result, we now have more prisoners both in absolute numbers and as a percentage of the population than any country in the world. And if you compare the chart below with the first chart in this article, you'll find that the incarceration surge started with the onset of runway inequality. 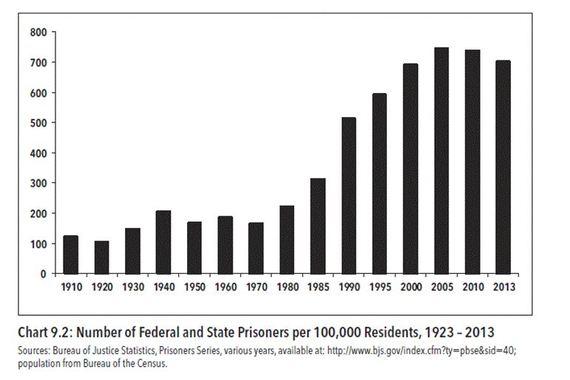 Taking them on
Perhaps Bernie's biggest applause line is the one that sets us on our course. His campaign cannot succeed in one election. We will have to engage in years and years of mass political struggle to defeat runaway inequality.

"This campaign is sending a message to the billionaire class: Yes, we have the guts to take you on."

Les Leopold is the director of The Labor Institute in New York and author of Runaway Inequality: An Activist's Guide to Economic Justice. (Oct, 2015).