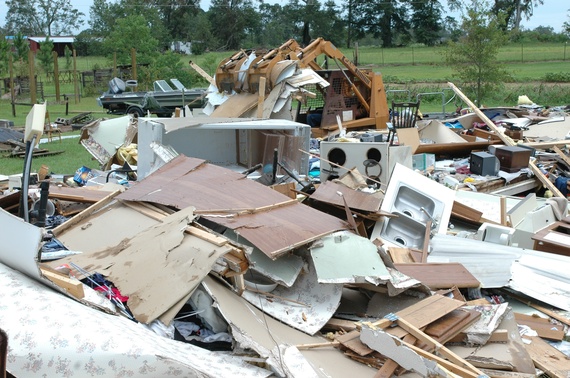 I was having my computer serviced at the Pentagon City Mall in a D.C. suburb last week when I discovered that the mall does not recycle. Really? In 2015? The computer folks recycle them themselves.

This shopping mall is managed by Simon Properties, a huge global property management company whose website says it operates 109 malls, 68 "premium outlets," and about 65 other properties, and has a "commitment to sustainability." It says 100 percent of their malls recycle "plastic film," whatever that is, but I guess it isn't normal beverage and food containers. Think of how many plastic bottles, aluminum soda cans, and plastic food containers are generated by a shopping mall with a food court... maybe millions of recyclable units per year, I imagine.

Will Pope Francis' much-awaited environmental encyclical "Laudato Si - Our Care for Our Common Home," make the leaders at Simon Malls recycle more beverage and food containers? I doubt it.

The Pope's call to action on climate change has generated much press coverage and applause from environmental supporters across the political and economic spectrums. I too am grateful that the leader of 1.2 billion faithful chose to make such a strong argument for action to avert the economic, environmental and social catastrophes that will ripple across every country and affect every person on earth as a result of (man-made) climate change.

But will it matter?

Will business and political leaders who have been intransigent on environmental and energy initiatives suddenly take action because The Pope said it's important? Not likely.

Pope Francis talks about real change and has demonstrated impressive courage, but the Carbon Trust recently reported that "businesses' action on environmental sustainability today is significantly short of what is required to address the serious challenges of climate change and resource scarcity."

This is despite significant cost savings potential; for example, Ceres reports that the Fortune 500 companies collectively saved over $1.1 billion using renewable energy.

They'll reap revenue rewards too. Consumers say companies that do act sustainably will be rewarded with loyalty (88 percent), trust (90 percent) and sales, with 80 percent saying they would even switch brands for "strong social and environmental commitments," according to a recent Cone Communications survey. These consumers are loud too: 61 percent said they "are using social media to address or engage in CSR" (corporate social responsibility).

How can companies step up to the sustainability plate, and preserve natural and economic resources in the process?

Here are lessons from my interviews on Green Connections™ podcasts, with many sustainability leaders, including those from Dell, MGM Resorts, Facebook, Campbell Soup, Intel, Whole Foods, governments and clean tech:

1. Leadership from the top:

It has to be spoken about and acted on - repeatedly and visibly - by the CEO and the leadership team.

Some CSOs told me they can only talk profit and loss internally (not sustainability) to get internal teams to make sustainable decisions. Do what works to get action, and reward it.

Innovation comes from having people at the table who each bring a different experience. Yes, we need more women and minorities sitting at those leadership and decision-making tables (are you listening, Pope Francis?). We also need diverse experiences. Mix up entrepreneurs and career employees, engineers and communications folks, people from various ethnic cultures, urban and rural.

Cindy Ortega of MGM Resorts told me that sustainability goals are an integral part of the compensation and performance evaluation systems of their executive team. More companies should do so.

5. Forecast the impact: Just as you forecast sales and expenses, your company or municipality can forecast environmental and energy impacts. For example, Environmental Gaming, pioneered by international environmental consulting firm Marstel-Day* simulates the environmental and stakeholder impacts of strategic decisions, before you commit resources.

6. Do the little stuff too:

Don't assume your team is recycling, turning off the lights and water, and doing other basic energy, water and waste-saving measures. Make it easy for them to do so.

I admire the Pope for using his bully pulpit to motivate and inspire his enormous flock to "start with the man in the mirror," to quote Michael Jackson. I hope it has a bigger impact than I expect.

Which begs the question: How "green" is the Vatican's supply chain and investment portfolio? Does the Vatican recycle? Maybe the Pope can at least inspire the folks at Simon Properties to recycle more. I wonder if they're Catholic...

*Full-disclosure: Marstel-Day is a client of Green Connections Media