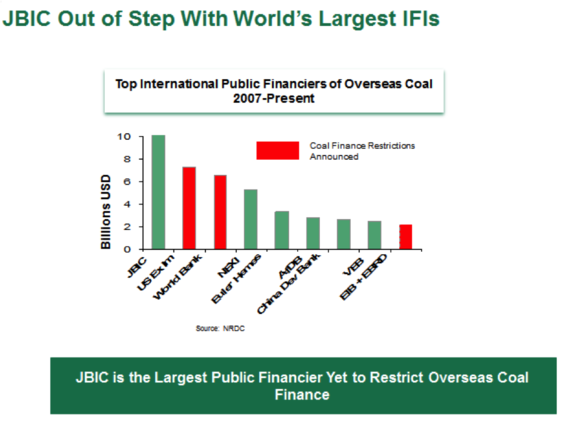 As an ever-expanding number of international financial institutions restrict their support for new coal plants overseas the worlds policymakers are now turning their attention to the one nation that stands out for its refusal to join the international community - Japan.

Japan is currently the largest source of finance for new dirty coal plants overseas and the prime conduit for this river of coal cash is the Japan Bank for International Cooperation (JBIC). With International financial institutions announcing new restrictions left, right, and center Japan's open support for this polluting industry is increasingly isolated and Japanese civil society groups want their government to know it.

Japanese civil society has decided to shine a spotlight on the gap between the international community's stance on coal and JBIC's lofty rhetoric of supporting projects aimed at "reducing greenhouse gases" in developing countries. Their new campaign "No Coal, Go Green!" aims to move the institution firmly into the 21st century - by ending support for dirty 19th century technologies.

The pressure this campaign will bring to bear on JBIC is incredibly important to stemming the expansion of the coal industry globally. Over the last decade, JBIC has pumped nearly $12 billion USD into 21 coal-fired power projects scattered around the globe. In a single year alone, on average, JBIC-supported plants emit 120 million tons of carbon dioxide emissions, the equivalent of a tenth of Japan's annual emissions and half of the country's emissions from its own domestic coal-fired power generation fleet. Even the relatively higher efficiency coal plants they export which burn less coal per unit of electricity, generate greenhouse gas emissions that are clearly unacceptably high.

Of course it's not that JBIC is in denial about the reality of global warming. In its corporate profile JBIC lists one of its four operational priorities as promoting "overseas business having the purpose of preserving the global environment, such as preventing global warming." JBIC goes on to state that "climate change mitigation is an urgent issue for the entire world, and the demand for capital is increasing. JBIC supports projects undertaken in foreign countries that are having a favourable impact on the preservation of the global environment, including construction of renewable energy power plants...".

This makes JBIC's ongoing support for coal projects even stranger. Why would a bank whose stated mission is reducing climate change fund the single most carbon intensive fuel source on the planet? More importantly, why would it continue to support these investments despite a growing consensus amongst the international community that coal is simply no longer an acceptable fuel source deserving of public support in a 21st century chock full of cheap clean energy alternatives?

It's tough to tell but sadly climate impacts aren't the only destruction wrought by these coal loans. Most recently JBIC is considering its support for South East Asia's largest coal plant a 2 GigaWatt plant in Indonesia, which is heavily opposed by local communities. There are reports of violence and intimidation imposed on local communities who have refused to give up their land leading to an international open call for JBICs withdrawal. Just this week Greenpeace Indonesia and local farmers called on the Indonesian government to halt the proposed US$4 billion power station due to its likely impacts on local farmers and residents who are staunchly opposed.

However, their opposition has come at a price with local landowners reporting that police have been turning a blind eye to efforts to intimidate farmers into selling. "They've recently tried to intimidate us and sometimes they use violence if we refuse to sell our land. But we are not going to give up because this is all we have," said Boy, a local fisherman.

As opposition to new coal projects grows - whether from farmers and fisherman in Indonesia or from national governments recognising that the coal-fired era is drawing to an end - JBIC and the government of Prime Minister Shinzo Abe now face a stark choice. JBIC can either align its lending policy with the international community by excluding coal, or it can risk its international reputation by supporting devastating projects like Batang. If it chooses the latter, it will be amongst international lenders of last resort for unwelcome coal projects. A role that history will not look kindly upon.