Speaking on the phone about his most recent video project, A Line Describing the Sun at Pierogi's Boiler Room, Will Lamson says:

I can't have a huge production crew, but I don't need one. I have my car and a camera on a stepladder. My assistant and I push the car. We roll it back and forth to smooth a path. Then we've made an anti-shake device for a tracking shot of the desert. 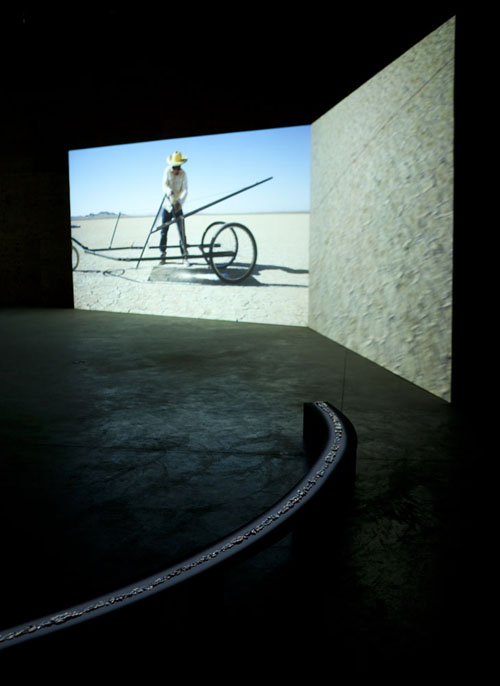 Lamson always seems to say things like this as if everyone drives around with a stepladder on their car to get scintillating imagery of the land. One of the many clever twists of his work that is that the machinations and actions that occur are instilled with logic even when the very nature of their existence is extremely surprising. This is invention at it's finest. 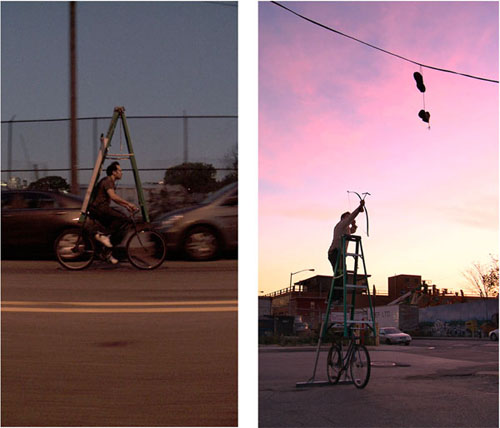 Video stills from Hunt and Gather, 2008

In a 2009 project dealing with tidal forces and the history of Manhattan called Time is Like the East River, Lamson split a canoe in half and then joined the two parts together in a performance in New York City's harbor. 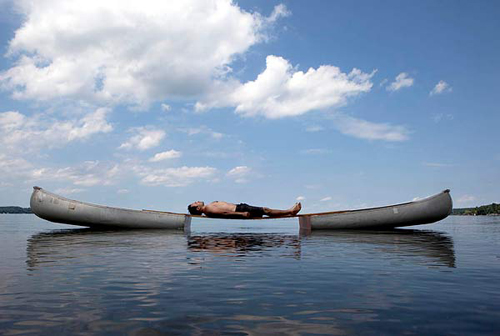 Say you were to halve a canoe. Go ahead, try it. Now attempt to make it float and assure it's navigability. Try paddling it by oil tankers. This is the kind of problem Lamson deals with all the time. He is engineer and artist all at once, using systems, tools and operations to highlight the method and madness behind our actions. Videos such as Emerge from 2007 deal with some of these ideas.

While wit and play are a big part of Lamson's projects, temporality is perhaps a more consistent theme. In A Line Describing the Sun, supported by the Center for Land Use Interpretation and the Experimental Television Center, he uses a Fresnel lens on a mobile structure to focus the solar energy:

Into a 1,600-degree point of light that melts the dry mud, transforming it into a black glassy substance. Over the course of a day, as the sun moves across the sky, a hemispherical arc is imprinted into the lakebed floor. 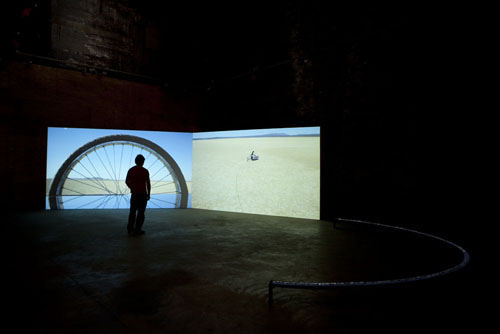 Be sure to go to Pierogi to see Lamson's work but in the meantime, feast on the clip below.

Lamson looks both omniscient and minuscule in this video. He highlights this duplicity with the dual channel installation. In one moment he is searing the earth, literally creating a glassy trail of his power. In the next the camera pans out and Lamson's tiny form seems as if it could blow away in a gust. We are indeed small in the world and A Line Describing the Sun reinforces this fact while also asking us to question our intentions and exertions on the land. 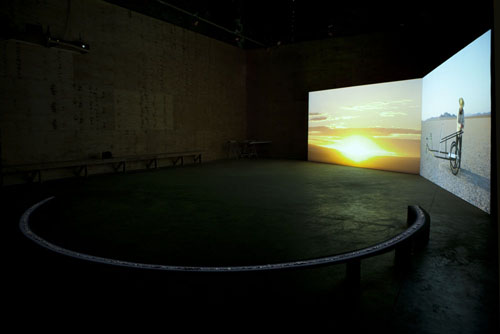 Laugh if you want at the inanity of some of his actions, but Lamson is the kind of jack of all trades who may just one day invent the car ladder that will change the world. As he says about A Line Describing the Sun:

I was testing. I had one set of assumptions about what would happen and then I had to change things when I got to the desert. I find that the simplest design is what's important. Ingenuity is fundamental. If you know what you want you can figure out other ways. It's not fun while you are doing it necessarily but the payoff is big.

The payoff is definitely big in this new video. The barren landscape that the artist traverses with his burn rig is mesmerizing. Paired with this, Lamson's aggressive act of mark-making is soothingly quiet and dogged in the starkness of the rugged environment. 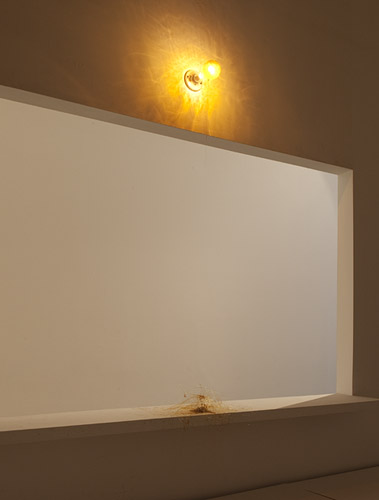 To see Lamson's new work head to Williamsburg where you'll find Pierogi's new Boiler Room space or check out his caramel light bulb sculpture in constant disintegration at Spencer Brownstone. He'll be busy in the next few months, next up is a show in November at the Kunsthalle Erfurt.