It is hard to say what is going to happen, but there is reason for concern and our domestic media is not addressing this increasingly deteriorating situation.

Sectarianism In the Taif Agreement that helped bring an end to the civil war that lasted from the mid 1970s until 1990, the National Pact was restructured so that the president is a Christian, the prime minister is a Sunni, and the speaker of the parliament is a Shiite. In a country of 6.1 million people, smaller than the population of Massachusetts, the religious demography of the country is approximately 40 percent Christian, 27 percent Sunni, and 27 percent Shiite. The president is elected by the parliament; the parliament is elected by the people. In the increasingly polarized sectarianism sweeping the Middle East, for the past year, the parliament has not agreed on a president. So there is a vacuum of leadership in that important office. Adding insult to injury, the parliament has not held elections and extended the term of its current members.

You Stink Campaign!As the squabbling has continued over the past year, the responsibilities of civil service have been neglected. The central landfill used by Beirut is full. The parliament has not done its job to find a suitable replacement. As such, since July 17 more than 20,000 tons of trash have accumulated on the side of the streets all over Beirut. The people call the protests a part of the "You Stink" campaign. Rats and disease are on the rise. When the stench has become unbearable some citizens took to burning the trash to ash but this has resulted in toxins being released into the air that citizens breathe.

Weakened Police LegitimacyAs one would expect, civilian protests have erupted, which is permitted under their constitution. However, a few protesters turned the situation on its head by throwing Molotov cocktails at the police. The police responded by firing rubber bullets, tear gas and water cannons at the citizens. The prime minister, who runs the government, said this was an excessive use of force. Police legitimacy is one of the core tenants of any stable society. Prime Minister Tammam Salam has urged restraint among citizens and threatened to resign over the crisis.

Crumbling Economy Compounding these woes at the local level, Lebanon's credit rating is a B-. The CIA World Factbook states

"Spillover from the Syrian conflict, including the influx of more than 1 million Syrian refugees, has increased internal tension and slowed economic growth to the 1-2% range in 2011-13, after four years of averaging 8% growth."

Its revenues are around $10 billion and its expenditures are around $15 billion. Lebanon is looking at getting a "failed state" rating by the credit agencies. The CIA further stated

"Weak economic growth limits tax revenues, while the largest government expenditures remain debt servicing and transfers to the electricity sector. These limitations constrain other government spending and limit the government's ability to invest in necessary infrastructure improvements, such as water, electricity, and transportation."

The consequence of this could be similar to what we saw in Greece, but possibly with worse security implications.

Enter ISIS?In 2014, the Lebanon Daily Star reported "ISIS militants attacked four Hezbollah posts on the outskirts of the northeastern border town of Ras Baalbek Tuesday in a failed bid to capture two hills." To evade arrest, an ISIS milintant attacked a hotel in Beirut in June 2014 when he detonated a bomb intended to kill authorities searching the hotel for ISIS, there are numerous examples of ISIS openly threatening the security of Lebanon, and even being thought to declare war on Lebanon.

ISIS took advantage of the failure of the central governments to keep control of civil society in Syria and Iraq. If Lebanon's government collapses, which is ultimately unlikely, it is possible that ISIS may try to fill the vacuum in the absence of effective leadership. Nonetheless, a weakened Lebanese government would embolden ISIS.

ISIS' tentacles have been spreading and support is inching towards Lebanon. 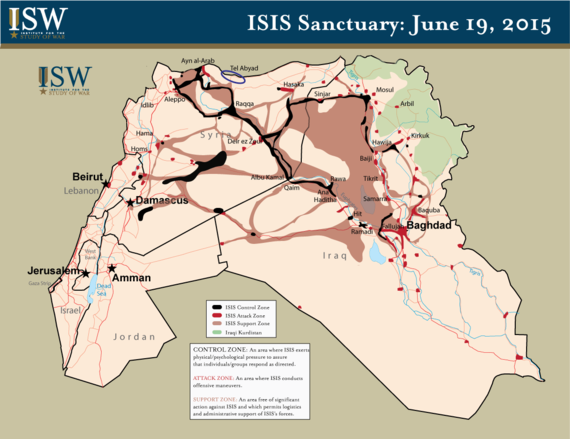 ISIS has been gaining ground in Syria, which is the north and east of Lebanon, as well as in Iraq. ISIS in Lebanon would be a massive problem for a number of reasons. In addition to gaining more ground that would make it harder to turn back the tide on the growth in ISIS, much of Lebanon's resources and armaments could be compromised. Additionally, Israel is located directly below Lebanon so their border security could be threatened.

PAUL HEROUX is a state representative from Massachusetts who previously lived and worked in the Middle East, was a senior analyst at the Institute for Defense and Disarmament Studies, and is a frequent guest on TV and radio stations discussing the Middle East. Paul has a Master's in International Relations from the London School of Economics and a Master's from the Harvard School of Government. Paul can be reached at PaulHeroux.MPA@gmail.com.