On a Saturday afternoon in the fall of 1984, a few weeks before the November election of that year, a white man walked into the Greenville, Mississippi campaign office of Robert Clark, the first black person to win a Democratic congressional nomination in Mississippi since Reconstruction.

As the press secretary for Clark, I happened to be in the mostly empty office that day. The white man (I long ago forgot his name) looked like he had just walked out of a Mississippi country club after a round of golf. He wore pink pants and a green-and pink-checkered sports jacket. In his right hand was a briefcase. The man entered into the office of Clark's campaign manager, heaved the briefcase onto a desk and opened it.

Standing right outside the office, I watched as he and the campaign manager counted stacks of cash wrapped in rubber bands. I don't know how much money was inside the case, but I guessed at the time at least $20,000.

After organizing the stacks of money, the white man lined up chairs in the middle of the campaign office. Not long after, around 20 or so older black gentleman dressed in black suits and ties began arriving. They automatically took a seat in routine fashion. The white man welcomed them to the office, introduced the campaign manager and handed out an equal amount of money to each man. The campaign manager said a few words about the importance of getting out the black vote. They nodded and left.

Later, I learned they were black ministers who would use the money to turn out their black congregations for Clark. I asked the campaign manager why we needed to pay black ministers for GOTV for a black candidate. His answer: Because they have always been paid for GOTV. Just because Clark is black doesn't change anything.

I am confident a similar scene played itself out somewhere last week when Mississippi voters marked their ballots, re-electing U.S. Senator Thad Cochran as the Republican nominee for the Senate seat and defeating Tea Party candidate Chris McDaniel.

For decades, Mississippi Republicans and Democrats have paid black ministers to appeal to their congregations to vote for their candidates. In white-on-white elections of the past, there often has not been a dime worth's of difference between the two candidates - Republican or Democrat. So taking money for pulpit endorsements and what's known as "walking around" money wasn't a hard decision because it meant a little bit more cash for whatever ministerial bills there were to pay; maybe a kick start for a new roof church fund or Vacation Bible School supplies.

This time, though, there was a big difference between the two candidates, and black voters in Mississippi made all the difference.

Most of my Mississippi Democratic friends, white and black, like Cochran because he's brought home the bacon for decades and has developed strong ties with the black community over the years, even though his votes rarely line up with their interests.

They also feared the Democratic nominee, Travis Childers, would not be able to defeat McDaniel, if he won the primary. Check out this ad that onc of my friends took out in a Washington County local newspaper in the Mississippi Delta. 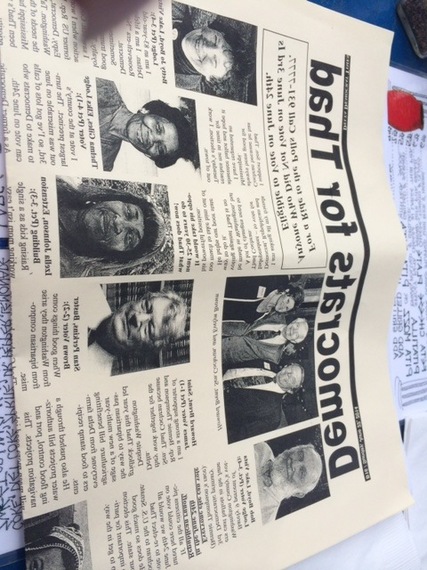 It was a pragmatic decision that some Democrats in Mississippi have criticized believing Childers could have beaten McDaniel in the general. Rabid conservatives across the country have decried Cochran's black votes as illegitimate, and Tea Partiers are threatening to run an independent in the general, which could help elect Childers in November.

Whether paying black ministers to encourage their congregations to vote for a candidate and then providing them "walking around" money is legal or not, I don't know. I know the people who organized the GOTV efforts in black communities that I knew about needed to rent buses or cars to take people to the polls and buy gasoline and lunch for the door knockers. And, if there was some money left over, then it was up to the ministers to decide how to spend it.

Interestingly, the Cochran/McDaniel election was a backstage topic at the 1964 Freedom Summer commemoration at Tougaloo College in Jackson, Mississippi that ironically got underway the same day as the runoff. I say "backstage" because the real focus of the commemoration was renewing the relationships between black Mississippians and whites, mostly from out of state, who 50 years ago came to Mississippi to help register blacks to vote and raise awareness of injustices.

It didn't take long after that violent summer for whites to begin voting as Republicans, and party leaders, like Mississippian Haley Barbour (now a national GOP leader) to begin courting black ministers and other black leaders in secret to help push their candidates over the finish line in white-on-white elections.

In 1984, though, the black vote wasn't enough to elect Robert Clark. He lost by less than 2 percent of the vote in a congressional district with the highest number of black voters in the country. Two years later, a young assistant attorney general named Mike Espy, a black man, followed in Clark's footsteps, built a better campaign organization and won.

Espy became the first black man elected to Congress from Mississippi since Reconstruction, with the help of the campaign structure put into place by Clark, two years earlier.

I saw Clark not long after Espy was elected, and I asked him about the day in the Greenville campaign office: Why did you pay the black ministers to endorse you?

He said, "Who says I paid them? I have Haley to thank for that."

Meanwhile, Freedom Summer participants wondered out loud if a black Democrat could build a coalition with the white Republican establishment in Mississippi to take Cochran's place one day?

They couldn't imagine it, but they also wondered how black Mississippians would be rewarded for putting Cochran over the top.