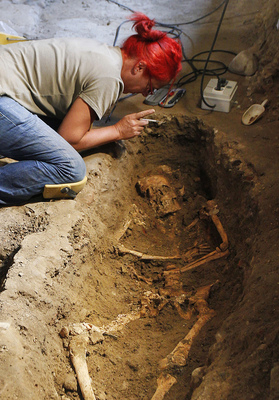 Centuries after her death on July 15, 1542, Mona (Madame) Lisa Gherardini del Giocondo is still making headlines. Over the last two years journalists from around the world have descended upon Florence to report on dramatic excavations of skeletons that may--or may not--belong to Leonardo da Vinci's model and her family. The results of the latest round of laboratory analyses are expected soon.

"What are the odds of identifying Lisa Gherardini's remains?" I asked Silvano Vinceti, a self-styled cacciatore di ossa (bones hunter) who is spearheading the high-profile quest, during an interview in Florence. 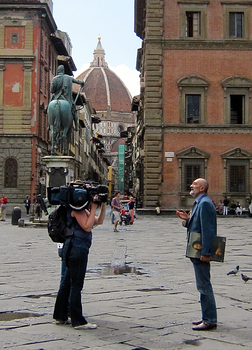 No one knew the whereabouts of Mona Lisa's remains until 2007, when Giuseppe Pallanti, author of Mona Lisa Revealed, reported his discovery of her recorded death at the convent of Sant'Orsola. After her husband Francesco del Giocondo died in 1538, his widow moved to the nunnery where their youngest daughter had taken vows -- located just steps away from the family home. Upon her death in 1542, Mona Lisa was buried, not in the del Giocondo crypt in Florence's Basilica of Santissima Annunziata, but at the convent.

Such arrangements were not uncommon. Privileged women who had the power to choose their place of burial, notes historian Margaret King in Women of the Renaissance, "overwhelmingly preferred to lie in community with other women" rather than with husbands or fathers. With this final choice, a woman could refute "all the past decisions" men had made during her lifetime.

Sant' Orsola, deconsecrated under Napoleon in the early 1800s, served as a tobacco processing plant and university lecture hall before deteriorating into a hulking, boarded-up, graffiti-smeared ruin (below). "The shame of Florence," an editorial writer branded it, and Florentines have long clamored for a clean-up of the urban eyesore. 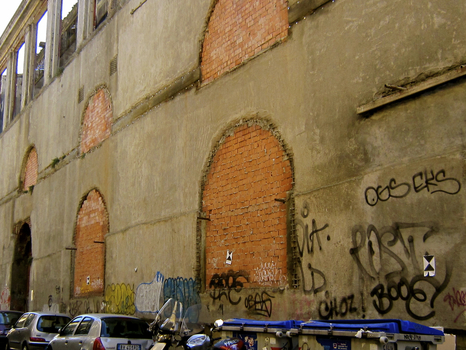 In 2012 Vinceti, creator of the official-sounding National Committee for the Promotion of Historic and Cultural Heritage, stepped before the floodlights of international television crews gathered at Sant'Orsola. His team of volunteers, he announced, had unearthed several skeletons in a crypt beneath the chapel. Three date back to the sixteenth century.

Does one belong to Lisa Gherardini? Since hundreds of women lived and died at Sant' Orsola, the only way to find out is by matching DNA from bones or teeth to that of a known blood relative. The prime candidate is Mona Lisa's oldest biological son Piero del Giocondo, who died at age 73 in 1569 and was buried in Santissima Annunziata (in the dark chapel to the left in the photo below). 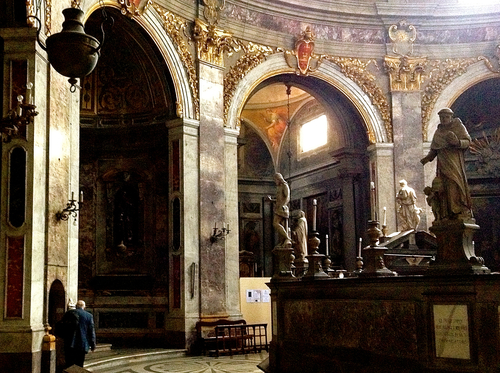 Earlier this year investigators lowered themselves into the subterranean tomb and broadcast ghoulish images of crumbling skeletons on stone shelves. At least in theory, a match between DNA from a corpse in the del Giocondo crypt and a sample from one of the Sant'Orsola bodies could identify Piero and his mother Mona Lisa. However, given the badly decomposed remains, laboratory technicians said they were not optimistic.

If the tests should indicate a genetic match, Vinceti, who has no credentials in art history or forensics, says he will commission a reconstruction of Mona Lisa's face that would be "clear enough to see what she really looked like"--a claim academicians vigorously challenge. Leonardo himself might not recognize his twenty-something model on the basis of a reconstructed skull of a 63-year-old female who has been moldering in a grave for 472 years.

Certainly no skeleton or reconstruction can reveal the three-dimensional woman whose smile haunts us still. What, then, is the point of the quixotic quest? A boost for Florence tourism, insists Vinceti. A genetic identification might ignite support for restoration of blighted Sant'Orsola as a fitting resting place for Florence's long forgotten daughter.

Yet far more intriguing than the bones she left behind is the life the real Mona Lisa led -- as a daughter of Renaissance Florence, a merchant's wife, a loving mother and an artist's unforgettable muse.

Author of the best-selling LA BELLA LINGUA: My Love Affair with Italian, the World’s Most Enchanting Language and MONA LISA: A Life Discovered.