No. On the contrary, they might just save it by helping stimulate new technologies and industries and by reducing the risks of climate disruption.

There is a long history of claims that new rules to protect the environment or human health will seriously harm the United States economy. These claims are political fodder, they are provocative, and they are always wrong. In fact, the evidence shows the opposite: environmental regulations consistently produce enormous net benefits to the economy and to human health. In 2008, for example, the United States' environmental technologies and services industry supported 1.7 million jobs. The industry at that time generated approximately $300 billion in revenues and exported goods and services worth $44 billion.

Overall, a peer-reviewed 2011 study found that just the programs established by the 1990 Clean Air Act amendments were expected to yield direct benefits to the American people that vastly exceed costs of complying with the regulations. The study's central benefits estimate in 2020 exceeded costs by a factor of more than 30-to-1.

And these partial economic assessments ignore the health benefits of these rules. Health experts
have estimated
that the 1990 Clean Air Act amendments, for example, for 2010 alone:

Now, as the Obama Administration has proposed rules to cut carbon dioxide emissions in an effort to reduce the growing threats to the nation of climate change, these claims of harm to the economy are being rolled out again. Even before the Obama Administration's rules were announced, the U.S. Chamber of Commerce issued a report claiming the carbon pollution regulations would harm the economy. That produced a fast response from the US EPA calling the report "irresponsible speculation." (The Chamber also opposed the 1990 upgrade of the Clean Air Act and routinely fights other environmental regulations.)

Some polluting industries might suffer, but it is past time to unleash American ingenuity in the name of reducing the devastating threat of climate change.

Just to provide a bit of perspective, here is a graph of the total U.S. gross domestic production (GDP) in 2009 dollars (corrected for inflation) along with the regular claims of harm to the economy. 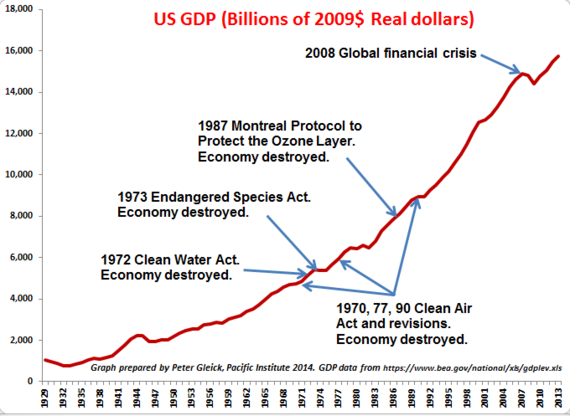 Figure. Claims that environmental laws will destroy the economy have been regularly made and are consistently false. This graph shows U.S. GDP from 1929 to 2013 in real 2009 dollars (corrected for inflation) along with the years major environmental laws were passed. (Prepared by Peter Gleick, Pacific Institute. GDP data from the US Bureau of Economic Analysis.)

And for the record, here are some of those past claims (HT to the Cry Wolf Project and others) - proven wrong over and over.

Auto industry executives, in opposition to the 1990 Clean Air Act update also stated "[Further decreasing auto emissions] is not feasible or necessary and that congressional dictates to do so would be financially ruinous."

In 1975, the US Chamber of Commerce criticized the passage of environmental laws by Congress, including the Clean Air and Water acts, saying "But they went ahead anyway in the spirit of political expediency to ramrod through measures that would affect millions of people and billions of dollars..."

The CEO of Pennwalt, a major industrial producer of ozone-depleting CFC's, talked of "economic chaos" if CFC use was to be phased out.(1) DuPont, the largest CFC manufacturer, warned that "entire industries could fold" if ozone protection legislation was implemented.(2) Again, in January 1990, the DuPont Chemical Company testified to the House Committee on Energy and Commerce that accelerating the phase-out of ozone-depleting CFCs to July 1, 1996, would cause "severe economic and social disruption."

The Mobil Oil Company testified to the House Committee on Energy and Commerce in October 1990 opposing cleaner gasoline standards, saying "The technology to meet these standards [regarding requirements to use a new kind of cleaner gasoline] simply does not exist today...[and we predict] major supply disruptions."

The National Association of Manufacturers, in opposing regulations to cut acid rain in 1987, said "The effects [of rules to reduce acid rain] include serious long-term losses in domestic output and employment, heavy cost burdens on manufacturing industries, and a resultant gradual contraction of the entire industrial base. The irony of this bleak scenario is that these economic hardships are borne with no real assurance they would be balanced by a cleaner, healthier environment.

We have to address the serious threat of climate change -- let's get on with it and unleash America's ingenuity.