The African poaching crisis is at its worst levels ever, with an elephant killed every 15 minutes for its tusks, fuelled by an insatiable demand for ivory products.

Prominent New Zealand business leaders have teamed up with many of the most respected international conservation agencies and spokespeople - including Jane Goodall, WildAid, and the Environmental Investigation Agency - to formally urge the New Zealand Government to consider a complete ban on all ivory trading. An Open Letter (available for sharing via social media) was delivered to the New Zealand Government and Prime Minister John Key on the 17th of July.

The Foreign Affairs, Defence and Trade Select Committee is due to make a decision on 24 July regarding the ivory ban petition by Auckland teacher Virginia Woolf, supported by environmental policy analyst Fiona Gordon.

In support of the ivory ban in New Zealand, I met up with legendary conservationist and scientist Jane Goodall to discuss the elephant crisis.

The problem is that as long as there are loopholes for selling ivory legally, the illegal trade will continue. A total ban on the sale of ivory is the only way forward. Social media can amplify the message and put pressure on your government, and ultimately it is up to us to give a voice to the voiceless.

New Zealand's role in the trade of ivory makes the country complicit in this crisis, and the petition is calling on the government to strengthen laws and fix loopholes that are encouraging illicit trade. Elephants are continually put at risk by the prospect of a sanctioned sale of ivory, whether in conventional auction houses such as Webbs Auction House in Auckland, or via Internet trading sites such as Trademe.

As a follow up to the interview with Jane Goodall, I interviewed Helen Clark, Administrator of the United Nations Development Programme. Clark had recently returned from visiting African countries on the frontline of the poaching crisis. Voted by Forbes as one of the most powerful women in the world, Clark is on a mission to dismantle the illegal wildlife trade by tackling the root of the problem: rural poverty in African source countries. 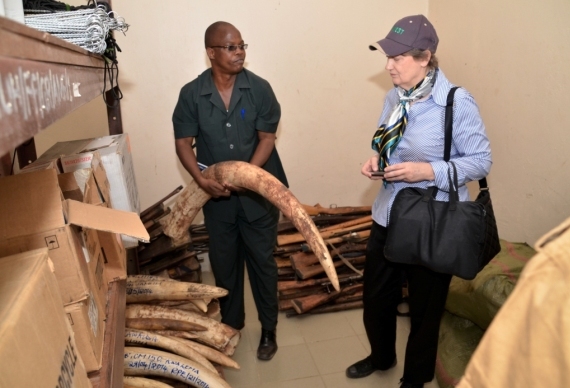 "This vile trade is a development, environmental, and security challenge," says Clark. "It is pushing endangered species toward extinction, fuelling corruption and conflict, and putting lives and livelihoods at risk."

UNDP has committed to help stop the illegal wildlife trade, contributing through their global presence and expertise in governance, the rule of law, poverty eradication, and environmental protection.

Helen Clark says New Zealand has a role to play in overcoming the poaching crisis and saving the elephants from extinction.

We can all do a great deal in our own way, whether by raising the issues as individual citizens through social media, lobbying our local legislators to raise the issue to a national level, or supporting the work of the UN and governments to tackle the problem. We can support the work of CITES, and support ivory demand reduction work. We can all do more, and we must, if we are going to save this iconic species.

All eyes will be on New Zealand this week while the Select Committee considers the petition to ban the ivory trade. On Friday I got in touch with Dr Kennedy Graham, MP spokesperson on trade, and one of the seven members of the committee weighing in on the decision.

I have heard experts argue that New Zealand laws on ivory trade and their policing enable some illegal trade to happen here. So there may be scope to tighten the laws to close any loopholes, or better resource the existing laws so that they are properly policed. The issue is not going to go away, nor should it.

Jamie Joseph is a writer and an environmental activist currently based in New Zealand. She will be returning to her African homeland in October to join the war on poaching. Follow the campaign to ban all ivory trade @ savingthewild.com - every voice counts.