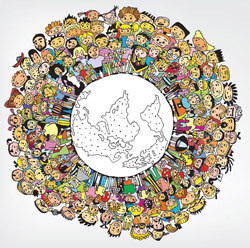 The United Nations recently released their 2015 World Population Prospects report, which estimates the vast numbers of humans that will inhabit our planet in the next 15 years. By mid-century, the estimated world population will be 9.7 billion souls; this is up one third from today's 7.3 billion hungry inhabitants. Where this growth will take place and how we prepare for this expansion is as critical an issue as our changing climate. How can organic agriculture play a part in this magnificent expansion of our species?

Reference the UN's Key Findings and you will clearly view our globe in a different light. No longer can you believe that our opulent world of supermarkets and farmers market cornucopias is the norm across the planet. The U.S. represents a small portion of the world's population and we will not be the source of the explosion of hungry comrades in the years to come.

It may be shocking to note that sixty percent of the global population currently lives in Asia (4.4 billion) and 16 percent in Africa (1.2 billion). Europe represents only 10 percent, Latin America and the Caribbean represent 9 percent and the remaining 5 percent are in Northern America (358 million) and Oceania (39 million) combined! China and India remain the two largest countries of the world, both with more than 1 billion people, representing 19 and 18 percent of the world's population, respectively.

It wasn't until 1804 that the world population reached one billion for the first time. It took another 123 years when in 1927 it reached two billion.

The world has added approximately one billion people in the span of the just the last twelve years.

The future portends even greater growth. In 2030, the world population is expected to reach 8.5 billion, in 2050, 9.7 billion and 11.2 billion in 2100. I am fairly certain that no matter how many organic veggies I eat, I won't be around to witness that last homo-sapiens crowd. But I care about deeply about how those people will eat.

The two pieces of information that are the most troubling to me are: The median age of the global population, that is, the age at which half the population is older and half is younger, is only 29.6 years of age, and Africa is expected to account for more than half of the world's population growth between 2015 and 2050.

There are large numbers of young people in Africa, who will reach adulthood in the coming years and start having children of their own, which will provide an even greater degree of challenges to our food supply. The concentration of population growth in the poorest countries will make it harder for governments to eradicate poverty and inequality, combat hunger and malnutrition.

The basis of most of our food comes from the soil. Yes, we have a few renegade processes which grow "food" like substances from genetically engineered algae and yeasts. But for now we are basically reliant on a few rudimentary things: healthy soil, clean water and a stable climate. Should we not be basing our future on fostering these three mediums of our future? What systems should we be investing in and teaching that contribute to the stability and health of these three components?

A recent new paper published in the journal Sustainable Agriculture Research examines results from six of the oldest grain crop-based experiments comparing organic and conventional farming methods. The long-term experiments were analyzed and showed an increase in soil health, productivity, water quality and economic benefits for farmers when they employed organic systems. "These results suggest that organic farming practices have the potential to reduce nitrate leaching, foster carbon sequestration, and allow farmers to remain competitive in the marketplace," the authors concluded.

Organic practices use extended crop rotations and organic soil amendments to optimize production. Each of these practices builds soil quality and fosters carbon sequestration and nitrogen cycling. Management of soil organic matter to enhance soil quality and supply nutrients is a key to successful all farming. The report shows that organic farming has important implications for global carbon and nitrogen usage, affecting water quality and carbon storage and sequestration. Could the answer to our hungry and growing population be in organic farming?

Modern industrial conventional agricultural practices rely heavily on fossil fuels and chemical inputs. Many of these such as GMO seed and feed, fertilizers and pesticides are expensive to purchase and maintain. Not only are they expensive, it has been shown that these methods ultimately contribute to soil degradation, water pollution and the loss of top soil.

Research published by the Center for a Livable Future, Johns Hopkins Bloomberg School of Public Health in Baltimore, Maryland, USA illustrates the concerns associated with industrial methods. The reports show that monocultures are eroding biodiversity among both plants and animals. Synthetic chemical pesticides and fertilizers are polluting soil, water, and air, harming both the environment and human health. Top soil is eroding much faster than it can be replenished--taking with it the land's fertility and nutrients that nourish both plants and those who eat them. Water is consumed at unsustainable levels.

These studies show a decisive path forward to feed our growing population. If we invest in more technical education and access to organic farming methods, we can produce more food with ecological benefits. We need not further degrade our environment at the expense of food and farming.

Organic farming is important to many of us in the U.S. but it is imperative to those in the developing world. The growing number of hungry humans need a sustainable way to grow food if we are to avoid social and environmental calamity. Organic agriculture is that path.