For months, six other scholars and I had pressed to speak with authorities of Oxford University Press about a shocking retreat by the Press -- the gold standard of academic publishing -- in upholding three basic academic standards. But not one of the two dozen Delegates (faculty ultimately responsible for the Press), would meet, even for tea, though we raise foundational questions about the integrity of Press’s policies: 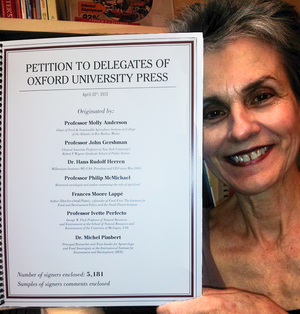 Two, the Press has said in writing that conflict-of-interest disclosure applies only to financial associations. (The effect of this policy? Its book Food Politics: What Everyone Needs to Know doesn’t disclose that the author Robert Paarlberg has been an official advisor to the CEO of the Monsanto Company, and in a letter to us the Press said that such nondisclosure is just fine.)

Three, the Press promotes as an overview what is an argument by a proponent of one side of a contentious public issue: For example, it promotes Food Politics as a “map” of “conflicting claims and accusations from advocates on all sides,” while the work presents one perspective by a widely recognized proponent.

So my response to Jonathan, an earnest young man, about what we hope to achieve, was simple: to reverse these indefensible policies. To that end, we’ll continue our petition and work to arrange a meeting with Vice-Chancellor Andrew D. Hamilton.

“But it’s you who have the power-- you students,” I told Jonathan. “My biggest hope is that you students pursue these questions.”

As we talked more, the obviousness of what I had just said hit me. So through the cold rain, shielding my head by with the plastic sheath that had held our 100-page petition, I hurried to the multi-story office of the Oxford University Student Union. I’d hoped to talk with its president Martha Mackenzie, but no luck. So I left her our press release ... and crossed my fingers. The Student Union, I was told, gets involved in critical campus issues like these.

And then there’s the Oxford Union -- the famous debating society. So as soon as I got back to London, I emailed its president Isabel Ernst. Maybe questions raised by our campaign could be a perfect debate topic, I more than hinted.

Now, if you know something of my work -- from 1971 Diet for a Small Planet to 2011 EcoMind -- and wonder why I’ve taken this on, it’s easy: Without evidence-based discourse democracy itself is not possible, and without democracy solutions to hunger and environmental collapse -- the focus of my life -- are out of reach. So it’s been immensely gratifying to feel similar passion coming through the comments of so many petition signers. I sense that many see Oxford University Press as I do: a public treasure they do not want to lose, especially as we experience the wider media becoming less and less trustworthy.

Ultimately, the question before Oxford University students right now is whether they will demand that their university’s press hold to the same standards that are required of them.

P.S. So please join in. Sign our petition and leave your comments. For more background, please visit www.scholarlystandardsatrisk.org. And if you want to know what happens next, just send us an email at info@smallplanet.org subject line “Scholarly standards.”