While the Supreme Court's decision in the DOMA case made it possible for ACLU attorneys to question the legality of anti-gay laws, there are still some within the gay community who wonder if their kind of love will ever be sanctioned.

What do a German man and two country boys have in common? The short answer: a polygamous marriage of sorts -- and more interestingly yet, they do not approve of gay marriage.

While some think of the idea of being in a relationship with more than one person as foreign, the self-proclaimed "threeo" are fine with their situation. In fact, they hope that one day America will be open enough not only to accept gay marriage but to accept folks who live and love the way that they do. 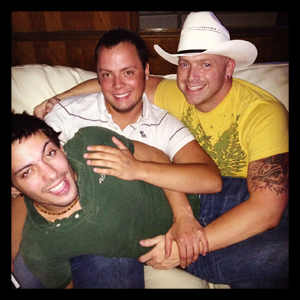 Kevin Coins, a slender, 22-year-old man with an animated face and semi-dark features, met Christopher Williams, 43, a shaved, blue-eyed, toned man who exudes confidence, and Jacob Bowers, 27, of Lexington N.C., a man with beautifully toned skin and a mysterious air about him. Williams and Bowers had already been together about seven years by the time Coins came jingling into their life.

Nestled with a gaggle of animals in a modest country house on several acres of land on the outskirts of Winston-Salem, N.C., an area most would consider rural, are three men who love and care for one another.

"We had been talking about it some and decided that having a third would complete our relationship," said Williams. Most people are lucky to make a relationship work with two partners. One can only imagine what it takes to make it work with three.

The term "polygamy" derives from the Greek "polugamos," for "often marrying." In layman's terms it usually means having more than one wife, but in the case of gay men, it means having more than one partner. Polygamy is a social practice that is not well tolerated in most countries and is usually against the law. These three men do their best to make the relationship work.

Christopher and Jacob's relationship was already cocooned on a rural farm surrounded by animals, not a usual place for the openly gay.

"We were living on my daddy's farm, where he lived his whole life," said Jacob. His mother passed away when he was 17 years old, and he felt an obligation to help his dad tend to the farm.

Jacob said that his father was pretty open about the couple and considers Christopher a member of the family, although for a while Jacob's father thought that the idea of adding a third to the couple's existing relationship was just a ploy to get rid of Jacob.

"We do not have a 'V' relationship," Christopher reminded me. "In fact, we have a closed relationship, which is rare but not rare, if you know what I mean."

The connecting member of a "V" relationship is sometimes referred to as a "hinge" or a "pivot," and the two other partners are indirectly connected and may be referred to as the "arms" of the "V." In the case of the three, they are closed and all equally in love with one another.

Making things more complicated, Christopher is a Pentecostal minister, ordained in Randleman, N.C. When he speaks about how the church dealt with his homosexuality, he simply says, "I didn't leave the church. The church left me."

He also has a 23-year-old son who lived with him most of his life. Christopher was helping him pay for college, but instead the son turned to spending his college money on illegal drugs.

"After a bit of time in rehab and some tough love, he eventually came around," said Christopher.

Not everything has been rainbows and butterflies. Chris recalled having a woman send him a message suggesting that by living their lifestyle, the three were "ruining gay marriage for everybody."

In fact, Christopher says that he does not support gay marriage because the marriage equality movement does not include polygamy, which some experts say is a longer shot than getting gay marriage between two partners approved.

Jacob confided that being in a polygamous relationship came with its own kinds of reservations, and that there was always some human fragility involved, as well as a lot of loving.

"There's a challenge when you enter someone in the mix," said Jacob, "especially when there are strong-willed people in the mix. Every day brings its own joys and challenges."

The youngest of the bunch, Kevin had experienced a few bad relationships of his own. He was cautious about moving in with the couple. When Christopher invited him to their farm, he was reluctant at first.

"At the time I had a boyfriend, things were going downhill," said Kevin. "I was living at the beach at the time, and I really liked it there. Moving again meant leaving the beach life and moving into a rural area."

You can almost hear the relief in Kevin's voice when he says, "Luckily this has been one of the most supporting relationships I have ever been in."

By "supporting," Kevin was referring to the choices that were made when Jacob and Christopher brought him into the fold. The "threeo" left the house in the deep country. Deciding that they wanted a fresh start so that Kevin would not feel that he was coming into a show already in progress, or a house that already had history, they all decided to start anew.

"We took it upon ourselves to make memories being in a house that is ours without negative connotations," said Christopher. "You have to make everything new. We weren't going to do that to Kevin. We never make a decision of ourselves. Now it forces us to talk about things that we didn't used to."

Jacob said that with a third person they may need a lot of discussions to come to an understanding, when before he and Christopher were at times complacent.

The bottom line in keeping their relationship together: trust. There must be absolute trust and remembering that they are all in it together.

Also, the three say that the sex is interesting, though they admit that it can be complicated.

"Instead of having to get one person in the mood, we have to have three people in the mood," said Jacob.

Even if it is a long shot, the "threeo" still hold onto the hope that someday America will have a place for them, and that their kind of love will be legal.