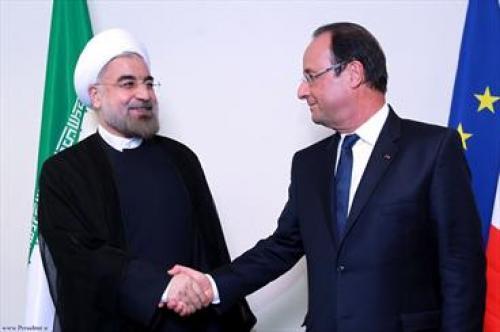 President Rouhani's visit to Europe this week is a reminder of how much has changed since last July. But Iran's eventual rehabilitation into the international community is by no means a done deal. Now that the nuclear deal has been struck and sanctions lifted, what is the next demand to be made of Iran? All sides appear to agree that it should be based around Iran's human rights record.

Of course, the ultimate aim of any genuine human rights activist must surely be for the UNCHR, Amnesty International and Human Rights Watch to one day be able to open offices in Tehran. Access for the UN Special Rapporteur Ahmad Shahid to visit Iran would be a good start. The way this might be achieved reveals a lot about the different approaches and real aims of those voicing concerns over Iran's human rights record.

But although when President Rouhani arrives in France he will be greeted by President Hollande and French businesses, he will also be jeered by protestors and demonstrators.

One group of protestors believe that improvements in human rights will only come about through engagement, dialogue and diplomacy. They demand that Rouhani brings Iran to conform with international standards and laws. The country needs to be opened up to greater scrutiny - a bit like the nuclear inspections regime. Activists like Shirin Ebadi further acknowledge that indigenous pressure groups can only flourish in an atmosphere of security, stability and economic prosperity.

Other protestors, like the Mojahedin Khalq, are simply ratcheting up a new phase of post-nuclear anti-Iran protest. Their demand is 'Don't let Rouhani into France'. They say that the only way to make Iran comply with the international community's demand for improved human rights is for Iran to be isolated and threatened with regime change. This aggressive stance, shared by neoconservatives, Israel and Saudi Arabia, is profoundly incompatible with human rights. Although recent events in Libya, Iraq and Syria should be a salutary lesson in how difficult it is to bomb regime change into country.

Iran's president was elected to office on a two-pronged platform of alleviating economic sanctions and improving human rights. He - his government - has achieved the first. Sanctions have been lifted, a sensitive prisoner exchange negotiated with the US and Chinese President Xi Jinping agreed a mega $600billion trade deal with the Islamic Republic. Next, Rohani will arrive in France with a shopping list: 114 Airbus jest.

It is not going to be possible to put this economic genie back in the bottle. Britain's newly appointed trade envoy, Lord Lamont has identified Iran as "the world's biggest emerging market since the collapse of the Soviet Union 25 years ago", and warns that "Britain is languishing behind rivals in its share of business."

So it is certainly right for the international community to hold President Rouhani to his promise to improve human rights in Iran. How this is done demands mutual acknowledgement of where Iran stands and what is possible.

Rohani has said that he will use the nuclear negotiations with world powers as a model for pursuing Iran's domestic policy goals. Certainly he will capitalise on Iran's success in Syria and Iraq to assert Iran's regional power on the international stage - Rohani is unequivocally part of the establishment, Iran's military are allies not rivals - but his preferred agenda is clearly to strengthen civic society and the rule of law.

Does this signal that Iran is prepared to meet genuine human rights advocates halfway? Dialogue and negotiation will widen Iran's engagement with the international community just as economic prosperity and stability will provide ground to strengthen indigenous pressure groups. Maybe this is a trade-off Iran is now in a position to accept. In contrast, those who advocate improving human rights through the barrel of a gun will surely become more and more isolated and their arguments more and more redundant.

Correction: This post attributed a quote -- "peace with Iran could greatly limit our ability to bomb it" -- to Senator John McCain that he did not say. The quote was mistakenly drawn from a work of satire.