Because we live in an age dominated by electronic wizardry and laser technology, new inventions bombard us so quickly that last year's breakthroughs are easily forgotten. As William Clay Ford noted:

"The further and faster the human race goes, the more difficult it becomes to remember its receding and ever-expanding past. To neglect that heritage is to risk a future in which young people find themselves without a means of building on the firm and reassuring foundation of the past."

Had it not been for the zeal with which Ford's grandfather, Henry Ford, collected traces of America's Industrial Revolution, there might be little left to remind us of our not too distant history. Their pattern of display at the Henry Ford Museum in Dearborn, Michigan is vastly different from that seen in most other science museums. In Dearborn, visitors can observe minute changes in technology and design. The evolution of dictating equipment proves fascinating when compared to the technology of today's electronic office.

An indicator of the breadth of Henry Ford's collection is to note that, during the first few years of the museum's life, nearly 80 percent of its visitors could recognize and identify most of the objects on display from their personal experience. At best, no more than 3 percent of today's visitors can readily identify the same objects.

Many people take their ability to think for granted. For some people, thinking seems to happen automatically. Others struggle to understand a concept (people like Sarah Palin and Christine O'Donnell are defiantly proud to demonstrate that ignorance is bliss).

A tiny percentage of the earth's population focuses its attention on topics like neural networks, the chemical or electrical functions of a synapse, or how to recreate a particular thought process. While overt displays of intelligence can scare some people away, real and/or artificial intelligence are constant sources of fascination. For a child learning to talk (or a stroke patient who is relearning how to walk), the way the brain functions remains a total mystery.

"The play begins in a factory that makes artificial people called 'robots.' Unlike the modern usage of the term, these creatures are closer to the modern idea of androids or even clones, as they can be mistaken for humans and can think for themselves. They seem happy to work for humans, although that changes and a hostile robot rebellion leads to the extinction of the human race. After finishing the manuscript, Capek realized that he had created a modern version of the Jewish Golem legend. He later took a different approach to the same theme in War With the Newts, in which non-humans become a servant class in human society." 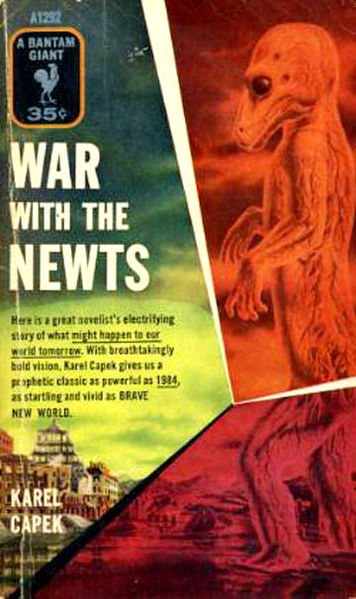 Book cover for War With The Newts

Ninety years later, man is getting closer to realizing Capek's vision. Written and directed by Jens Schanze, Plug and Pray examines the ongoing efforts of computer programmers to advance the science of artificial intelligence.

While the most apparent uses of robots are for military applications, performing routine chores, and helping to care for the elderly, man's vanity and arrogance have not diminished in the time since Capek's play had its world premiere. Nor has this famous scene from 1983's WarGames stopped scientists from trying to put critical, irreversible decisions in the hands of computers.

Although some of the inventors interviewed for Plug and Pray like to boast that they expect artificial intelligence will eventually allow robots to do anything a human being can do -- and even have the same rights as citizens -- this German documentary does not include evidence that any code has been written that would allow a robot to experience projectile vomiting, explosive diarrhea, hot flashes, or irregular menstrual cycles.

As is to be expected, this film (in which I could not spot a single female engineer) is very much an exercise in the study of "boys and their toys." Among the scientists interviewed for Plug and Pray who are wildly enthusiastic about the progress being made in artificial intelligence are: 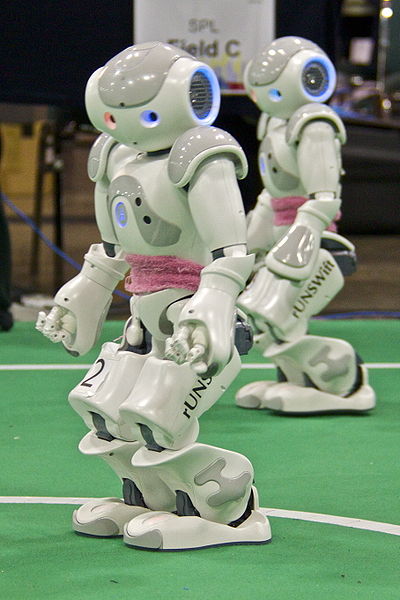 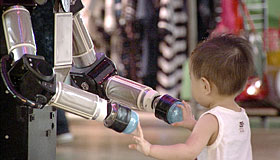 A toddler interacts with a robot at a Japanese shopping mall

One of the rare voices of dissent was former MIT professor Joseph Weizenbaum, who had long ago soured on idealistic visions of technological omnipotence (his 1975 book "Computer Power and Human Reason -- From Judgment to Calculation," contains a harsh critique of man's limitless faith in the redemptive powers of science). The creator of ELIZA (the world's first speech recognition program), he wonders what will it mean to be human in a world run by machines. Or a world in which machines have equal rights with humans. 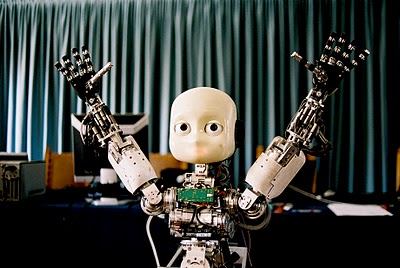 Although Weizenbaum died in 2008, in his last years he often took on the role of Cassandra with regard to the moral and ethical implications of the use of artificial intelligence. While younger people may think of him as an old fart, I wish he could have stuck around longer. This famous clip from Stanley Kubrick's 2001: A Space Odyssey demonstrates exactly what Weizenbaum feared the future might hold:

Several years ago, in response to one of my Transcription Trends columns in For The Record Magazine, I received an e-mail promoting a product that had been developed for use in data warehousing situations. Essentially, the software captured a dictator's speech through an enhanced approach to voice recognition. It would then extract key words from the report and parse the information in such a way as to make it valuable to market researchers and number crunchers.

When I raised a question about protecting patient confidentiality, I received a response from the company's president which was most unsettling. As you might have guessed, the author was a physician.

What follows is my response:

I don't doubt that you and your colleagues spent $10 million dollars on software. Or that it still has 'some ways to go.' However, the message you just sent me contains enough spelling errors (including my name) and grammatical mistakes to make it unacceptable as work that must be produced for a professional medical transcription service. We deal with many people -- including physicians -- who may be brilliant healthcare providers but are nevertheless functionally illiterate. Many -- even though they are board certified -- could not get hired for work as an office temp. That's the reality we deal with on a day-to-day basis. Your software may be fantastic. But if the people who are creating this program are writing and using the English language at the level of the message you just sent me, then I would worry about the quality assurance of the documents you intend to submit as patient documentation."

Will robotics strip the potential for creating art from artificial intelligence? Although the film has some genuinely creepy moments, Plug and Pray is definitely worth your attention. Here's the trailer: