Starting on March 31st, green luxury is about to get more accessible with the unveiling of the long-awaited Tesla Model 3. Could this be the one I've been waiting for my whole life?

My '98 Four Runner has been good to me, but the time is drawing nigh to trade her in for a younger model. I'm not fickle, just realistic. She's been looking a little haggard and continues to overindulge on fuel. I'd be lying if I said I wasn't feeling the 17-year itch, but I'm concerned that a nice ride still lies beyond my budget, especially since my preference would be something in a deep shade of green.

This car-buying conundrum leaves me wondering about the latest options for buyers interested in good-looking yet affordable eco-friendly vehicles.

A search on Edmunds brought up the usual triumvirate of hip green machines: the Toyota Prius, the Chevy Volt and the Nissan Leaf along with some fresh competitors. These options seem fun but still don't sweep me off my feet. Unfortunately, the lovelier eco-luxe models remain woefully out of reach. For example, the Tesla S, today's hottest green car, starts at a cool $71,200.

The prospect of Tesla ownership excites me, but I've made poor choices before (like leasing that used Audi convertible in my 20s). So this time I'm taking a more analytical approach to this decision by applying a widely respected framework: The Universal Hot-Crazy Matrix. This tool may not rise to the level of a universally-recognized best practice, but the masses that have shared the popular video sketch with their bros across America have found it useful for simplifying what is ultimately a complex decision. 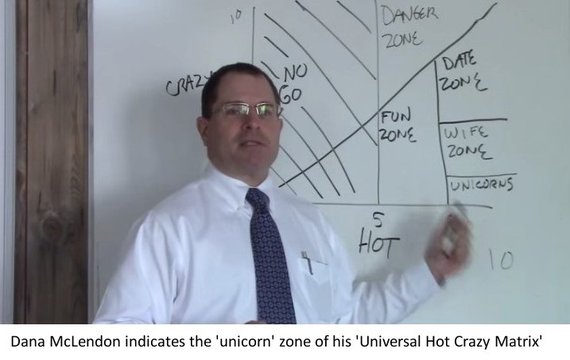 For the uninitiated, the Hot-Crazy Matrix proposes that a male of courting age should pursue the most attractive woman he can get (the highest "hot" number on the horizontal axis), while minimizing the "crazy" in targeted women. The lower-right part of the matrix (high-hot/low-crazy) represents the mythical "unicorns" - hypothetically conceivable but very hard to get.

In the spirit of interdisciplinary thought, I suggest using this model as a basis for evaluating the desirability-attainability of new green car ownership. So, I give you The Hot-CrazyXpensive Matrix, a visual aid for gauging green cars, i.e. electric vehicles and plug-in hybrids, plotted according to their sex appeal and affordability (because let's be honest, what factors matter more when buying a car?) 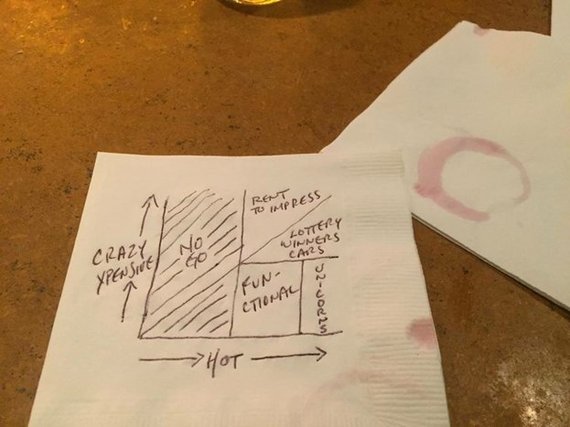 In my version, the Hot axis remains largely applicable in the search for a green car mate while the vertical axis becomes how expensive the car is. As with the original matrix, the objective is to maximize hotness while minimizing craziness. Staying on the smart side of the diagonal line is a good rule of thumb.

To illustrate, I had the boys in the lab populate a digital version of the Matrix with a few of the most recognizable options on the market. My version of the "Fun Zone" features FUNctional faves such as the Plug-in Prius and the Volt, a plug-in EV with a back-up gas tank for a total range of more than 420 miles on a single charge. This one in particular had my attention - that is, until the prospect of acquiring the elusive "ten" or at least a lovely nine presented itself. 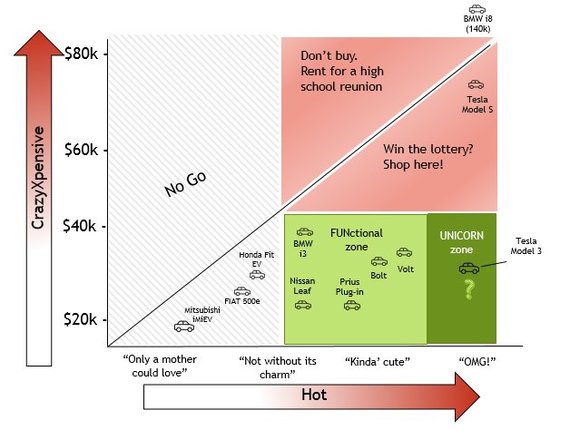 If its looks are anywhere near its older sibling, then Tesla's Model 3 might find itself at the impossible intersection between semi-affordable and way hot. We won't know until we see it, but the Model 3 has serious unicorn potential. What else would we expect CEO Elon Musk deliver?

When it comes to market penetration, size matters

I've been tracking the electric vehicle movement since 2008, when I entered the space on behalf of a client manufacturing electric vehicle charging infrastructure. From reporting from Plug-in 2010 in San Jose as the Leaf and Volt debuted and new standards were hammered out to writing on the proliferation of NRG's Freedom Stations, I've witnessed extraordinary milestones and success in an industry with its share of spectacular failures (who can forget Better Place's $1 billion loss?).

Market share of electric cars still hovers around 1% in the US (though an impressive 22% in Norway), but analysts predict price parity with the internal combustion engine by 2022, the point of liftoff for sales worldwide. When it comes to growing this evolving market, a lot of variables are involved. Management consulting goliath Accenture has identified seven success factors to enable electric vehicle growth. Among these, consumers' perception of electric vehicles will continue to play a major role in the evolution of the market.

Perhaps no single company deserves more credit for changing consumers' perception of EVs than Tesla, whose growth trajectory mirrors the mainstreaming of the electric vehicle movement. Since GM took the EV1 off the highways, Tesla's Roadster, whose base price in 2010 was US$109,000, was the first modern-age EV in serial production. Overall, Tesla sold about 2,450 Roadsters in over 30 countries. When Tesla introduced the Model S in 2012 to near-universal acclaim, the retail price was nearly $40,000 less.

The company has borne substantial costs along the road to adapting luxury EVs to the mass market. According to a Bloomberg article, in Tesla's first decade of existence, the company suffered through embarrassing delays and leadership overhauls, verged on bankruptcy at least once, and been a favorite target of short sellers. Finally in May 2013, Tesla posted its first profitable quarter.

By the end of 2015, Tesla delivered 50,580 cars and the company now has a target to sell 500,000 annually by 2020. Even forecasts of 40% less than that figure still represent huge growth for the company and a tremendous market driver for competition. After all, in 2015, there were only 400,000 EVs sold in the US by all companies (including Tesla) combined. Yet one company has the goal of doubling the market - not doubling their market share but the market.

Today, with a green ethos planted in the psyche of every carmaker, the market is growing exponentially. Additionally, with the issue of climate change now front and center on the world stage following the Paris Agreement, electrification is the ultimate cool factor for a hot rod. The inevitable result is a cadre of smarter-looking cars than what has ever been available to average buyers.

And maybe that's the problem. Americans appreciate braininess, but we buy sizzle. Thus far, green cars have been smart, but small - or a bit boxy like Chevy's new Bolt. Of course, not all buyers value style over substance, but the lack of practical features presents obstacles. Many drivers still perceive EVs as inadequate for long commutes. At the same time, while supermodels such as the Model S can take a girl all the way, these remain out of reach of the average Jane or Joe.

Trade-offs are a part of life but too often the green factor has been the feature to go out the window. Unfortunately, range anxiety and other concerns prevent widespread adoption of EVs and alternative-fuel vehicles, which are vital for making the kind of emissions reductions we need. So, there's a dual impact to the Hot-CrazyXpensive Matrix: the more affordable and sexy a given car is, the more likely it is to appeal to a mass audience, and therefore replace older gas-guzzling cars across the US.

The delivery of EVs to the mass market is bigger news than the success or failure of a single model; it's about how fast we can reduce our national emissions from ground transportation. Approximately 27% of US emissions are from the transportation sector, so affordable hotness isn't only good for the driver or the car company. It's good for everyone.

Tesla represents a chance to change the paradigm - a supermodel for the middle-class Jane or Joe consumer - but it depends on the operational success of a battery Gigafactory that isn't built yet and improvement on a delivery history that has disappointed buyers in the past.

In an age of impossible discoveries such as bacon-flavored health food and wine-workouts, can a sexy green car be delivered to the masses? In a field of hot cars from $60-150K, a model that starts at $35K seems like a good deal. If Tesla can lend its chiseled good looks, power and battery endurance to the Model 3 while delivering on the $35,000 price tag, they'll deliver the clean car Americans want with the sizzle that Americans crave.

With a sleek body that can go for miles - 200 on a single charge - at a price that more buyers can afford, the Tesla Model 3 might put Tesla in the unicorn business. And for would-be owners willing to dream, Tesla will begin taking deposits of $1,000 starting at retail stores on March 31 and online on April 1.

For my part, I'm holding back a bit, watching to see whose package wows me. I expect I'll jump on the right ride when the moment is right. It could be Tesla's Model 3 or it could be another eco-friendly hottie appearing on the horizon in the next year or so. It could even be one of the models from the FUNctional zone whose complex features have gotten under my skin in the time since that first test drive.

In any case, I'm open and in the market, boys. Let the race begin.