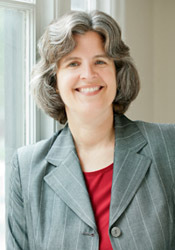 Michele Simon, JD, MPH is a leading voice when it comes to advocating for policies supporting public health. She is the president of Eat Drink Politics and the author of Appetite for Profit: How the Food Industry Undermines Our Health and How to Fight Back. With the updated Dietary Guidelines for Americans due out later this year, she's been working to ensure that the guidelines are based on science, not meat and sugar lobby pressure. She recently spoke with me about what the guidelines might ultimately say about meat consumption and what consumers can do to be part of the process.

Diana Rice: The Dietary Guidelines for Americans are revised every five years and influence national nutrition policy. This February, the Dietary Guidelines Advisory Committee (DGAC) released a report based on the latest research that will shape the final dietary guidelines. What does the DGAC's report say about meat consumption?

Michele Simon: In the past, the dietary guidelines have encouraged Americans to "choose lean meats," a confusing but politically correct phrase. For the first time, this report states that a healthy dietary pattern is "lower in red and processed meat," finding that there is "moderate to strong evidence" that higher intakes of red and processed meat are detrimental to health. The DGAC goes on to conclude that plant-based diets are not only health-promoting, but associated with a lower environmental impact than diets high in animal foods. This is the first time the committee has addressed the issue of sustainability.

DR: You've said you're not out to start a fight with the meat industry, you're simply defending science. Can you expand on your understanding of how reducing our overall meat intake is in the best interest of public health?

MS: The DGAC recommendations are based on a thorough review of current science. While the meat industry claims that consuming their products is health-promoting, that's simply not true. And it is not in the best interest of public health to distort the facts. The dietary guidelines have been unduly influenced by the meat lobby since their inception over 30 years ago; let's make 2015 the year the guidelines are based on science alone.

DR: What about the recent nutrition trend that "fat is back"? The Paleo diet is more popular than ever, and butter made an appearance on the cover of Time magazine. We also hear that the real source of the obesity epidemic is sugar, not fat. Is this perspective supported by research and leading expert recommendations?

MS: Why must we have a contest over which is worse, meat or sugar? The science says both are bad, and we need to decrease both, it's that simple. After stating that a healthy dietary pattern is lower in red and processed meat, the DGAC's report goes on to say that a healthy diet is also "low in sugar-sweetened foods and drinks and refined grains." And as for claims that the recent dip in red meat consumption has contributed to the obesity epidemic, this is just a distraction. In recent years, consumption of non-red meats, cheese and highly refined foods have significantly increased, contributing to the climbing obesity rates.

MS: We rarely have an opportunity to hear the voices of healthy food companies when it comes to shaping the dietary guidelines, so I've organized a coalition of plant-based food companies such as Tofurky, Daiya, Lightlife, and Field Roast to voice their collective support for the committee's conclusions. You can visit LessMeatMorePlants.com to learn more about the coalition and its position on what should be included in the final dietary guidelines.

DR: How do you see the recommendation to eat less red and processed meat connected to the Meatless Monday campaign?

You could say that the Dietary Guidelines Advisory Committee is essentially recommending the Meatless Monday approach. Contrary to meat lobby scare tactics that the DGA will turn everyone into vegetarians, the science is clear that even reducing your meat consumption will improve our health and that of the planet. It's truly a win-win! And by specifically encouraging plant-based options, the guidelines can help Americans with how to reduce their meat consumption in a healthful and delicious manner.

DR: The deadline for consumers to submit comments to the federal government about the DGAC's report is May 8th. How can consumers voice their support for keeping the DGAC's recommendation for Americans to consume diets lower red and processed meats?

This is a rare opportunity to tell the government what we think. Consumers can visit this link on Health.gov to submit their own comments, and I also have a few suggested talking points on my website, Eat Drink Politics. Less Meat More Plants also hosts many resources to help consumers shape their comments, as well as graphics to encourage others to do the same.