There is a little-known ritual that occurs in the election years when Democrats prevail: Big "Conservative" Media starts to pull progressive talk radio off the air. I documented this in my 2009 documentary film Broadcast Blues: After Democratic candidates made big gains in 2006, Clear Channel and other public airwaves radio licensees pulled several well-performing progressive talk radio stations off the air and replaced them with sports and other programming. It would be easier to understand if the new programs got big ratings bumps, but that didn't happen. The new shows' ratings are typically only half those of progressive talkers.

True to form, Clear Channel Communications, which owns about 850 radio stations nationwide, took the progressive voices off the public airwaves in Portland, Ore., just days after Democrats won big nationwide. When devoted listeners tuned in to Portland's 620 AM, they expected to hear Thom Hartmann, Mike Malloy and other progressives waxing exuberant in the wake of this year's election results and looking forward to new possibilities in the new session of Congress under a wildly popular reelected president. Instead, they heard fans exuberant over some football game or other. FoxSports620 now broadcasts over that 25,000-watt frequency on our public airwaves. Bye, bye, lefty talk. Hello, left-handed quarterbacks. It isn't like Portland needs another sports radio station; there are already two in that very same market. But the community does need to hear an alternative to the "conservative" talk that is broadcast on eight -- count them, eight -- separate frequencies on Portland's radio dials. But as of Nov. 9, as reported on The BRAD BLOG, Portland joined the ranks of the other 95 percent of the country that can hear many stations spewing right-wing propaganda, but not a single one broadcasting progressive points of view. A few days later we learned that the CBS-owned progressive station in Seattle -- also in one of the most progressive cities in the nation -- is scheduled to disappear, most likely on the first of the year. Its KPTK caller letters have already been changed to KFNQ (Fan Q) in preparation for the all-sports station it is scheduled to soon become, unless something changes.

Take a look at these maps from Broadcast Blues, graphically representing the number of right-wing vs. progressive radio stations as of 2009: 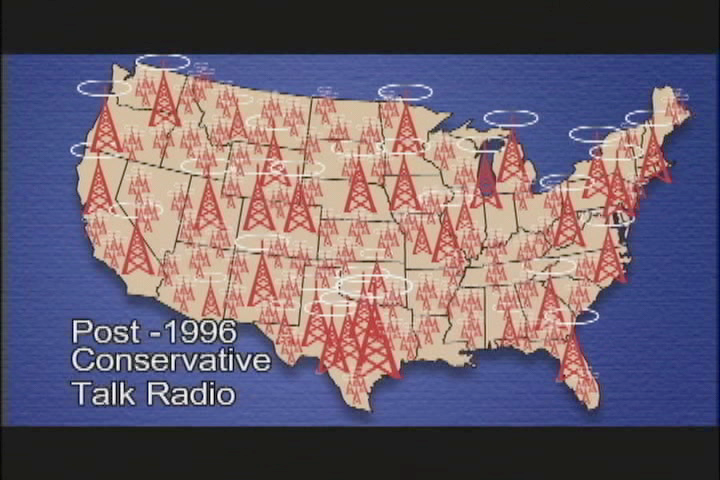 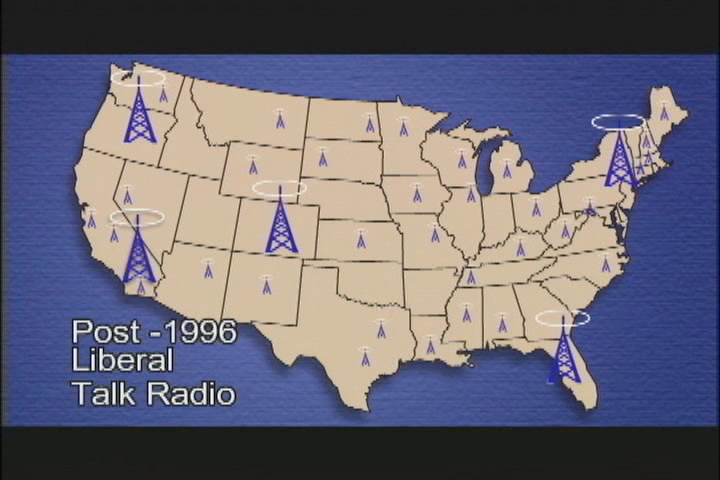 We show all large stations and smaller stations at a ratio of 7 to 1 (otherwise, the red antennas would have been one big red glob). See the Big Blue tower in Oregon? It's now been erased. The large towers in New York and Florida have disappeared, as well, along with many smaller stations. The one in Seattle? That'll be gone shortly, too, if plans move forward as have been indicated.

People in Portland are now organizing against Clear Channel to bring the progressive point of view back to the airwaves they own. This tactic sometimes works, as it did in Madison, Wis., and Columbus, Ohio, and sometimes it doesn't, as documented in Jon Monday and Jennifer Douglas' 2012 documentary Save KLSD, about the unsuccessful effort to keep San Diego's progressive Clear Channel station from flipping to all-sports. A Save KPOJ petition site has been set up, urging Clear Channel to flip the station back to progressive talk, and a Save KPOJ Facebook page has cropped up, as well. It already has more than 4,500 "likes." Its stated goal is to interest another licensee in the area in airing progressive talk.

So if it isn't about ratings, what other motive could the Bain Capital-owned Clear Channel have for denying access to progressive voices over the public airwaves, which we all own? The answer is found in Milwaukee, Wis., where five -- repeat: five -- local right-wing talkers on two stations directly supported Republican candidates from Scott Walker to Paul Ryan over our publicly owned airwaves 15 hours a day, five days a week. Republicans there boast that they win elections primarily due to the extraordinary promotion of these right-wing talk radio hosts, and pro-GOP business leaders are combing the state in search of yet more frequencies that they can find to air righty talk, because they know that that is what is winning elections. (Note: While Wisconsin went for Barack Obama and Tammy Baldwin nationally, the Wisconsin statehouse again went back into Republican control. Locally, the GOP rules, and so does their talk radio.)

But these are the public airwaves, not the Republican airwaves, so on Nov. 1 the Media Action Center (MAC) filed a legal challenge with the Federal Communications Commission (FCC) to deny WISN and WTMJ their licenses. During the Scott Walker recall, MAC proved that each station provided about 80 minutes of free airtime to supporters of Walker and the GOP but abjectly refused to allow any supporters of Walker's Democratic recall opponent Tom Barrett any access to the microphones whatsoever. Add it up, and the stations subsidized the Wisconsin GOP to the tune of $1 million.

We broke it all down at The BRAD BLOG shortly after the state's historic recall elections, including an explanation of how this violates federal law and longstanding FCC doctrine. What the two Wisconsin stations did not only breaks longstanding FCC rules but violates the First Amendment rights of the entire community. What WISN and WTMJ are doing amounts to "private censorship," a behavior that the United States Supreme Court has expressly ruled that broadcasters may not engage in.

The question now is whether the FCC will do its job as the law enforcement agency in this matter. MAC filed a formal complaint way back on May 24 about this same issue; Talkers magazine wrote that the decision could affect what talk radio could do during the 2012 election. But in typical FCC form the agency tasked with protecting the public-interest obligations of broadcasters (it's the only thing they must offer in exchange for the licenses that allow them to use of our public airwaves) has done nothing.

This time, however, the FCC must make a decision. Broadcast licenses come up for renewal only once every eight years, and the final date for the FCC to decide whether WISN and WTMJ should be able to continue broadcasting in clear violation of federal law is Dec. 3. So, FCC, we the people are depending on you to protect our interests. We are watching closely, and we will not go away quietly.

If you'd like to encourage the FCC to do its job in protecting the public-interest obligations of broadcasters over our public airwaves, here's how: Politely but firmly email Peter Doyle, the chief of the Audio Division of the FCC's Media Bureau, and tell him you believe that the FCC should pull the licenses from WTMJ and WISN in Wisconsin for using our publicly owned airwaves for one-sided political gain. Also, you can email Bobby Baker, who oversees political programming in the Policy Division of the FCC's Media Bureau. Tell him the FCC needs to stand up for the First Amendment rights of all of those in the community who are being privately censored by upholding the Zapple doctrine. (We wrote more on the Zapple doctrine here.) The FCC's primary job is protect the public's interest. They should start right now. Please join us in letting them know!

This piece originally appeared at BradBlog.com.