Today's New York Times includes a front-page story on a new poll headlined "Poll Suggests Opportunities for Both Parties". In the lede, Jeff Zeleny and Megan Thee-Brenan note the signs pointing to a Republican sweep, but note "while voters rate the performance of Democrats negatively, they view Republicans as even worse, providing a potential opening for Democrats":

Republicans are heading into the general election phase of the midterm campaign backed by two powerful currents: the highest proportion of voters in two decades say it is time for their own member of Congress to be replaced, and Americans are expressing widespread dissatisfaction with President Obama's leadership.

But the latest New York Times/CBS News poll also finds that while voters rate the performance of Democrats negatively, they view Republicans as even worse, providing a potential opening for Democrats to make a last-ditch case for keeping their hold on power.

Is this really true? Will the poor state of the GOP brand limit the party's gains in November? I made this argument months ago (see here, here, and here), but the Republican party's image hasn't prevented it from taking a substantial lead in the generic ballot.

To review the evidence about where the GOP brand stands relative to the opposition party in previous midterm elections, let me update my post from last October. Here's a bar chart of each party's net favorable ratings (% favorable - % unfavorable) for the most comparable available CBS poll from midterm elections between 1990 and 2010*: 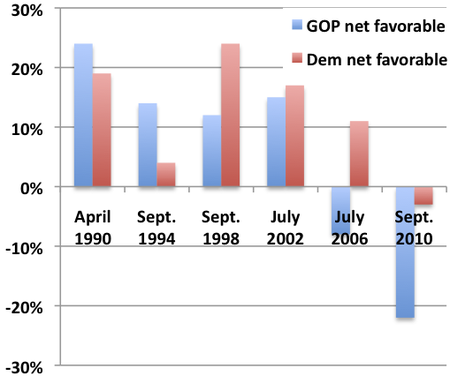 The GOP's net favorability ratings relative to Democrats are still worse than any opposition party in the previous five midterm elections (the closest comparison is 1998, when Republicans were seeking to remove Bill Clinton from office).

In the past, the opposition party's (dis)advantage in net favorability relative to the president's party has been relatively highly correlated (r=.71) with changes in the number of House seats in midterm elections. However, a simple linear fit shows a totally implausible result for 2010 (Republicans losing 17 seats): 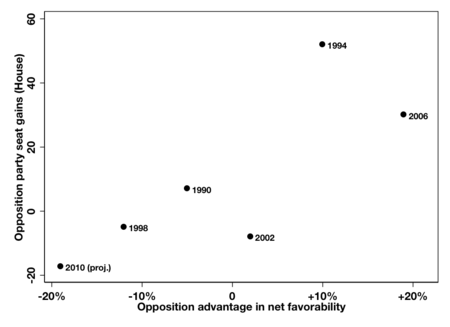 I'm not buying it. At this point, every other major factor (the high number of seats Democrats currently hold, the fact that it's a midterm election, and the generic ballot) points toward big GOP gains -- the predicted result of most House forecasting models. Unfortunately for Democrats, midterm elections are a referendum, not a choice.

Update 9/17 9:09 AM: Barry Pump points out that the net favorability advantage appears to be a better predictor in the last five midterms than the generic ballot. It's very hard to say what will happen. As he points out, this is uncharted territory:

Second, we've yet to be in a situation until now -- as far as we have data to show it -- where the favorability rankings of the two parties were so discordant with the generic ballot.

* I focus on net favorables rather than net approval of the parties in Congress (which Zeleny and Thee-Brenan cite) because the available data is more comprehensive and the measure is less confounded with feelings about Congress as an institution.

[Cross-posted to brendan-nyhan.com and Pollster.com]