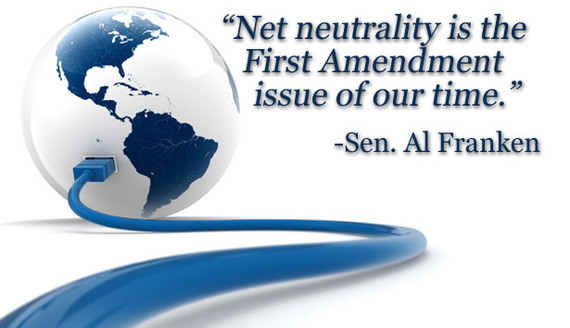 There's been considerable noise in the press over the past few days about a U.S. Court of Appeals ruling that declared that the Federal Communications Commission overreached in creating so-called Net Neutrality rules in 2010.

But what does that ruling mean to the average business? Maybe nothing. Unless you're in the video industry, chances are your host is a far more important matter than your ISP.

There's a more in-depth look at the ruling and its history here, but in a nutshell, under earlier rules, Internet Service Providers (ISPs) had a legal obligation to give equal priority to all Internet traffic.

So if you were, for example, Time-Warner Cable, you couldn't refuse to carry or slow the delivery of Netflix or YouTube - even though those services either competed with your own or put undue load on your infrastructure. Every ISP was obliged to provide the same level of service to all legal content.

The FCC claimed this prevented discrimination. The ISPs claimed it cut into their business freedoms and made them uncompetitive. Whatever the legal wrangling (and the FCC may still appeal the decision), the Court of Appeals came down on the side of the ISPs.

Most ISPs instantly said the decision would make no difference whatsoever to their service.
Nevertheless, several commentators have dusted off their "the end is nigh" placards, claiming the abolition of Net Neutrality could damage all businesses. They argue that if ISPs can slow traffic, charge for adequate delivery speeds or favor one kind of content over another, who knows which sites will suffer?

If your company streams video to homes across the nation, there's a chance this decision might affect you - but the truth is, if you were in that position it's unlikely any of this will have come as a surprise and you'll have contingency plans.

The rest of the business world has little to worry about - or rather has other concerns. If you're an architect or consultant, or if you sell dog beds or auto parts, it's unlikely that you'll notice any difference because whatever actions the ISPs take (if any) you're simply not using enough bandwidth for it to effect you. In fact, if your website is running slowly, it's more likely that it's a result of your choice of hosting - and that's something you can control.

The majority of business, at the outset, look for cheap, reliable hosting - and to begin with that's perfectly adequate. Find a host with excellent support (which is happening more often across social media sites like Google+ and Twitter, and it's likely it will be engaged with its customers, providing advice on topics from helping your site attract more visitors.

The problems arise when your business grows, but your hosting has been neglected. There's an assumption that, through some magical process, hosting grows to meet your demands without either intervention or additional cost.

Some businesses might never need to move from shared hosting, but if you get thousands of visitors a day or run a popular store, the fact that there are numerous other sites on the same servers is bound to slow things.

The answer, in most cases is to transition to a dedicated server. Yes, it requires greater investment, but by the time you need it your business will have grown to the size where making the switch is not just affordable, but a practical necessity. You can choose to administer it yourself or opt for a managed server and save on staff overhead.

A question of control

The end of Net Neutrality (should it eventually arrive) is, in reality, more of a political battleground than a business one. Not only is it almost certainly beyond your control, it's of negligible real-world relevance for most businesses.

What you can control is making sure you've made adequate provision for a server infrastructure that matches your business growth and that your potential customer always enjoys the best experience possible when visiting your site.