When Donald Trump secured the election on November 8th, some US business owners breathed a sigh of relief, believing the December 1st deadline for implementing the new overtime threshold mandated by the Department of Labor had just been postponed -- if not abolished entirely.

In a previous statement, Trump told Politico that he would "love to see a delay or a carve-out of sorts" for small business owners when it came to the new Fair Labor Standards Act overtime regulations.

However, while Trump is on record stating that he plans to appoint a Secretary of Labor who will work to dismantle many employment initiatives that took effect during Barack Obama's presidency, business owners shouldn't be so quick to breathe easy. 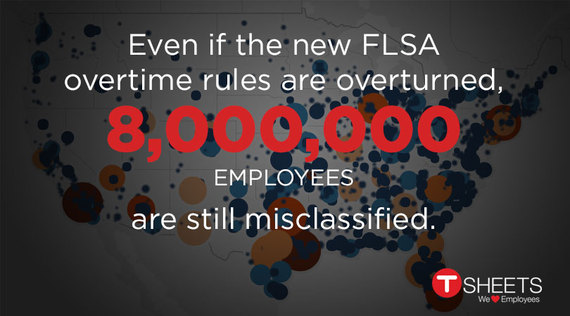 At risk of stating the obvious, Trump doesn't officially become president until January 20, 2017 -- and the new overtime rule goes into effect nearly two months prior, on December 1, 2016.

But more importantly, reversing the rule isn't currently on Trump's list of top priorities. On November 9th, NPR released an article detailing Trump's plans for his first 100 days in office -- and while "protecting American workers" is a big part of that plan, Trump mentions nothing about the DOL or FLSA -- or the new overtime rule.

Employment law experts seem to agree that it's unlikely the deadline will be postponed. "There are very few legal remedies that can stop the implementation in three weeks time," says employment attorney Maria O. Hart. "The election may have altered the political landscape of the country, but it has not altered the legal processes in a court of law -- and those take time. Businesses should still be prepared to comply with the new rule come December 1."

Of course, that's not to say that it can't happen. Jose Klein of Fisher Phillips says, "Presidents have been making rules about overtime since the FLSA passed." However, he cautions, "It would have to go through the rulemaking process -- which would take several months at minimum, and potentially years to go through." During which time business owners will still be required to comply... or face the costly consequences of an FLSA lawsuit.

The main takeaway for business owners? "Until there's a different rule in place," says Klein, "business owners have an obligation to comply."

And if you're still holding out for a rule reversal, seriously consider this: "The penalties for failing to pay overtime or any other kind of failure to comply with the FLSA are incredibly onerous and hazardous for employers," says Klein. "I would strongly advise business owners not to wait to make changes when it comes to compliance or bank on the rule being reversed. Employers should expect it to go into place, and plan for it to go into place."

In any case, regardless of whether the overtime threshold is raised permanently, the principles that cause FLSA violations remain the same. Business owners have paid out $1.5 billion for wage and hour lawsuits prosecuted by the DOL since 1995. And a record 8,781 lawsuits have been filed this year alone.

It's important to keep in mind that current misclassifications were the genesis of the new overtime regulations. In the eyes of the the DOL, an estimated 8 million employees are considered misclassified today -- employees who can (and likely will) file a wage and hour claim against their employers who fail to comply with the FLSA, regardless of new regulations.

Here are the critical actions business owners should take not in effort to avoid a wage and hour lawsuit:

For business owners who are concerned about rolling out big changes now that might prove overkill later if the new FLSA rules are overturned, the answer lies somewhere between sweeping changes and inaction. Consult with your legal counsel and HR resources to determine the minimum viable action your company should make to comply with the new regulations -- and the old regulations, which aren't going away anytime soon. Consider taking conservative measures to comply, and examine your company for weaknesses that are likely to trigger a lawsuit under the old and new regulations.

In short, leave the bets to fantasy football. Don't put your business at risk for an 11th hour hail Mary by waiting until the December 1 deadline has come and gone to make changes. Regardless of the future of the new overtime rule, and regardless of whether Trump ultimately trumps the overtime ruling, business owners should maintain and renew a focus on FLSA compliance -- or risk a costly lawsuit in 2017 and beyond.