There is a Miss America contestant this year whose platform is "Empowering Women: Overcoming Stereotypes and Breaking Barriers." 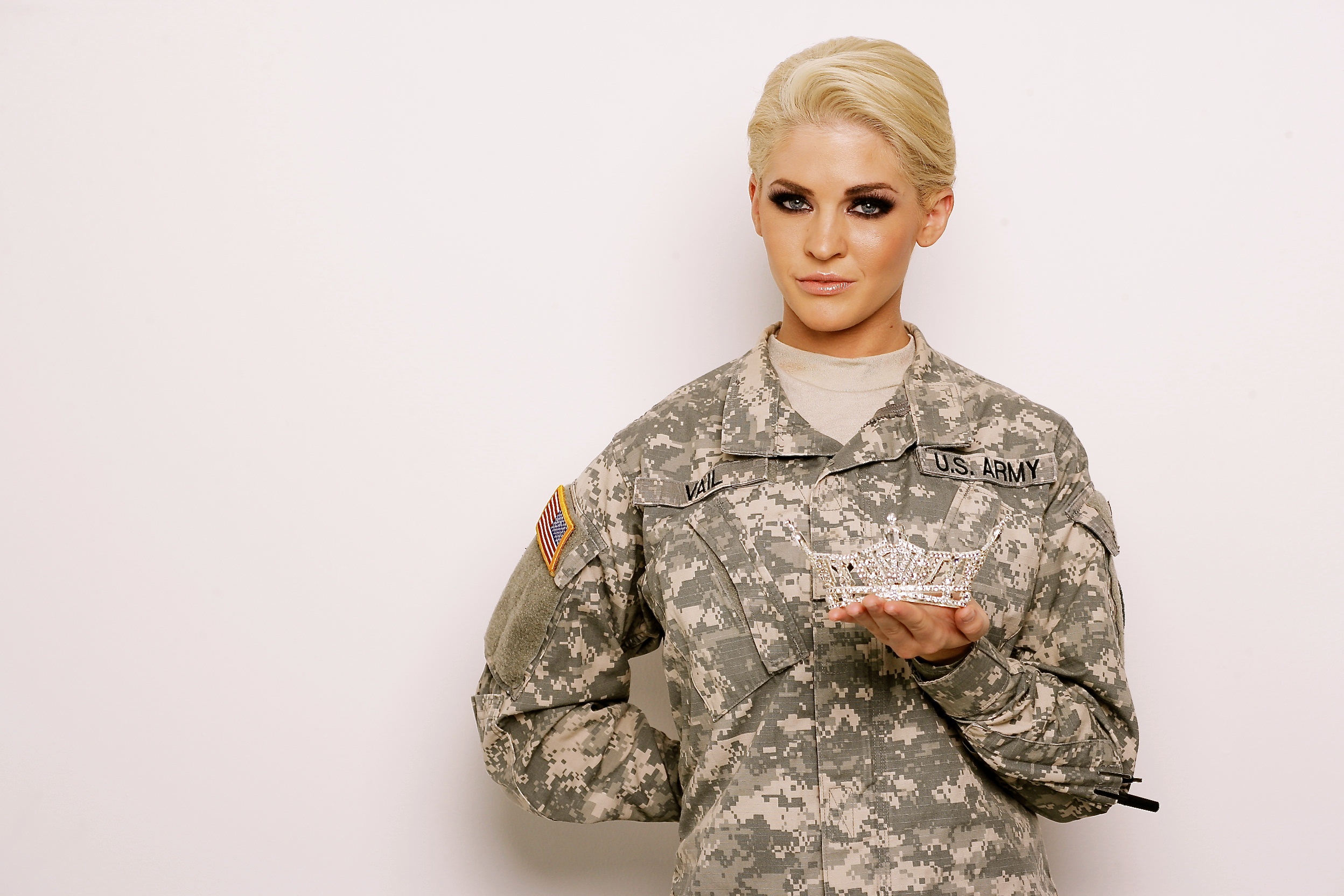 Her name is Theresa Marie Vail, Miss Kansas, and she'll be breaking a few barriers herself.
Theresa is in the military. She enlisted in the Army National Guard, raised her right hand and took the oath to "support and defend" just three weeks after her 17th birthday. She completed basic training the summer between her junior and senior years of high school, and AIT (Advanced Individual Training) as a mechanic between high school and college. She was the only woman in her class, and graduated #1. After three years she transferred to a medical detachment and went to dental tech school where she also graduated at the top of her class.

She's not the first contestant to be in the military. There's been one: Miss Utah 2007, Jill Stephens, a medic in the Utah National Guard. They have similarities: commitment to service, dedication to country, and almost no experience as a contestant.

"I never thought about it until a mentor, in my unit, explained how the recognition could help with what I want to do as a role model," Theresa explained in a recent interview.

As a child she was teased and bullied, and was shy and insecure as a result. But she overcame obstacles, relied on her religious faith, and worked very hard to become the leader she is today.

Theresa is a young woman who excels. Now 22, she's a Kansas State University senior with a double major in Chemistry and Chinese (with a 3.8 GPA in Chinese) - the first because she wants to be a dentist and the second because it's a challenge. Theresa loves a challenge. Tell her she can't do something and then stand back and watch her go.

She's an expert marksman on the M 16. She's an expert bow hunter. She skydives. She boxes. She's working on a private pilot license. She started motorcycle racing but stopped after a crash in which she broke all the fingers her right hand (hard to be a good dentist without flexible fingers.)

With pageant festivities back this year in Atlantic City (where Miss America began in 1921), the "Show Us Your Shoes Parade" will return to the famed boardwalk. The September 14th parade will be televised live for the first time ever (and will be lead-in to the pageant itself on the 15th). This is where contestants flash extravagantly decorated, often state-themed, girly-girly high heels to laughing crowds yelling "Show us your shoes."

Only Theresa will be in uniform, wearing combat boots instead of four-inch heels.

When it comes to the bathing suit competition, Theresa will be breaking another barrier: she'll be the first contestant ever with visible tattoos. No itty-bitty rose hidden under a bikini top for this girl. She has the insignia for the U.S. Army Dental Corps on her left shoulder. The Serenity Prayer ("God, grant me the Serenity to accept the things I cannot change, Courage to change the things I can, and Wisdom to know the difference") flows down her right side.

Of course, Theresa is also - if one can use this description for someone trained to shoot to kill - drop-dead gorgeous.

When asked about what she is most proud of, she grinned.

"I just got promoted. I made sergeant," she said. "And I re-enlisted for six years."

So, if things get wild in Atlantic City in a few weeks, this would be another Miss America first: Here she comes, Miss America ... Miss Kansas... Sgt. Theresa Marie Vail.

George Santos Tried To Roast Comedians, And It Went About As Well As You’d Expect