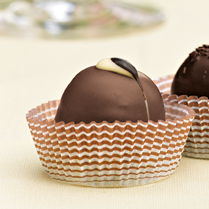 In America we use the word truffle as a catch-all for a dizzying variety of chocolate pieces. Something of a chameleon, the truffle can appear in every imaginable shape and size -- from spherical to square, and even dome-shaped -- as well as an inviting palette of colors. Depending on ingredients, truffles can be simple and understated or bold and exotic. They can be made assembly-line fashion in a large-scale facility, or given the white-glove treatment at every step of their handcrafted, small-batch journey.

It's enough to make you wonder: "Will the real chocolate truffle please stand up?"

In the interest of all things chocolate (always interesting to me!), let's travel back to the 19th century and see if we can unearth the truth about how truffles got their name, shape, taste, and mystique.

A Star is Born

The story begins in a picturesque, mountain-studded region of southeastern France known as the Savoie. It was there in the city of Chambéry, in 1895, that a
Advertisement
pâtissier
named Louis Dufour first invented the chocolate truffle.

Like most great inventions, the idea was deceptively simple, and the result was a revelation. Louis Dufour's light-bulb moment occurred when he combined chocolate and cream in a specific ratio, and created what we now call ganache -- the traditional center of a truffle. He then rolled small amounts of this ganache into balls and, for the pièce de résistance, coated them in a dusting of cocoa powder.

A Fungus Among Us

Advertisement
Truffles share their name with a small and pricey mushroom -- one that requires the use of specially trained pigs to sniff and root out. This can be confusing for people, but it's simply a matter of resemblance. When Louis Dufour made his first batch, those irregular, earthy-brown chocolate pieces looked a lot like the fancy subterranean mushrooms. So, the name
truffle
was used to describe them, and it stuck.

In 1902, Antoine Dufour (his exact relation to Louis is still a mystery) took the family recipe and crossed the water to London, to open what is now one of the city's oldest chocolate shops, Prestat. From there, the truffle spread to chocolate shops in other English cities, before continuing on its inevitable conquest of the world, one taste bud at a time.

Because of the high cost of imported cocoa beans, truffles were reserved at first for only the wealthy. In time chocolate became less expensive, making truffles a more accessible luxury. Production, consumption, and sales grew accordingly.

The Truffle Has Two Faces

There's no set standard or regulation for what defines a truffle. Within reason, if a confectioner creates something and calls it a truffle -- then it's a truffle. That being said, they generally fall into one of two categories:

1. Strictly Traditionalist. A confection much like the originals created in France, these delectable morsels are simply balls of ganache made from high-quality chocolate and cream, then rolled in fine cocoa powder. They are not typically coated in chocolate (or couverture, as it's known in the industry), which makes their shelf life very short -- two weeks at most. They're made fresh, and are meant to be consumed fresh. And the beauty of their super-short ingredient list, handcrafted provenance, and über-freshness? It's in all that pure, unadulterated chocolate flavor that comes shining through loud and clear with every bite.

2. Free to Be You and Me. In America and around the world, the term truffle has grown to encompass all different shapes and sizes of ganache covered in chocolate, or rolled in ingredients such as confectioners' sugar and nuts. It takes all kinds -- from delicate square-shaped pieces to larger dome-shaped delicacies and hand-rolled balls. Some are flavored with traditional raspberry or hazelnut, while others are combined with modern ingredients like green tea or cayenne pepper. Really, the sky is the limit with truffles, as long as they're made with ganache.

Which helps clarify exactly what a truffle is not. Since the minimum requirement is that a truffle be made with ganache, it stands to reason that anything not made with ganache cannot be considered a truffle. Pieces like fruit creams, caramels, whipped centers, cordials, nut-based pralines, or jellies don't fit into the truffle category, delicious as they may be.

Go Forth and Taste

When it comes down to it, the great thing about having so much choice in the shape, flavor, and style of your
chocolate truffles
is a guarantee that there's one for every taste. And all you have to do to find yours is to start sampling.
Nice work, if you can get it!

Related Links from the Menuism Chocolate Blog:
• The Super-Fresh Guide to Storing Chocolate
• Chocolate and Terroir: Discovering a Taste of Place
• When Chocolate Meets Technology
• The Politics of Chocolate

Will the Real Chocolate Truffle Please Stand Up? originally published on the Menuism Chocolate Blog.

Lauren Deitsch is the Research & Development Specialist / Chocolatier at Lake Champlain Chocolates in Burlington, VT, where she works to develop new chocolate recipes every day. She's a graduate of the Culinary Institute of America in Hyde Park, NY. In addition to a love for all things chocolate, she enjoys connecting with friends, reading, traveling, hiking, running, and cooking.