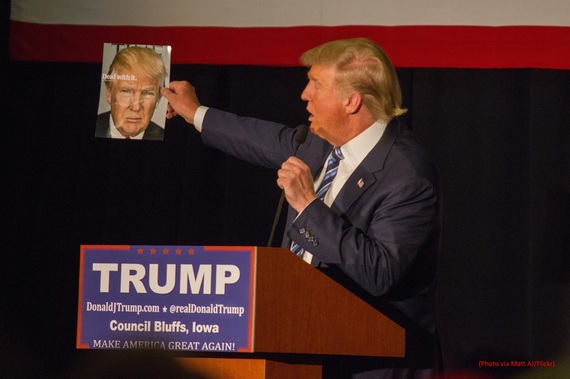 Is it possible that no one knows the real Donald Trump? Does he really believe all his bigoted, racist and xenophobic outbursts; all his absurdly improbable and impractical threats and promises; his outrageous quotes; his patently false claims; all his erratic, inconsistent and sometimes contradictory behavior? Or does he just throw them all out there because a lot of them seem to stick?

Even his most ardent detractors, political rivals and supporters hesitate to call Trump what his words suggest. Hillary Clinton, for example, has known Trump on a personal and professional level for many years. When asked if Trump was a racist, she responded. "Well, I don't know what's in his heart." She gave much the same answer during a debate with Bernie Sanders several months ago, when she said that American people could draw their own conclusions.

Speaker Paul Ryan, having only recently endorsed Trump, called his remarks about a Latino judge "the textbook definition of a racist comment," but stopped short of saying Trump himself was a racist.

The fact is, few people can believe that Trump is everything his behavior and comments seem to suggest he is. It's easier to believe that his comments are part of a "destructive campaign strategy," as West Hollywood Mayor Lindsey Horvath described it, or he's running a campaign based on the "random behavior model," as former House speaker Newt Gingrich called it. Again, the suggestion is that Trump chooses to act and run his campaign the way he does - not that he is the kind of man his words suggest he is.

To his enthusiastic supporters, of course, there's nothing wrong with this picture. Trump is speaking the truth; he's saying what other politicians believe in secret but are too hypocritical or scared to say out loud. He's not "random" or self-destructive. He's fearless and visionary.

Maybe years from now, when the dust has settled and we are emotionally removed from the question of "what's in his heart," we may come to know the truth. Friends, family and insiders might finally reveal what went on behind close doors with the Donald Trump we see before us today.

Or maybe soon he'll just break out into a smile and say: "I was just kidding, folks!" Either way, it has certainly been a wild ride for American politics during the past year of the presidential campaign.