OK, I know we live in an age of language inflation where never-use-one-word-when-you-can-use-four is the golden rule, where simple terms are preempted by complex circumlocutions, where stewardesses became air hostesses, and air hostesses have become 'your on-board in-flight cabin service supervisor.' But 'adventure specialist?'

Yes, tour guide is now infra dig, out, consigned to the dustbin of derogatory designations, and he/she has shape-shifted into 'adventure specialist.' That's what we now have on the bus taking us from Seward to Denali National Park on the land portion of our early-season mid-May Alaska cruise/land trip. 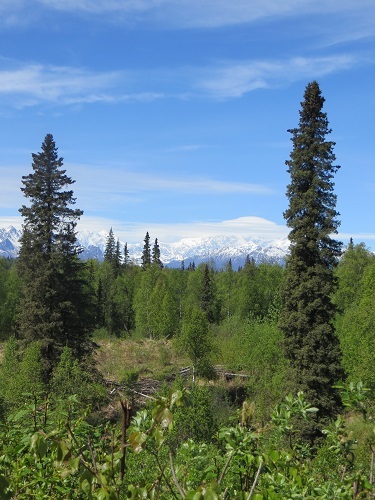 But not to worry - we ignore him and much of his non-stop commentary. The weather is still superb, another day of brilliant sunshine and virtually cloudless skies that locals say is an almost unheard-of bonanza in Alaska.

The mirror reflections of snow peaks and spruce forests glisten back upwards from stilled lakes, waterfalls plunge down precipices, and icy tongues course down the mountains in rugged creases, crumpled folds and deep gorges. 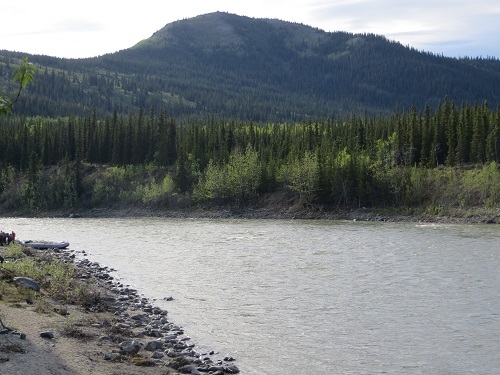 We stop off in Anchorage for a bite - $6.50 for a hot dog from a pavement stand, $8 for a reindeer sausage. We pass through Wasilla, where Sarah Palin launched her political life as Mayor Nuttiness. 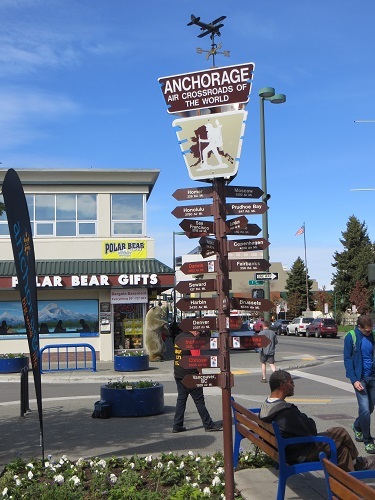 It's a collection of low strip malls and wooden houses on a placid lake, which prides itself as the starting point of the Iditarod dog mushing race - except that lessening snow forced the race to start further north - first at Willow, and this year in Fairbanks.

Willow was slated to replace isolated and road-deprived Juneau as state capital since it's closer to Anchorage, the state's largest city with 300,000 residents, some 40 percent of Alaska's total population, but that project never got off the ground. 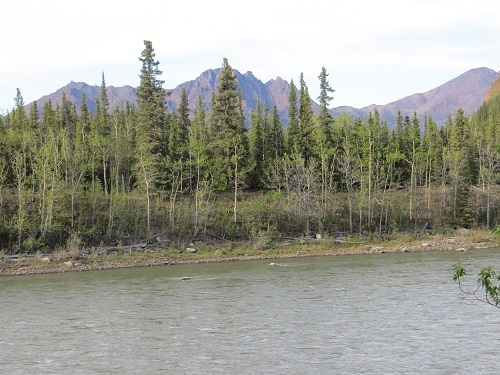 Next we pass close to Talkeetna, the town where, according to our 'adventure specialist,' the good burghers in 2000 despaired of the official candidates for mayor and instead voted in Stubbs, a cat, by write-in. The feline is still mayor, although others claim the whole story is a hoax.

What is not hoax, though, are the beautiful forests of dark spruce and deciduous trees, the latter all garbed in new-born green gilded by the glorious sun, shimmering beneath the snowy crags. 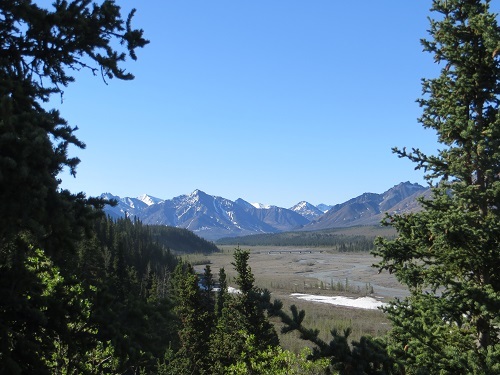 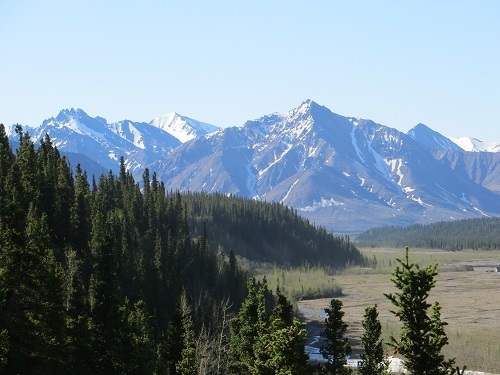 The tallest mountain in North America, Mt. McKinley soars up to 20,237 feet, with a sheer rise of some 18,000 feet from its base. Mt. Everest may be much taller at 29,029 feet but the base for its final rise is at 21,000 feet. What's more, in today's splendid weather, the mountain is uncharacteristically more than 70 percent clear with wisps of cloud around its summit. 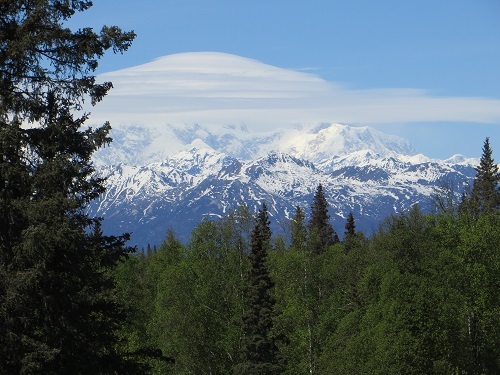 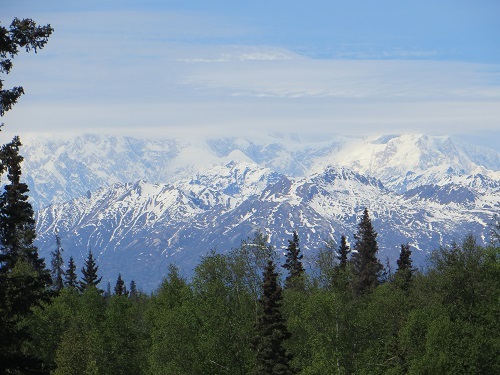 So from a lookout near Talkeetna, scores of miles from Denali, we have incredible shots of McKinley on the horizon, even more incredible, ridiculously grimacing selfies exploding all around - and Rivka's off in the gift shop looking at incredibly kitschy jewellery. 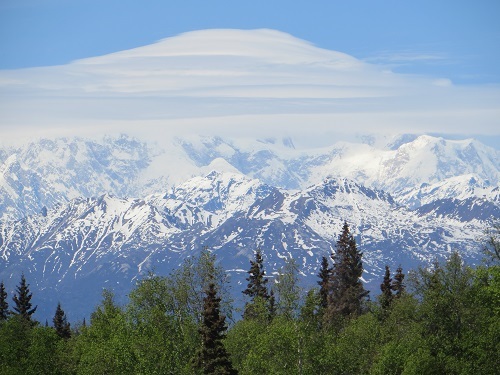 Even more incredibly, the arrogantly self-assured guide, sorry 'adventure specialist,' from another tour group says McKinley is to the left of that spruce tree over there, while we've been thinking it's the much larger white hulk to the right. All the selfies immediately stampede to regroup and pleasure themselves at the new ground zero. 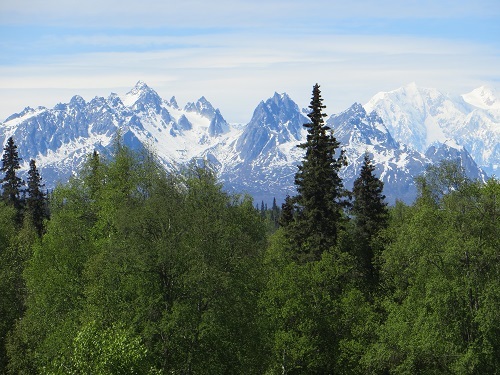 Our own 'adventure specialist' of course has gone AWOL, instead of being on hand to guide our ocular orbs. Oh that he would just remain a tour guide! When we corner him in the parking lot he contradicts the other 'adventure specialist.' So does our bus driver. So it's back to the viewing deck, and a new stampede of the selfie battalions to regroup again at the original pleasuring target. 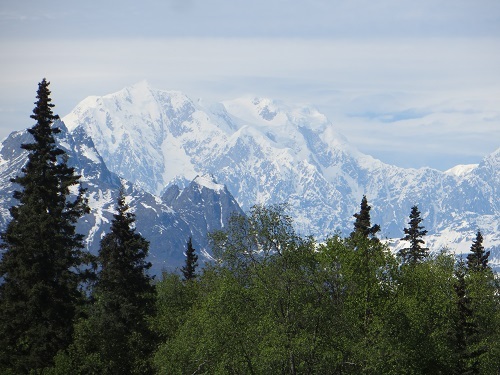 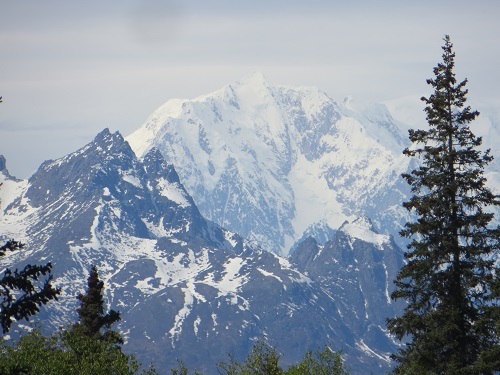 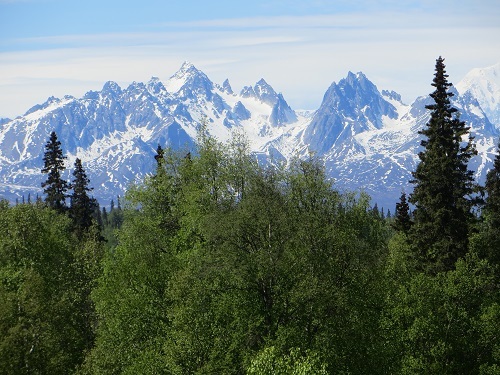 The teeth to the left

Having established the identity of the real McCoy McKinley, there's now the question of the name. The indigenous Athabaskans who have lived in the area for thousands of years call it Denali, the High One. But in 1896 a gold prospector called it McKinley in honour of yet-to-be-elected President William McKinley.

Alaska has now changed the name back to the original Denali, but to get official rebaptism by the U.S. Board on Geographic Names agreement by all 50 states is required. Ohio, McKinley's home state, is the lone hold-out, vetoing the effort ever since 1975. Talk about petty home town patriotism! 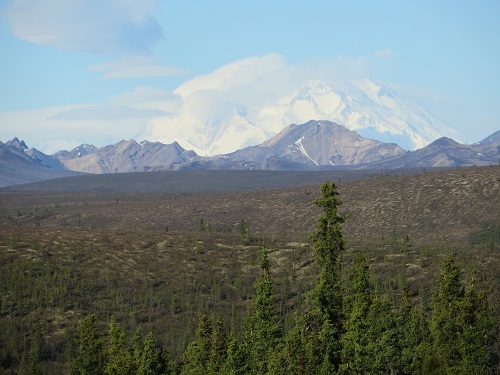 Denali National Park's excellent information center has a wide-angled photo of much of the range, identifying what the idiot 'adventure specialist' from the other group took as the Tall One as the much lower Denali Be'ot, the Tall One's Wife. Perhaps the misguided fool's a feminist. 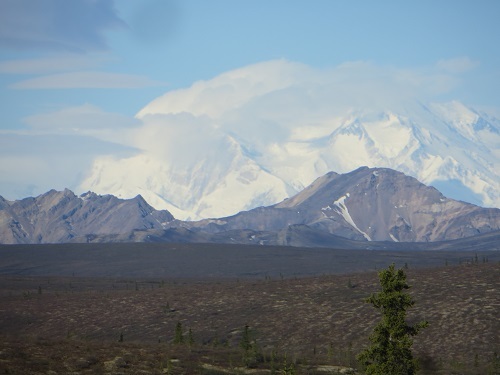 We also learn how the mountain was formed. Athabaskans hold that Raven, creator of the world, was pursued by waves. He turned smartly and unleashed his spear against a huge wave, turning it to rock, thus creating Mt. Denali. It may not be geologically correct, but still. 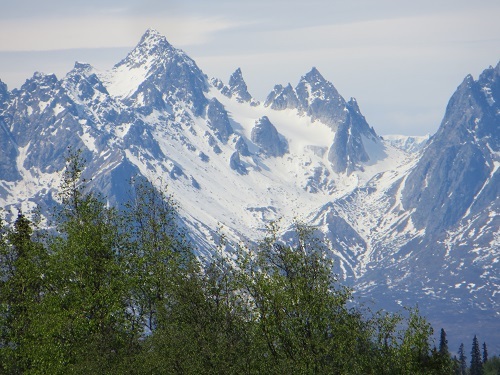 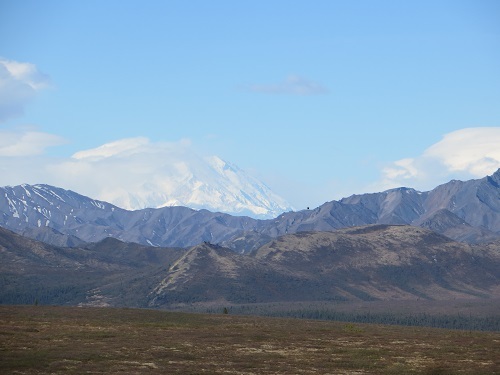