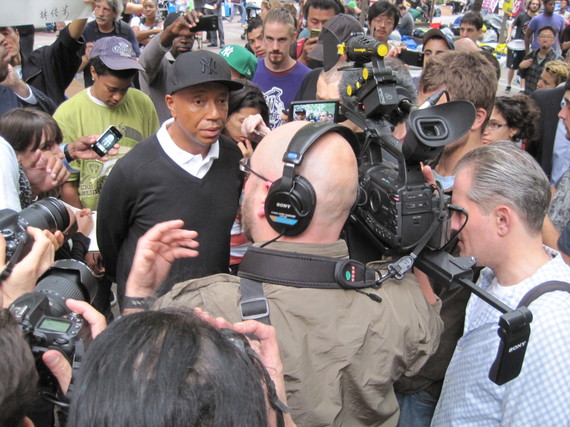 Five years ago on September 17, 2011, Occupy Wall Street's taking of Zuccotti Park in New York City provided an opportunity for many stars to shine. A few, all too few, continue to shine even today.

When Occupy was evicted from its Eden, some of the brightest faded quickly, having no audience. Gratefully, other stars emerged out of that darkness and continue putting forth their light even today.

As Michael Greenberg described in The New York Review in November, 2011,

Cameras were everywhere - recording, broadcasting, feeding - and the people at the computer hub were hard at work, streaming it all live. The movement was a digitized global brain, a strange melding of the virtual and the actual, one a mirror of the other, both unspooling simultaneously in real time.

How could this not attract the glitterati? Here is a sampling of those immediately tying themselves to the Occupy cause, but who seemed to fizzle, followed by a list of those who have continued to shine. The envelopes, please...

One good place to start our search would be to review a Blaze article at that time: "Top Ten Richest Celebrities Supporting Occupy Wall Street".

Grant you, the purpose of the article was to ridicule this group of 1 percenters (worth collectively $1.2 billion) for claiming to be interested in the needs of the 99%. One of them "sent her love" (Yoko), but memory is dim as to whether this group contributed more than that.

Fox News reported that Kanye West visited Zuccotti wearing a $355 Givenchy shirt topped with wearing gold grills and chains. The Fox conclusion, disputed by Russell Simmons (pictured above) who was a regular visitor to the park, was that "Some celebrities... are famous for flocking to a spotlight like a moth to a flame, and right now there is no bigger flame than Occupy Wall Street.

There are those who not only did not "flare out" after Occupy, but have continued to support and participate in many causes that followed. Foremost would be Mark Ruffalo who not only talked the talk of climate change in the park, but three years later walked the talk by appearing with Leonardo DiCaprio and Chris Rock at the Climate Summit 2014 to further that cause.

Two others of acclaim: Cornel West and Lee Camp are great megaphones for activist causes, and Occupy has been a favorite for both.

Finally, let's honor the spotlight provided by the Literati and scribes that discovered and kept Occupy in the news.

According to Goodreads.com list created in December, 2011, some 70+ books had been written by and for Occupiers and activists addressing society's inequities, ranging from the highly rated Debt: The First 500 Years by David Graeber and Griftopia: Bubble Machines, Vampire Squids, and the Long Con that is Breaking America (my favorite) by Matt Taibbi.

Today, Amazon lists 33 pages of books related to Occupy in some fashion, with the just-published Weapons of Math Destruction by OWS alternative banking activist Cathy O'Neil being the latest product.

And then, there are acknowledged giants. Occupy then, and now, is often the subject of the pen of Norm Chomsky and Chris Hedges. They have been unwavering in their support and would be most welcomed by Occupiers of all stripes on September 17. Chomsky at minimum for his book Occupy and ongoing commentaries and Hedges for Wages of Rebellion: The Moral Imperative of Revolt!

Forgive the sparse and incomplete nature of this lineup. I know that many people of worth and note are not being properly applauded, nor enough "summer patriots" pilloried. Include your own candidates in either category in any comment which you may care to leave here.

However, nothing takes away from the legitimacy of this question:

Will the Stars re-appear on Occupy's 5th Birthday this coming Saturday, September 17?