If there is one tax loophole that looks dead in the water, it's the law that lets hedge fund and private equity managers pay a 15-percent capital-gains rate on the multimillion-dollar fees they collect -- substantially less than the top income tax rates paid by their secretaries, chauffeurs, and the pilots of their private jets.

On the surface, the stars are aligned. There is a newly elected Democrat in the White House who is desperate to raise revenues. His budget calls for killing this tax break to raise $14.75 billion over five years and $23.89 billion over ten years. In addition, there are Democratic House and Senate majorities - representing the party of working people - and what could more unfair than letting billionaires pay taxes at a fraction of the rate of the guy with the lunch pail ?

But reformers seeking to raise the taxes of the super-rich should not assume this is a slam dunk. The Democratic majority in the Senate has looked at this provision before -- most recently two years ago. Many Senate Democrats saw the legislation as biting the hand that fed them and breathed a sigh of relief when, on December 6, 2007, Republicans mustered enough votes to filibuster the proposal to death.

Not only have hedge and private-equity fund managers earned massive amounts - in 2007, according to Institutional Investor's Alpha Magazine, John Paulson made $3.7 billion while George Soros and James Simons came in at just under $3 billion (to make the top 25 required $360 million) - even as their compensation does not require them to put their own money at risk.

You might expect these rich folks to be Republicans, but, it turns out, hedge and venture capital people like Democrats - so much that they have lavished millions of dollars to help them win re-election. As an expression of their love - and of their desire to influence tax policy - hedge and private equity fund managers and their PACs gave more cash to Democrats than Republicans in 2002 and 2004, even before the Democrats rose to power.

Take a look at the following charts from the Center for Responsive Politics.

For at least three Democratic members of the Senate Finance Committee - Charles Schumer of New York, John Kerry of Massachusetts, and Maria Cantwell of Washington - raising the taxes of hedge and private equity fund managers is a particularly discomfiting prospect: each represents a state with a relatively large number of such funds.

Over the past five years, the largest campaign contributors to Schumer have included hedge fund titans Citigroup Inc, $80,800; UBS AG, $79,750; Goldman Sachs, $58,040; and Morgan Stanley, $57,000, according to the Center for Responsive Politics.

Cantwell, in turn, has received a total of $543,556 from the Securities & Investment industry over the past five years.

When the hedge and private-equity fund industries faced a similar challenge to their capital gains tax break in 2007, most of them entered the ring expecting defeat, only to emerge victorious. In addition to campaign contributions, the individual companies and their trade associations sharply escalated their lobbying activities, pulling out the stops to beat back the tax reformers. 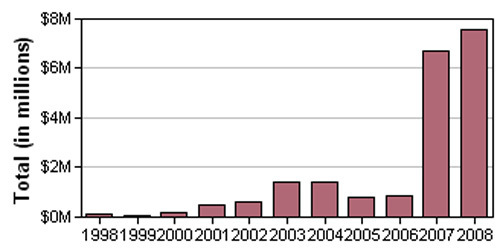 It is too early to tell how much lobbying and campaign contribution spending will escalate this year, since the first-quarter reports are not due in until after March 31. With the kind of money that is at stake for some of the players - for a fund manager making $1 billion, the shift from capital gains to ordinary income rates could mean a loss of nearly $200 million - the industry is not going to walk away from the field of battle without putting up a fight.

One of the factors working to the funds' advantage is that the Senate Finance Committee works in mysterious ways, unexpected decisions abruptly emerging from private deal-making that can radically transform the impact of tax legislation. Anyone assuming that the special treatment of hedge and private-equity fund managers will be scrapped by a populist Democratic majority should hold the champagne until Obama signs the bill into law.