Sig Sauer, Inc., the gun company in Portsmouth, New Hampshire, made a massive deal last year to sell $266 million worth of rifles and guns to the Mexican military and police - the same institutions implicated in serious crimes of executions of civilians and drug trafficking. With an openly anti-Mexican incoming U.S. president who's pledged to arm this country against Mexico, will the United States complete the deal to deliver thousands of military-grade firearms to Mexican police and army units?

The question becomes more acute in light of a new journalistic investigation that found that the Mexican army initiated and participated in the attack that disappeared 43 students from Ayotzinapa as part of a drug recovery operation. The investigation by Mexican journalist Anabel Hernández was published December 1 by Penguin Random House. Hernández cited officials who say that President Enrique Peña Nieto directly suppressed an internal report that discredited the subsequent investigation of the Ayotzinapa crime.

The September 2014 attack by Mexican army and police on Ayotzinapa students that resulted in the forced disappearance of 43 of them was carried out to retrieve a two-million-dollar shipment of heroin hidden in the luggage compartments of two buses in which the students were travelling, unbeknownst to the students, according to Hernandez's exhaustive journalistic investigation. An informant that Hernández said was "proven reliable" over the course of her 15-month investigation said that a drug capo called the Army about the missing heroin, but did not order the students' disappearance. Their disappearance, says Hernández, occurred after students saw soldiers unloading drugs from the baggage compartment, to eliminate witnesses.

Mexican federal officials then staged an elaborate version of what happened to the Ayotzinapa students. The official narrative held that police turned the students over to a local drug gang, who killed them, burned their bodies at a dump in the town of Cocula, and threw their ashes in the San Juan River, but that version has been widely discredited. A group of independent experts appointed by the Inter-American Human Rights Commission - known by its Spanish acronym GIEI - showed the story to be physically impossible. 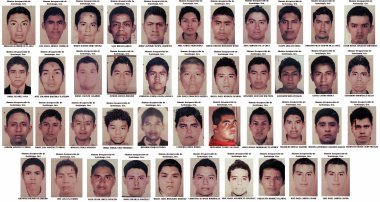 Police and navy officers tortured dozens of policemen and alleged gang members who confessed to the official version, according to both the GIEI and the book by Hernández, The True Night of Iguala (La Noche Verdadera de Iguala). The GIEI experts disclosed documents showing that 17 gang members detained for the Ayotzinapa disappearances were tortured while in custody, and cited another study that concluded that nearly 80% of the more than 100 detainees were tortured. Hernández adds to the record through interviews of detainees and family members about their treatment, including suffocation with plastic bags, electric shocks to genitals, and punches to the chest and stomach. The alleged torture led to signing confessions the detainees said had been written beforehand by authorities and presented to them.

The director of Mexico's federal Criminal Investigation Agency, Tomas Zerón, brought one of the tortured witnesses to the river a day before evidence of burnt bones of one of the students was supposedly found by Navy divers in the river, but Zerón never entered the prior visit to the river into the judicial record, a violation leading many to believe that the evidence was planted in the river. Family members of the 43 missing students demanded Zerón's dismissal, and in September he resigned - and was appointed as technical secretary of the National Security Council.

According to Hernández's account, President Enrique Peña Nieto directly suppressed a report by an internal affairs inspector that found the government's investigation invalid and recommended investigating army and federal police officials, as well as Zerón. The report, signed in September 2016 and parts of which were published last week, also identified 95 reports of torture of detainees in the case. When the inspector declined to alter his report, the president ordered him to resign, according to the book by Hernández, who was interviewed on CNN Spanish on November 28. The news weekly Proceso published a summary of the inspector's report, which ran more than a thousand pages.

Peña Nieto also promoted to the post of Army Inspector General, General Alejandro Saavedra Hernández, the commander of the region in charge of the Army's 27th Battalion in Iguala, which had command control of police and other government forces the night of the attack on the students, Proceso reported on December 1.

The State Department notified Congress last March of its approval of the Sig Sauer deal for $266 million worth of rifles and pistols destined for use by the Mexican army, navy, and federal and state police forces. In 2015, Sig Sauer delivered nearly 7,400 weapons to Mexico, including more than three thousand assault rifles, 505 machine guns, and 3,814 pistols, according to Mexico's declaration under the Arms Trade Treaty. These 2015 deliveries nevertheless represent only a small fraction of the massive arms deal.

Normally arms dealers have four years after State Department approval to complete an international sale, and with a sale this large, it is likely taking place over a period of time. That means that Congress and the State Department may still be able to stop further shipments of weapons to Mexican army and police forces.

Other weapons sales also have been approved recently, including: more than 11,000 Glock pistols worth $3 million for the Mexican military, approved in February 2016; more than a thousand Colt carbine rifles for Mexican state-level police forces, approved in April 2015; and grenade launchers and machines guns produced by U.S. Ordnance, Inc. approved for sale to the Mexican Navy in February 2016. In July, the Mexican Navy also got approval of a sale of more than two thousand rifle scopes produced by Trijicon, Inc. (Here is the full list of arms sales approved in 2015-2016, produced by the State Department Office of Regional Security and Arms Transfers.)

The Quaker organization American Friends Service Committee has just published a report, Where the Guns Go, on U.S. arms and their impacts in Mexico's context of corruption, human rights abuses and impunity. The report was based on government documents and firsthand testimony from human rights victims gathered in June, and concluded that arm sales "are a pivotal element of U.S. policy with regard to Mexico." The military approach to combating drug trafficking, the report said, "has led to a dramatic escalation of homicides in Mexico since 2007, making it the second-most deadly armed conflict in the world in 2015." They called on the United States to end arms sales and military assistance to Mexico and reorient drug policy to address addiction as a public health issue.

New information about the Mexican army's involvement in the drug trade and high-level cover-up of a massive human rights crime makes cutting off weapons shipments to Mexican military and police all the more necessary and urgent.

Researcher and Analyst of US Military Policy, Policing and Human Rights