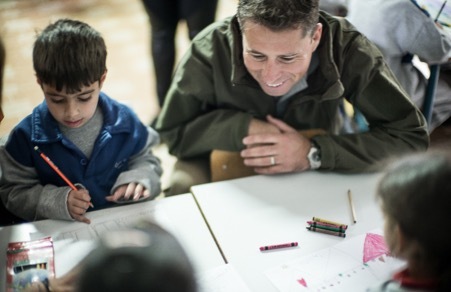 Prof Tom Fletcher CMG is the Global Strategy Director of the Global Business Coalition for Education.

I was back in Jordan and Beirut last week, as part of a visit to four countries in four days to promote the effort to get 1m Syrians back to school. Jordan was where I first studied Arabic. And Lebanon? That's a longer story, told elsewhere on this blog. The short version is that it has a special place in my heart. Going back was just one more addict returning to their drug.

As UK Ambassador in Lebanon for four years, I was involved in the diplomatic effort to stop the war in Syria. We failed to do so, with the grim consequences that continue to follow - on the BBC last week, I joined others in despairing at the continued flouting of that most basic rule of war: don't kill doctors.

That failure of diplomacy is one reason for my involvement now in education. It left me determined that children fleeing conflict in the Middle East and beyond deserved the education they craved. Imagine those 1m Syrian children in ten years, with education behind them - teachers, doctors, parents. The builders of a new Syria. Or imagine them in ten years without education ...

At the World Humanitarian Summit in Istanbul later this month, the Education Cannot Wait fund will help millions of children who are deprived of schooling because of emergency situations - including wars, natural disasters and health crises. Our aim is to raise almost $4 billion to reach 13.6 million children within five years and 75 million by 2030.

Compared with this global vision, getting 1m Syrian children into school may seem a modest aim. But the challenge is immense. In Lebanon, the government is working at an extraordinary pace, to get all children aged 5-17 in Lebanon into education by the end of the 2016/17 school year. Led by Elias Bou Saab, the Ministry of Education has delivered transformational results - over 200,000 Syrian children in formal schools achieved through the 2015/16 enrolment campaign. In Jordan, partnerships between government and business are aiming to get 145,000 refugee children in its state school system - I was hugely encouraged that they might just pull it off, making Jordan the Leicester City of the humanitarian effort.

I visited the Mtein Public Primary School in Lebanon, where tireless director Mrs Najah Banna told me about the challenges of operating the double-shift system. As many children arrive at school hungry, the school, supported by Theirworld, is now offering pupils milk and healthy snacks to boost their capacity to learn (and to beat visiting ex envoys in arm wrestles). Those working in schools like this are the heroes of the effort, far away from the cameras and podiums of international conferences. The students gave me extraordinary and heartening pictures of their 'safe schools', a refuge from the horror of fleeing the Syria conflict. We'll share these with world leaders in Istanbul later this month.

I also visited a SABIS school. SABIS already have an amazing reputation for their private schools. They are now offering the same standard of education to those who cannot afford it, including hundreds of Syrians. Their founders are a great example of what can be achieved with passion, determination and application, and a counter to those who wring their hands and worry that it is just all too difficult.

In Lebanon and Jordan, I also met other business leaders who have taken on this challenge as theirs, representing the generational struggle to avoid a lost generation. Their ingenuity and drive for results could fill the gap that governments and NGOs are saying they cannot fill themselves. We're seeing the disruption of classic education models. And also the future of humanitarian action. In Istanbul, GBC-Ed will report back on how the private sector is stepping up action, building on the 75m USD of support announced at the London conference in February.

The progress in Lebanon and Jordan is incredible. But we need to do more to transport kids safely and cost-effectively to school; reach pupils with the best online educational content, so that they can take control of their learning; and build the economic opportunity so that it does not go to waste. We need more finance. But we also need more help - I believe that it is possible to create a huge collaborative effort through which anyone can offer their time, ideas and energy to the effort. Watch this space.

And maybe, through the example of national compassion and vision that they set, Lebanon and Jordan can continue the journey from countries often battered by external influence, to nations that lead and inspire those of us struggling to comprehend much smaller numbers of refugees.

They are demonstrating that there is a better answer than another brick in the wall, whatever snake oil is offered by leaders who admire the Middle East more for its demagogues than its diversity.

And the products of this education effort can prove that the pen is still mightier than the sword. 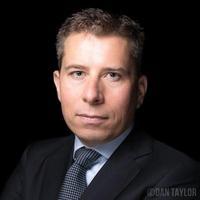 Tom Fletcher is a Visiting Professor at NYU Abu Dhabi, and the Global Strategy Director of the Global Business Coalition for Education. He was UK Ambassador to Lebanon, 2011-2015. His book on the future of power and diplomacy is published by Harper Collins in June 2016, and he is leading a review of UK diplomacy for the FCO.