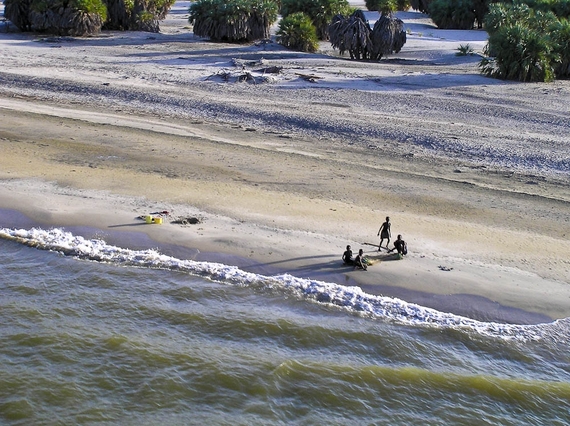 As a World Heritage Site, Kenya's Lake Turkana stands among august company that includes the Grand Canyon, the Taj Mahal and the Great Wall of China. The remote lake offers a refuge for the world's largest crocodile colony and numerous other rare animal species. According to the World Heritage Committee, its fossil finds have "contributed more to the understanding of human ancestry than any other site in the world."

Lake Turkana -- the world's largest desert lake -- also offers water, food and livelihood to 300,000 indigenous people living in a barren environment. Yet this precious source of life is now under threat from rampant dam building and sugar plantations in neighboring Ethiopia. When the World Heritage Committee convenes for its annual meeting next week, it will need to decide whether to speak up for this unique global treasure.

Lake Turkana depends on the Omo River for 90 percent of its freshwater inflow. In January 2015, the Ethiopian government closed the Gibe III Dam and started filling its reservoirs. The government and private investors are also using the dam to develop huge sugar and cotton plantations along the Omo River. If the full scheme is realized, the dam and plantations will withhold and withdraw huge amounts of water from the river.

As a consequence, the water level of Lake Turkana could drop by as much as 20 meters. A prominent Kenyan hydrologist has warned that "the result could be another Aral Sea disaster in the making."

"Once the dam is operating, everything people feed on will disappear. Starvation will take over," said Turkana pastorialist Rebecca Arot.

The World Heritage Committee has warned about the threats to Lake Turkana for many years and has demanded action from the Ethiopian government. In 2011, the Committee expressed "utmost concern" about the proposed Gibe III Dam and urged the Ethiopian government to "immediately halt all construction" on the project. The Committee's experts also found that Lake Turkana meets the conditions of a World Heritage in Danger -- a status that alerts the world community to the potential loss of a global heritage and encourages corrective action. Since 2012, they have repeatedly confirmed this alarming assessment.

The World Heritage Committee has rung the alarm bell on many other endangered sites, from the ancient city of Aleppo to Everglades National Park. From June 28 to July 8, 2015, the Committee meets again for its annual session in Bonn. If it wants to keep up its credibility, it needs to denounce the Ethiopian government's delaying tactics and declare Lake Turkana a World Heritage in Danger.

At the same time, the country's aid donors -- including the U.S. government and the World Bank -- need to put pressure on Ethiopia to stop the destruction of a unique global treasure. President Obama has an opportunity to do so when he visits Ethiopia at the end of July.

We can't stand by idly as another human-made social, environmental and cultural disaster unfolds. An online petition by International Rivers calls on the World Heritage Committee to stand up for Lake Turkana and declare it a World Heritage in Danger. Sign the petition now.