The Senate intelligence committee hopes to release soon a redacted summary of its 6,300-page report on the CIA's interrogational torture program. As we wait, the committee is wrangling with the CIA over redactions that the CIA is demanding. So it is an opportune moment to think about how the public might react to the report.

Since President Obama took office, Americans in increasing numbers have supported the use of torture against suspected terrorists. Ironically, there was less support for torture during the Bush administration than under President Obama. 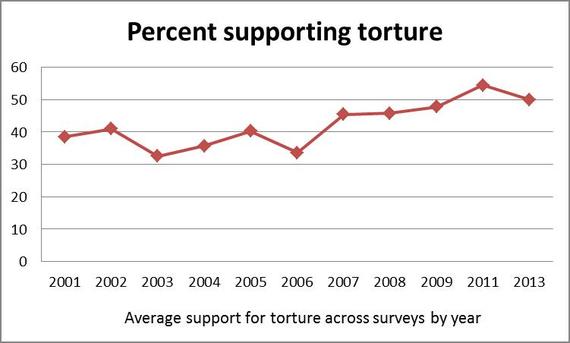 An Associated Press survey last year found that 50 percent of Americans think torture can be justified at least sometimes, with a similar percentage (47 percent) expressing misgivings, but only one in four saying it can never be justified. Another question asked Americans whether they favored or opposed (or neither) using harsh interrogation techniques against suspected terrorists to seek information: 51 percent favored the use of these techniques whereas 38 percent said they were opposed.

This support may be partly because survey questions sometimes imply or assume that torture is effective in getting that information. Certainly, former Bush administration officials, from Vice President Dick Cheney to career CIA officer Jose Rodriguez, have propagated that view, especially after the successful raid against bin Laden. These efforts appear to have worked. In a Fairleigh Dickinson University 2011 national survey, nearly two-thirds (65 percent) of Americans said that the techniques were somewhat or very effective in gathering useful intelligence. The 2012 feature film about the bin Laden raid, Zero Dark Thirty, suggested waterboarding generated vital information and perhaps helped cement the view that interrogational torture works, despite the fact that the CIA's own acting director disputed that impression in an open letter to agency employees.

The Senate's summary, when finally released, may change the public perception of torture's effectiveness if it reveals that the CIA's techniques were not as sanitized, clean, or controlled as has been claimed. This much, at least, has been suggested by leaks about the Committee's summary. But we should also know it from the logic of interrogational torture which, CIA claims to the contrary, has not changed in more than two millennia of the practice. Knowing what the techniques were, here are some of the specifics the Senate report could contain.

First, the information extracted was unreliable. The quantity of useful, actionable intelligence paled by comparison to the volume of false, misleading and unhelpful "information" extracted. Second, the harsh interrogational methods exceeded the CIA's own guidelines, being used more frequently (longer duration, more applications) and with greater intensity (harder slaps, colder water, more painful shackling). More specifically, the report may touch on some or many of these excesses:

• Insult/facial/abdominal slaps. Interrogators exceeded the guidelines requiring an open hand and only on certain parts of the body and subjected the detainees to beatings with fists, feet, and other objects.

• Wall standing. Detainees were forced to remain in the wall standing stress position (forehead on wall, fingertips leaning against wall) longer than 48 hours with their hands above their head.

• Temperature manipulation. Detainees were subjected to temperatures lower than the minimums called for and/or for longer durations than permitted.

• Dietary manipulation. Some detainees received less than the required 1,000 kilocalories per day.

• Water dousing. Some detainees were doused with water colder than the guidelines permitted and/or for longer duration.

The key conclusion expected is that these "interrogations" produced less information than was promised and more torture than even the CIA intended. But it remains to be seen whether the Senate's report will change public opinion about the efficacy and desirability of interrogational torture. This is an especially interesting question in an atmosphere in which polls show an increasing public apprehension about the Islamic State and its potential threat to the United States.