As the new Congress convenes this week, the prevailing question is whether Republicans will prove they can govern now that they rule both houses. For those who keep score, as everyone of voting age should, let's define "govern."

We should watch for three types of action by the Republican majorities. Based on Republican proclivities in the last Congress, we are most likely to see only two of them. Here they are:

Power plays: If Congress passes legislation it knows the President will veto and it does not have the votes to override, it is a sign that Republicans are more interested in taking the White House back in 2016 than they are in governing. Their show votes will be designed to persuade voters that the President and his Democrat colleagues in Congress should be blamed for partisanship and gridlock. Approval of the Keystone Pipeline, bills to revoke or undermine EPA's authorities, and attempts to unravel Obama Care will belong in this category.

Un-governing: When Congress tries to roll back the Obama Administration's work so far to address major national problems, they will not be governing; they will be un-governing. One example would be legislation to undo President Obama's work on immigration reform without passing a workable alternative. Attempts to roll back or neutralize EPA's power to regulate greenhouse gas emissions would be another example. The Administration is working to limit carbon dioxide and methane emissions because the limits are necessary to protect the public welfare, but polluters are not regulating themselves.

Watch for Congress to un-govern by attacking Administration policies in several ways, from using the budget process to deny funding for EPA to administer its carbon rules, to using the relatively obscure Congressional Review Act to roll back regulations with simple majority votes in the Senate.

Actions like these would be contrary to the position of a sizable bipartisan majorities of Americans who want government to act against climate change and in favor of clean energy. A poll by the Yale Project on Climate Change Communications found three months ago, for example, that 67% of American adults support strict limits on carbon emissions from existing power plants. If members of Congress from either party vote otherwise, it will be further evidence that they are serving the fossil energy lobby rather than the nation.

True governing: The principal sign of genuine governing would be congressional leaders traveling to the other end of Pennsylvania Avenue to sit down with the President and work out legislation they approve and he will sign. There are many approaches to reducing carbon emissions including several market-based options that meet the traditional conservative test of good policy.

We should not hold our breath, however. It is more likely that Republican leaders, with their eyes on 2016, will not want the President to be successful. Some vindictive conservatives on the Far Right will want to make sure that President Obama does not leave a positive legacy.

So, will the Republican majorities in the House and Senate prove over the next two years that they know how to govern, in the best sense of the word? Let's watch and see. 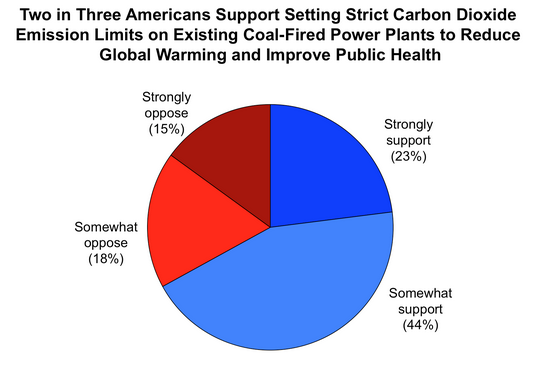 Credit: Yale Project on Climate Change Communications, October 2014 survey of 1,275 American adults, which asked: "How much do you support or oppose the following policy? Set strict carbon dioxide emission limits on coal-fired power plant to reduce global warming and improve public health. Power plants would have to reduce their emissions and/or invest in renewable energy and energy efficiency. The cost of electricity to consumers and companies would likely increase."