Everyone knows that Popeye is " ... strong to the finich 'cuz he eats his spinach."

But what was this Sailor Man like before he discovered that those leafy greens gave him amazing strength? And what were Popeye's early days at sea like? And where exactly did he get that anchor-shaped tattoo? 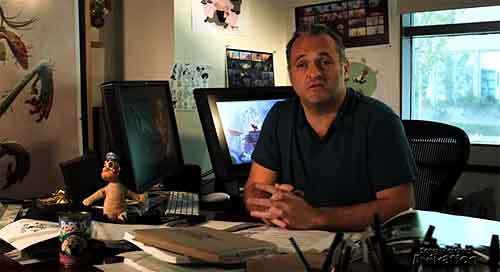 That's what Genndy Tartakovsky aims to find out with that feature-length Popeye project that he's currently developing for Sony Pictures Animation.

"Popeye holds a special place in my heart," Tartakovsky explained during a recent conversation. "When my family and I first moved to the United Stated from Russia in the 1970s, Max Fleischer's black and white Popeye cartoons were among the very first pieces of animation that I got to see while watching television. And I just loved how physical they were, how wild the humor was in those shorts."

"To be honest, I think that it was those black and white Popeye cartoons that put me on the path to becoming an animator," Genndy continued. "And -- of course -- it didn't hurt that, when I finally went to film school, one of my animation instructors was Gordon Sheehan, this 90 year-old who had actually worked on some of these black & white Popeye shorts when Fleischer Studios was still based in New York City." 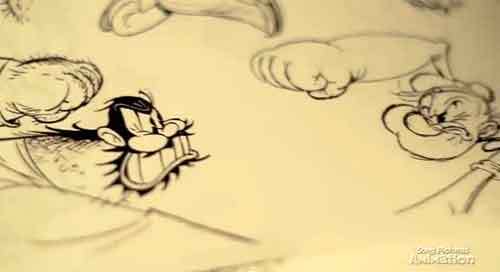 So imagine Genndy's reaction when he was approached by Sony Pictures Animation as he was wrapping up Hotel Transylvania to come direct a Popeye feature film.

So what would a Genndy Tartakovsky version of a Popeye movie be like? He describes this yet-to-officially-be-greenlit project as "a film that would have the same sort of crazy physical humor that we put into Hotel Transylvania. Only this movie would have 10 times as many physical gags."

Through the script for this film is still being written, Genndy clearly envisions his version of a full-length Popeye animated adventure as being an origin story. It would feature Popeye having run-ins with his classic nemeses, Bluto and the Sea Hag. Not to mention cameo appearances by that memorable moocher, Wimpy.

"And while the Fleischer shorts had a lot of great dialogue -- I actually picked up a lot of bad grammar from watching these cartoons as a kid," Tartakovksy laughed. "The movie that I'd really like to make here would have half the dialogue that you typically have in a full-length animated feature. I'd really like the physical humor, the uniquely comical way that these characters move -- the sort of stuff that you can only really do in animation -- carry this picture."

Are you not quite clear on what Genndy is looking to do with his Popeye project? Here. Below is a ... Well, it's not a test for this proposed movie. Nor is it a scene from the finished film. It's more of a window into the world that Tartakovsky wants to take us to. A place where a version of Popeye exists that would appeal to contemporary audiences while still being respectful of this film's original source material. Which is those great black and white shorts that Max Fleischer Studios churned out from 1935 to 1940.

And you wanna know the amazing part (and no, I'm not talking about Eugene the Jeep)? It's that -- after you finishing watching this piece of nearly finished animation that Genndy and his team put together -- you're going to think, "What a great three-minute-long clip."

But here's the thing: That Popeye clip is really only 1 minute and 15 seconds long. Tartakovsky crammed so much comedy and action into this short sequence that it seems longer. Which means that a full-length animated feature that took this approach to Popeye would be a real feast for the senses. An everything-INCLUDING-the-kitchen-sink celebration of comic mayhem.

"Don't worry. I'd still like my Popeye feature to have a lot of heart," Genndy said. "There's still his relationship with Olive Oyl and his Dad to explore. But what I'm really looking to do here is take what made those old Max Fleischer shorts great and then create the sort of film that contemporary audiences could enjoy. Show them the version of Popeye that I fell in love with when I was a kid."

So when does this highly promising motion picture officially begin production? Well, as I stated earlier in this article, Sony has yet to lock a release date. In fact, the last time this studio updated its release schedule, Popeye had slipped from being a 2014 release to a 2015 release.

"I'm kind of hoping that the reaction from animation fans will be so loud and so strong that Sony will be eager to put Popeye into production," Genndy continued. "That way, once we finish working on Hotel Transylvania 2, we just move on over and begin working on Popeye. And then have that film out in theaters in a year or two."

Which -- you have to admit -- is a pretty bold move by Hollywood standards. But Popeye is clearly a passion project for Tartakovsky.

So if you like what you see in this Popeye proof-of-concept, why not help make Genndy's dream a reality by sharing this footage with a few Facebook friends? Or -- better yet -- tweet this story out so that Sony will then realize that there really is an audience out there for a movie whose title character says things like, "I yam what I yam and that's all that I yam."