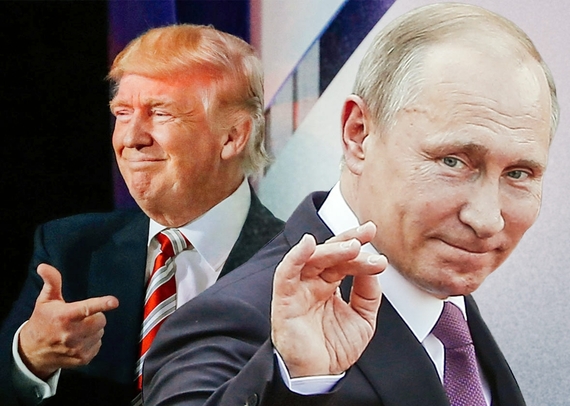 Consequences for President Donald Trump's rhetoric differ substantively from those of Candidate Trump as such may affect his personal culpability over potential crimes under international law and now that he is Commander in Chief. Incitement may be enough to create criminal culpability. However, being in the chain of command, at the very top of it, President Trump assumes responsibility for not only setting the criteria for US military and operatives to act consistent with US and international law but also to prosecute those who in their official actions may violate, particularly if the crimes may take on the character of systematic violations. Trump has already confirmed his preference for torture after assuming the Presidency and he has expressed his intention to kill innocent family members of terror suspects while candidate. In order for any conviction to occur there would have to be a court identified willing to entertain investigation and prosecution as well as sufficient evidence of the alleged crime, unlawful killing or other "grave violations of international humanitarian law" being committed during President Trump's tenure.

Would Any Court Entertain Potential Prosecution?Venues such as the International Criminal Court could appear remote, for now. However, national courts including US courts could also enforce criminal and/or civil provisions of such international law, particularly to degree such have been adopted as part of such country's laws, as they have been in large part in western democracies and even the US. Sovereign immunity may preclude prosecution specifically while in office. However, other avenues may be particularly suitable to this political leader, those that seek both civil and criminal liability in view of the fact that Donald Trump remains owner of a self-proclaimed global business empire. Judgments against such could be secured in national courts in random states but also the United States. The Presidency may not protect Donald Trump from claimants as it did not then-US Commander in Chief Bill Clinton when accused of sexual misdeeds. Finally, violations of international humanitarian law as adopted in US law may be the basis for impeachment proceedings particularly if these violate America's national interests.

The US is not currently party to the International Criminal Court, along with a rather curious club that includes Russia, China, Pakistan, India, Iran, Israel and Saudi Arabia. The ICC in its codes and practice has been most influenced and dominated by western democracies, particularly America's European allies. Some previous US Administrations though have worked to deflect potential jurisdiction in the case of US citizens, weakening America's efforts to instill the rule of law around the globe including when US interests are directly at stake. Some current African despots have now also sought to free themselves of potential investigation and prosecution, after they engaged in behavior potentially culpable under international law. By the actions of the UN Security Council, (where the US, Russia and China hold permanent veto wielding seats), potential indictment could be extended as well as delayed to states/nationals regardless of venue or citizenship. Even sovereign immunity may not be a bar as Sudan's sitting President was indicted by the ICC, (although there has been a more than conspicuous failure by Sudan or other neighboring states to detain the indicted.) Nonetheless, because UN Security Council measures may be needed, it is unimaginable that leaders in China or Russia or current US representatives would allow for ICC action to proceed on Trump, at least not as long Trump is in authority or a like minded and potentially similarly culpable Putin. (See: "Might Putin Face International Criminal Court by Annexing Crimea?") Still, while neither Trump or Putin appear likely to stand as defendants before the ICC, nonetheless the development of international criminal law is ever more relevant to national law and courts as encompassed by the Rome Statute, (to which I was signatory and Vice-Chair of preparatory negotiating committee.)

An Evolving Jurisprudence that is Defining National Laws and Courts as well:

The ICC was not intended to be a court of primary jurisdiction and continues to preside as tribunal of complementary jurisdiction that would only act if national courts are unwilling or unable to intercede. The ICC though through interaction of western democracies and civil society. (also anchored mainly in the US and Europe), continues to further the standards and consensus. This includes everything from war crimes to the more recently defined "crime of aggression" to crimes against humanity, which could be prosecuted for actions taken by a country's political leadership against its own citizens/people, as may be the case of Sudan or the Assad regime in Syria.

Reaching the Assets of the Culpable:The more realistic investigation and prosecution to Trump may come from national courts, within western democracies or the US. Plaintiffs as well as prosecutors could seek remedy to Trump in ways generally not a realistic option before. Trump has assets all around the globe which could be part of any reward for relief. During my tenure as the Ambassador of Bosnia & Herzegovina to the UN, Foreign Minister and Agent before the International Criminal Court, we worked with independent legal counsel and advocates who sought relief on behalf of a religiously diverse group of claimants who had been sexually assaulted by the forces under the command of General Ratko Mladic and self-styled President of Republika Srpska, Radovan Karadzic. Substantial and overwhelming evidence was presented and judgments were obtained for monetary damages, including in US Courts. However, there were no apparent assets against which such judgments could be executed. Trump, to the contrary, has projected his assets and presence as a global empire, and he has not divested since assuming office.

Body of Evidence of Intent toward Systematic Abuses?

Deterrence is an objective, even as the Trump Administration responds to challenges with even more audacious assertions of "alternative facts." The "Mexico Wall" or "Muslim Ban" that President Trump is seeking to impose perhaps to pose challenges as to how to confront. However, they do add to the body of evidence of discrimination and possible persecution on basis of identity, religious, ethnic, sexual orientation or otherwise. History teaches that such fear mongering rhetoric more frequently leads to wars and military adventurism rather than the purported goal of isolationism. The slogans employed by Trump, as "America First" have direct roots with those pre-WW II sympathizing/acquiescing to the Nazis. If some would argue that this is disconnected from recent history or coincidental or that President Trump is unaware, (even as his father has been reported to belong to this pre-WW II "America First" society), then perhaps we should focus on his sought alliance with Vladimir Putin. While Putin may be effectively shielded from ICC prosecution, nonetheless, his Kremlin has been directly linked to violations in the invasion of Georgia and Ukraine and the annexation of Crimea. In Syria, Putin's military has been accused by independent investigators as well as US and European officials of war crimes. (There is also credible evidence of "crimes against humanity" committed by Putin and/or his allies within Russia's borders.)

By aligning US policy in Syria publicly with that of Putin's Russia, is there a lack of strategic as well as ethical wisdom? The often asked question is whether this is a recruiting, strategic gift to ISIS as well as abdication to Assad, Teheran and Putin. (Read: "Putin Drops the Bombs & Deals the Cards in Syria & Ukraine.) However, from a legal perspective, does this constitute an embrace of the Russian military's previous alleged crimes? Further, is it evidence that the US plans to adopt the same tactics, violations through joint operations with Putin's military or even by America's soldiers acting on their own? This places US military personnel in a very compromised situation, legally, strategically and in the trust/working relationship with local allies, (who now may also be offended, upended or otherwise confused by "Muslim Bans" or Trump's other statements including admiration for Putin).

Past rhetoric to prosecute previous US political leaders for violations of international law has largely been without consequence, as well as some would argue adequate evidence. Under the Trump Presidency this risk would appear to be substantially shifting, including for those unwittingly or otherwise acting on potential Trump directives. Trump's own words would reveal intent as well as action, where ambiguity or silence may have been a more clever precedent. What happens if the new US Secretary of Defense General Mattis resigns, (as President Trump has proclaimed him as the check on his inclination to employ torture)? Still, the chance of Trump ending up behind bars appears remote to say the least, but impeachment may be a more likely consequence of possible violations as ever more developed international humanitarian law also becomes part of US standards. And, unlike previous US Commanders in Chief, President Trump could be hurt in an unprecedented manner, where perhaps he is most sensitive, in his personal wealth which he has sought to perpetuate and expand while in the White House.