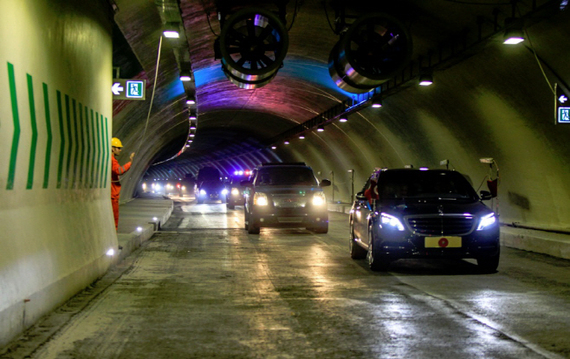 By AsiaToday reporter Jina Koh - The Eurasia Tunnel, the first-ever road tunnel linking Asia and Europe, will be fully operational on Dec. 20. People are paying attention to whether the construction of a huge undersea tunnel connecting two continents will lead to the dream of high-speed rail expansion.

According to Turkish daily newspaper Daily Sabah and other local media outlets, Turkish President Recep Tayyip Erdogan and Prime Minister Binali Yıldırım will be the first to drive through the tunnel in an opening ceremony on Tuesday.

The Eurasia Tunnel, which is a 14.6 kilometer long, including a 5.4-kilometer section under the Bosporus, is a mega underwater tunnel project with an investment worth $1.24 billion. SK Engineering & Construction participated in construction.

Bosporus Strait is the only channel connecting the Mediterranean Sea and the Black Sea. The Eurasia Tunnel will connect Kazlicesme on the European and Goztepe on the Asian part of Istanbul. As one part of Istanbul lies in Europe and the other part in Asia, people had to either cross the two existing bridges or take a ferry in order to travel across the two sides of the city.

The Turkish government has great expectations for the Eurasia Tunnel, as it will reduce traffic jam and cut travel time from 100 minutes to 15 minutes. The tunnel is designed to withstand natural disasters such as earthquakes and tsunamis. Moreover, a museum where the story of the construction of the tunnel will be digitally narrated will also open in the upcoming days.

The system used for the construction is cutting edge. Modern lighting technology and mass ventilation systems, special fire systems and emergency evacuation systems are designed together. The tunnel also has a closed circuit camera system to monitor traffic 24/7.

Three years ago, Turkey opened the Marmaray Link, the world's first undersea railway linking Asia and Europe. The Marmaray runs under the Bosporus, the strait that connects the Black Sea to the Sea of Marmara and divides Istanbul between Asia and Europe. It is the deepest of its kind in the world at 60 meters. It was first suggested by Ottoman Sultan Abdulmecid in 1860, but technological and financial difficulties prevented the project from coming to fruition. The Turkish media outlets congratulated the project as it fulfilled a 150-year-old dream.

Intercontinental undersea tunnels could ultimately boost ambition for high-speed railway construction. Russia, which is located on both Asia and Europe, also has an ambitious dream of building an undersea tunnel that would connect Asia and the United States. The tunnel is called Bering Strait Tunnel, which would connect the Chukotka Peninsula in Russia and the Seward Peninsula in the US. state of Alaska. The plan was first proposed four years ago by Vladimir Yakunin, then president of the Russian Railways Corporation.

The plan is to connect the existing Trans-Siberian Railway (TSR) with existing railways in Europe and Asia to pass the Bering Strait through an undersea tunnel. The fantasy road trip from London to New York might cover over 20,000 kilometers. Since it's a large-scale project, it takes huge amount of time and money. However, the actual progress is uncertain due to the tensions between Western countries and Russia.

Yet, Russia has not completely abandoned its ambitious scheme. Earlier in October, Japanese newspaper Sankei Shimbun reported that the Russian government had asked the Japanese government to extend the TSR to Japanese island of Hokkaido. If the extension project is realized, a new route would cross the Strait of Tartary by bridge or underwater tunnel. The line would then cross into Japan through a tunnel to the island of Hokkaido through Soya Strait.

China also has an underwater tunnel initiative to build a high-speed railway route from Beijing to the United States via Russia, running under the Bering Strait to Alaska, Canada and America. The route would need two undersea tunnels; one running from Russia to the Big Diomede Island, and one from Little Diomede Island to Alaska. The two islands could be crossed by a third tunnel or a bridge.