The most important political and intellectual reality in America today can be seen in a 2006 CBS News poll, which found that a large segment of Americans "do not believe that humans evolved." This sentiment is usually discussed in religious terms. I suggest it should be seen as a political statement.

The Gallup Organization addressed the same issue, but also included the age of the Earth, and conducted a series of polls of American adults in 1982, 1991, 1993, 1997, 1999, 2001, and 2004. In each survey the wording of the questions was kept the same, so that the polls would be equivalents, and multi-year analyses could be carried out. Here is the data from the poll taken in November 1991. The only significant difference between this and the 2004 poll is that in 1982, 44 percent held the Creationist view and in 2004 this number was 45 per cent. 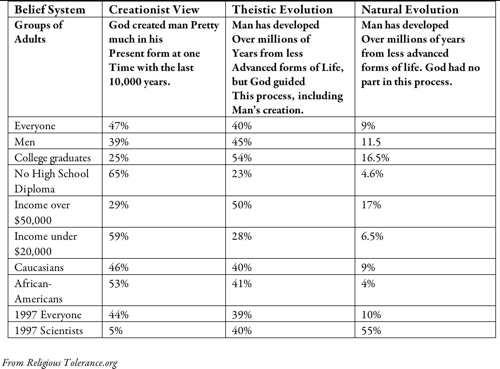 In 2005, The Pew Research Center for the People & the Press and Pew Forum on Religion & Public Life, carried out a poll involving 2,000 adults, that gives us another nuance of this prospective. They reported 42 percent of the public believed that "humans and other living things had existed in their present form since the beginning of time," and that this rose to 70 percent amongst White Evangelical Protestants, and decreased to 32 percent in mainline Protestant churches, and -- surprising to some, perhaps -- to 31 percent amongst White Catholics.

By 2006, the Creationist position was affirmed by 55 percent of Americans. Think for a moment about what this means: More than half of America has discarded much of the hard won knowledge of the past 500 years -- essentially the age of modern science and medicine. Astrophysics. Gone. Astronomy, Gone. Paleontology. Gone. Geology. Gone. Biology. Mostly gone. Genetics. Gone. The general laws of physics such as the speed of light found to be defective. It is impossible to believe the Earth is less than 10,000 years old, that God manufactured it in six days, and that dinosaurs and humans once co-inhabited the planet, and accept any of those disciplines. As the Institute for Creation Research notes in its Tenets of Creationism, "...all genuine facts of science support the Bible." What many would think of as the crown jewels of the human intellect, part of what makes it possible to be optimistic about humanity must, in the worldview of Creationism have little or no weight.

This schism has powerful political implications. A 2007 Gallup poll found that, "The majority of Republicans in the United States do not believe the theory of evolution is true and do not believe that humans evolved over millions of years from less advanced forms of life."

The six-day literalism of this worldview I can understand, it is Scripturally based; these are Scriptural literalists. But the Book of Genesis says nothing about how old the earth is. It is worth spending a moment asking: where does this idea come from? It traces back to James Ussher (1581-1656). Living at the end of the reign of Elizabeth I, and into Cromwell's government, he rose to become head of the Irish Anglican Communion, in Roman Catholic Ireland, Archbishop of Armagh, and Vice Chancellor of Trinity College, Ireland's great university. He had begun as a brilliant scholar training at Trinity and like many academics was very competitive about advancing his scholarly prowess. Being a minority he was passionately committed to showing that Protestant scholarship was in scholarship as in faith superior to the Jesuit academy which dominated his world. Creationism had nothing to do with it. His was a 17th century version of an academic smackdown. It wasn't the date per se, it was widely believed the world was about 4,000 years old. The Astronomer Johannes Kepler (1571-1630) placed the date at 3992 B.C. What Ussher was trying for was less an exercise in theology than one in finer computation.

Working through the chapters of the Bible with great care, counting generations, and using whatever way points the Bible provided, "Adam lived 930 years and he died," Ussher pursued his self-set problem for 20 years, finally arriving at a date he felt he had proved. In the summer of 1650 he published from London, The Annals of the Old Testament. It begins: "In the beginning, God created heaven and earth, which beginning of time, according to this chronology, occurred at the beginning of the night which preceded the 23rd of October in the year 710 of the Julian period." In a marginalia in the right side of the opening page of his own copy of his work he scribbled, the date in "Christian" time -- 4004 B.C.

Although Ussher gets the credit, he was actually preceded by six years, 1644, by his contemporary Sir John Lightfoot (1602-1675), Vice Chancellor of Cambridge (also a Protestant). In 1897, historian Andrew D. White in his book A History of the Warfare of Science with Theology in Christendom wrote,

...an overwhelming majority of the most competent students of the biblical accounts was that the date of creation was, in round numbers, four thousand years before our era; and in the seventeenth century, in his great work, Dr. John Lightfoot, Vice-Chancellor of the University of Cambridge, and one of the most eminent Hebrew scholars of his time, declared, as the result of his most profound and exhaustive study of the Scriptures, that "heaven and earth, centre and circumference, were created all together, in the same instant, and clouds full of water," and that "this work took place and man was created by the Trinity on October 23, 4004 B.C., at nine o'clock in the morning." (Emphasis added)

Why, then, do we know Ussher, and not Lightfoot, with whom he agreed, and who advanced a chronology honed to the hour? We do so because when Clarence Darrow was doing research for the 1923 Scopes "monkey" trial, in which he would examine William Jennings Bryan, he decided to use the Ussher chronology as a rhetorical weapon. He would force the anti-evolutionist Bryan to affirm or deny it. In one of history's great ironies, it was the examination that made people aware of it and, thus, Ussher's bizarre date entered American evangelical consciousness, and became a force in American political thought. Such that today 55 per cent of Americans have chosen what should be an obscure academic story, recounted at history conferences, over the millions of hours of scientific inquiry that have gone on since the 17th century publications of Lightfoot and Ussher. How can something like 150,000,000 million people be so willfully ignorant? And what are its implications for our democracy's health and well-being?

"Wherever there is a battle over evolution now, there is a secondary battle to diminish other hot-button issues like Big Bang and, increasingly, climate change. It is all about casting doubt on the veracity of science," physicist Lawrence M. Krauss of the Origins Initiative at Arizona State University told Leslie Kaufman of the New York Times last March. "To say it is just one view of the world, just another story, no better or more valid than fundamentalism."

When did ignorance become cool?

For the most part pollsters who do these surveys say it is not that Creationists know better, but publicly say something they feel they must to be good members of their denominations. No. This is something they believe. It is an act of proactive denial. And it has nothing actually to do with the spiritual aspect of human consciousness. It is entirely cultural. Spiritual awareness is gnostic and subjective, and universally sees all life as inter-connected, and interdependent, while demanding no particular intellectual mindset about how physical reality is organized. It is as easy to be a spiritual Tibetan lama as a Hopi shaman, a Jewish rabbi, or a meditating physicist.

It is the Founder's miracle that they devised, and each generation of America has honored, the cyclical bloodless revolutions we call elections. We have just re-enacted their design. Now we will see whether it is science or the calculations of two academics from shortly after the time of Shakespeare, intent on academic one-upmanship, which will define how we conduct ourselves scientifically and medically. If we choose willful ignorance our climate change policies will turn on it. It will decide what we do about stem cell research. It will effect how we educate our children. It will shape what America will become. For almost 30 years, since Ronald Reagan first took office, willful ignorance has been a brake holding back American science, particularly as it pertains to biology, medicine, and climate change. Are we going to make policy on the basis of data, or the dogma of willful ignorance? Think Progress gives us a hint:

Over 100 freshmen Republicans will take their seats in the 112th Congress. These GOPers come from disparate backgrounds, but they are united by their adherence to the extreme wing of conservative ideology -- 50 percent deny the existence of man-made climate change; 86 percent are opposed to any climate change legislation that increases government revenue.

The initial signs are not good.