For 27 years, William Dillon proclaimed his innocence while languishing in a prison cell. Few listened.

Last night, as a free man, he sang the national anthem at a major league ballpark with tens of thousands watching him live, and many more catching him on TV, radio and the Internet.

Despite spending more than half his life in prison wrongfully convicted of murder, the 52-year-old still loves his country enough to proudly sing the ode to freedom. "I just want to inspire people and show them you can come from a place without hope," Dillon told The Huffington Post before his sound check at Tropicana Field in St. Petersburg, Fla. "It's very emotional for me. You're talking to me about freedom."

There's perhaps no topic Dillon is more qualified to discuss. In 1981, Dillon was an unsigned yet talented 21-year-old ballplayer who caught the eye of scouts from the Detroit Tigers. But days before he said he was supposed to try out as a pitching prospect, he was arrested and charged with the beating death of James Dvorak on a Florida beach.

DNA tests on clothes worn by the actual murderer would eventually clear Dillon in 2008, but not before he paid for another man's crime with the best years of his life.

The real killer hitchhiked a ride to a bar and left bloody clothes in the car that picked him up. Police included Dillon in their investigation because five days after the murder he showed up at the beach where Dvorak was found and was questioned by police, according to information from the Innocence Project. Police accused Dillon of the murder after a police dog matched the scent from the killer's discarded T-shirt to a piece of paper Dillon handled.

At trial, a jailhouse snitch testified for the prosecution that Dillon confessed to him while awaiting trial; prosecutors later dropped a pending rape case against the snitch. The driver who picked up the hitchhiker identified his passenger as having a mustache, but Dillon has never grown hair above his mouth.

Although Dillon took the stand and said he was not at the beach that night -- an alibi supported by other witnesses -- a jury convicted him, which led to a life sentence.

The breakthrough after numerous unsuccessful appeals came in 2007 when a judge allowed DNA tests, requested by Innocence Project attorneys, on the shirt thrown away by the killer. The results proved Dillon hadn't worn it. Earlier this year, Florida Gov. Rick Scott apologized to Dillon, who was awarded $1.25 million in compensation.

Now living in Chapel Hill, N.C., with his girlfriend, Dillon is a musician. He plays in a band with other exonerated convicts and has recorded a country album called "Black Robes and Lawyers."

Dillon, who sang in a choir during junior high school, was the lead singer in a rock band he formed with some high school buddies, often covering Deep Purple songs. Wednesday night he serenaded Tampa Bay Rays fans with an a cappella rendition of the "Star-Spangled Banner."

"Mr. Dillon is singing here tonight because his story deserves our attention and because the Rays support Project Innocence," said team Vice President Rick Vaughn in a statement. "Plus, he can sing. His audition tape passed our standards.”

In the stands cheering for him were his girlfriend, Ellen Moscovitz, his two brothers and their families

Considering what he's been through, Dillon shows only minute traces of bitterness.

"I'm 52-years-old, but just 24 as a free man," he said. "I'm a baseball fan, I love our country and I have great respect for what the national anthem stands for." 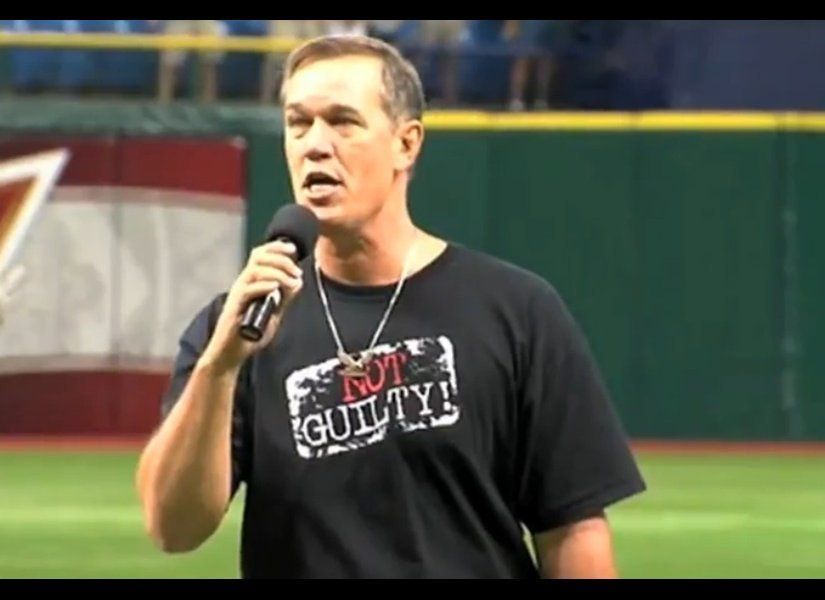 1 / 5
William Dillon
Dillon was released from a Florida prison in 2008 after spending 27 years behind bars for a murder he didn't commit. DNA tests cleared him of the crime. He sang the national anthem at a Tampa Bay Rays baseball game on July 18, 2012.
Sun Sports