Every artistic endeavor, just like every life, carries within its DNA a final form, a completion point, an end. Once that final image, vision or moment is realized, then the limitless becomes limited and all the varying possibilities of what form that art or life might have taken, cease to exist.

And yet, is that absolute?

These are the questions South African artist William Kentridge asked in his Norton Lectures at Harvard in 2012. His newest installation, The Refusal of Time, first produced that same year for dOCUMENTA (13), then jointly acquired by the Met and SFMOMA, and now on view at the Met until May 2014, is an attempt to explore these themes and grapple with the question: Can we avoid the end of all potentiality?

Internationally acclaimed for his films, drawings, operas and theatrical productions that combine fragments of South African history with imagination and the legacy of violence and alienation of the 20th Century, Kentridge is not interested in answers. Answers, he believes, like all claims for complete certainty both personally and politically are always false. Instead, he finds salvation in uncertainty, chaos, ambiguity and play.

The Refusal of Time is Kentridge's elaborate, five-channel video collaboration with filmmaker, Catherine Meyburgh, composer Philip Miller and historian Peter Galison that explores Galison's work on the pre-relativity theories of time by Albert Einstein and French mathematician Henri Poincaré. Both scientists investigated the radical idea, in a newly industrialized and interconnected world, that time was not absolute but relative and resistant to control. And yet, through various means like Greenwich Mean Time and the division of the world into time-zone segments, this is exactly what the colonial powers of the 20th century endeavored to do: to control, to own time. For once you own time, Kentridge points out, the world runs on your schedule.

A personal mediation on the desire to make visible what is invisible, namely time, The Refusal of Time is a non-linear retelling of the story of the French anarchist, Martial Bourdin, the man who sought to blow up the Royal Observatory. Conveyed in five short films relaying around the room, surrounding the viewer with black and white images that move from left to right across screens we see: vaudeville dancers; Kentridge himself climbing on and off his chair; projected maps; metronomes; Kentridge raising and lowering his arms, imitating the metronome; clock faces; charcoal drawings of telegraph wires and palimpsest equations; a mad scientist laboratory where the bomb is concocted; and ultimately, the resulting explosion.

Accompanying these visuals is a layered soundscape of music, chanting and the spoken word, all broadcast from multiple stationary megaphones, and like the films, moving at various speeds illustrating the notion of time shifting across zones. Situated in the center of the room, like a giant organ beating out a rhythm, is an exquisite kinetic wooden contraption, a pumping bellows inspired by an 1870s system that pumped time pneumatically through copper tubes, under the streets of Paris. 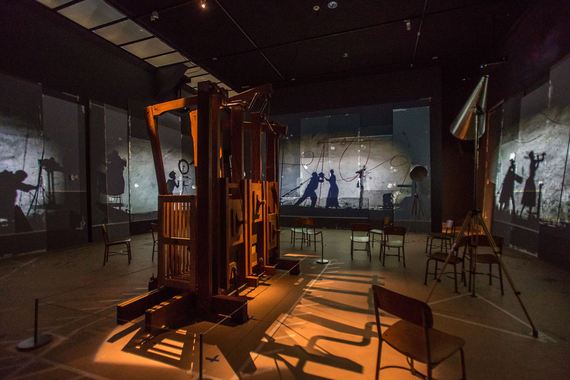 Multi-layered, complex, dreamlike and humanistic, The Refusal of Time is a manifestation, a work of art that seeks to explore ambiguity, to remain unfinished and to avoid the black hole at the end of time. To do this, Kentridge has assembled fragments--from powerful images of social injustice to a flimsy image of a man climbing on and off a chair. He has erased and redrawn, smudged and reimagined, reorganized and re-explored. In the finale, a long shadow procession of dancing celebratory "natives" in silhouette move from screen to screen, carrying the colonial debris away (including a Duchampian bicycle wheel) as they slowly disappear into projected holes. These holes are in fact the musical notations on the roll of a player piano.

One of the debates in history that Galison and Kentridge are exploring is whether or not everything will eventually be lost into a black hole. Will time itself be swallowed up like a dragon consuming its tail? Or, conversely, as string theory postulates, perhaps there will be a trace left, one of Kentridge's erased marks, a fragment that points to something on the surface, a holograph or memory, a residue.

Kentridge doesn't want to answer this. An answer is an end and an end closes the loop, shuts off the field of exploration. What he wants is to engage with the procession, to resist fate, to refuse entropy. As a last gasp, after the parade of dancing natives disappears into the abyss, two figures remain: a man in an inflated white suit--as round as a planet--and a woman gleefully bouncing against his pneumatic belly. And with that final image gamboling across the screen we know that all possibilities still exist, and everything is true. Kentridge has left some concrete trace in the world.

Additional Information: When SFMOM's expansion reopens in 2016, The Refusal of Time will join the extensive body of William Kentridge's work already in or promised to SFMOMA's collection.

Also on view at the Met: In Praise of Shadows: William Kentridge in the Collection. A selection of works on paper by Kentridge from The Metropolitan Museum of Arts collection.