Ray Bradbury, who famously wrote about the future, was a reluctant participant in it when it arrived. Even retroactively. He never learned to drive, despite becoming a resident of Los Angeles in 1934, and for most of his life he refused to fly. The onset of the personal computer held no appeal for him, and the many advantages of Word Processing was not able to seduce him away from his beloved typewriter. Despite the fact that he once predicted, and seemed to approve of, e-readers in a 1983 CBS News interview -- "We're going to need books to carry our libraries with us in our breast pocket. Nothing wrong with that, is there? It just doesn't look like a book." -- when they became a reality in his late years, he railed against them, and, for a time, refused to have his work digitized. For he was a passionate lover of The Book -- of its touch and feel, of the sound of its pages as they are being turned or flipped and of its scent, inky upon its birth; dusty in its old age. He just could not see the plastic and glass text delivery systems as Machineries of Joy

People often found all this amusing about Ray, but it was essential to who he was. For he was, as I described him in my recent book, Searching for Ray Bradbury: Writings about the Writer and the Man, "A Nineteenth Century romantic with Twentieth Century anxieties." This melding, of course, is exactly what made him the most unusual of all the great American writers of the Twentieth Century.

But be all that as it may, shortly before his death Ray did acquiesce to having his books digitized. Why this change of mind? Or, more appropriately, change of heart? While I was not privy to his decision, I do know that he came to appreciate that in an ebook you can enlarge the size of the typeface. For a man who never had the best of eyesight, and whose weak vision was detrimentally affected by the two strokes he suffered, this was not a minor perk. But was it enough to change his heart? I don't think so. If I had to guess, I would attribute Ray's approval to a carnival side-show entertainer, Mr. Electrico, who commanded the young Ray in 1932 to "Live forever!" This became both a motto and a determination of Ray's. He knew, of course, that biologically he could not achieve immortality and live forever. But he also knew, as all writers do, that the children of his mind, his books, could effectively lobby for his immortality -- if his books continued to be read long after his death.

Ray may well have come to the conclusion that if in the future people will read more often electronically than via bound paper, then his immortality would be threatened if his work were not made available in ebook form.

And so, as of April of this year, many of his books have become available for your e-readers. Personally, I am delighted, for I am romantically attached to my Kindle. Although it smells like nothing at all, the idea that when I carry it around I carry around with me the whole of Shakespeare and the whole of Dickens and mega-packs of classic science fiction stories and articles that I find inconvenient to read on a computer and, indeed, egoistically, all of my own books and articles -- I find this idea thrilling. Welcome to the Twenty-first Century I keep saying to myself; happy to be here, I reply.

I was excited the other day when I saw that quite a few of the new Bradbury ebooks were being offered at a short-term discount of only $1.99 each. Ascribing to recession era frugality I immediately downloaded The October Country, A Medicine for Melancholy and Now and Forever. But when I opened them, and looked at the covers, which is always what I do when I get a new ebook, I was shocked, dropped-jawed in my chagrin and sent off into some strange other dimension of disbelief. And if Ray was looking down from above (no, not from heaven, but from Mars) and saw what I saw he must have become livid, he must have become read-faced with anger, sputtering out curses and damnation against his publisher, William Morrow (an imprint of HarperCollins). For the covers are, to be clear about it, stupid rubber-stamp generic templates with just the name of the book in a boring typeface to designate the volume you are reading. 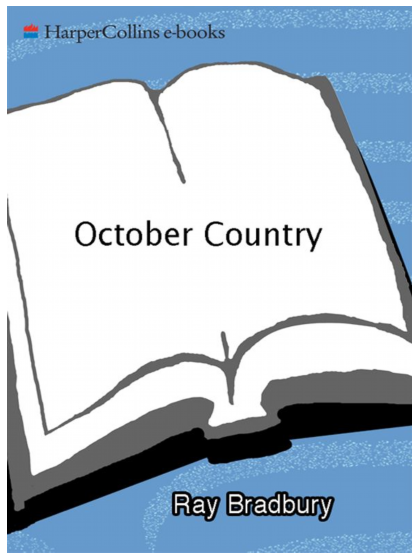 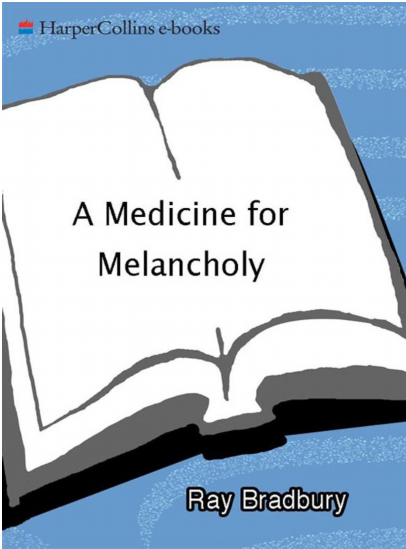 I'm quite sure this would have driven Ray into a mood of murderous intent. Ray loved illustration, and took great care about his book covers. Ray doted on graphic artists and loved their works from comic strips to pulp magazine covers to slick magazine illustrations to antique prints of Gustave Doré and Dickens' good buddy, "Phiz," to paintings by the masters. He was, indeed, himself an artist, cartooning and painting for pleasure. And if you know his work you know damn well that he was one of the most visual of writers. He was particularly fond of artist/illustrator Joseph Mugnaini, whose first edition covers for The October Country and for A Medicine for Melancholy are wild, mysterious, evocative and fun. 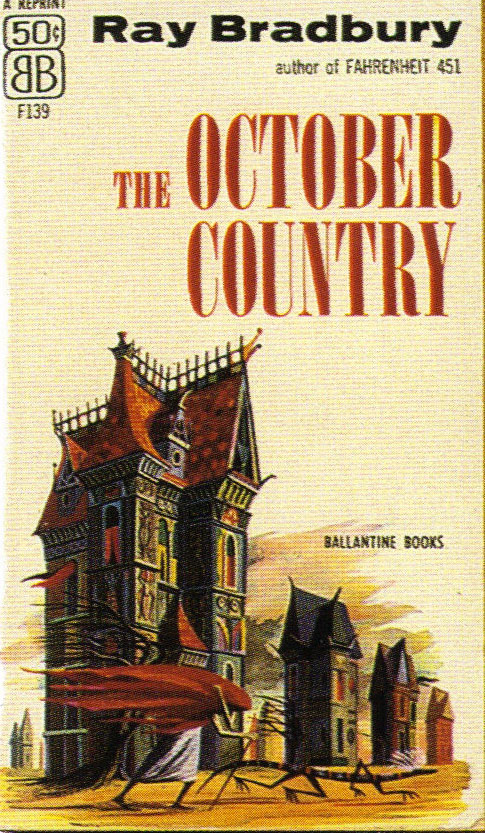 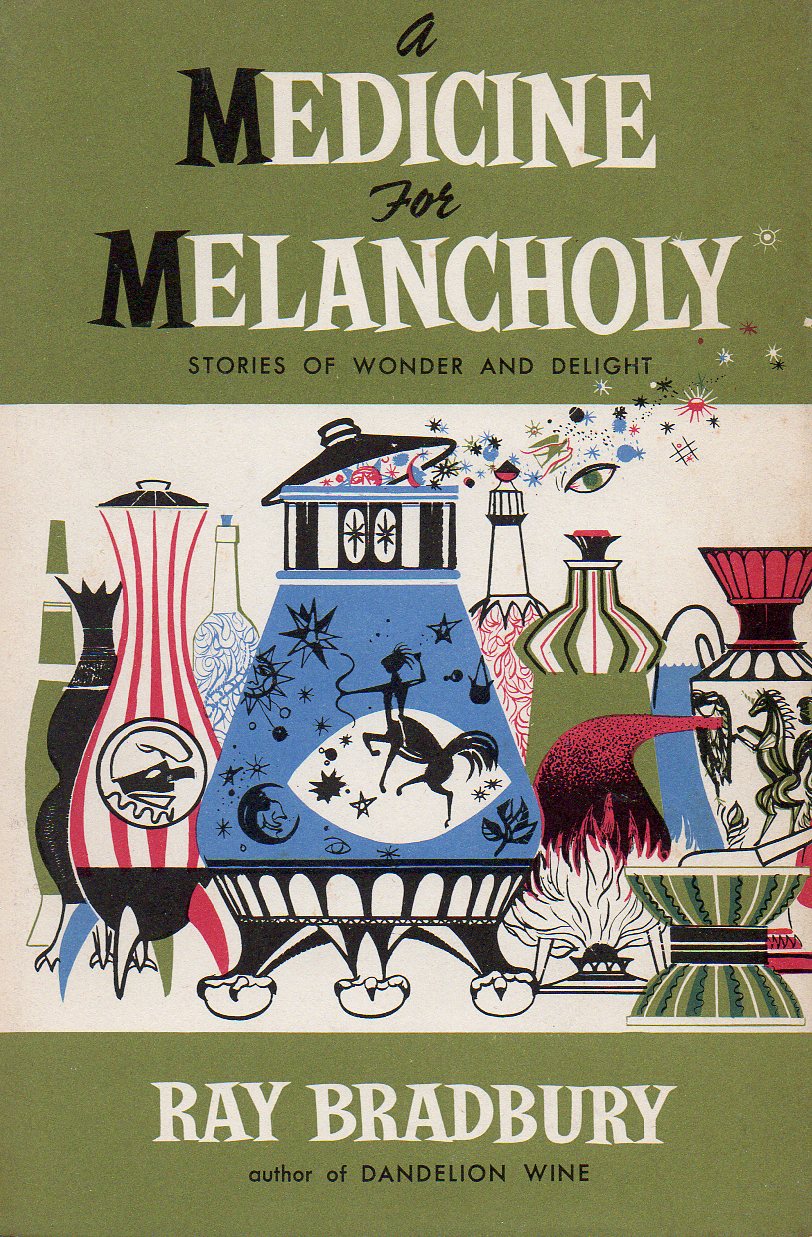 Many other artists did covers of editions, both American and foreign, of Ray's books. Some are better than others, but in being illustrations trying to capture the spirit of Ray's writing, they are all, at the least, interesting. I am going to guess that Ray took great pleasure in them.

To see that the dunderheaded dolts of William Morrow decided to slap onto his ebooks, which he was reluctant to provide permission for in the first place, these generic, mundane, rubber-stamp covers that you wouldn't wish on the worse of hacks, is to see corporate mentality at its most brain-damaged. These covers would have pained Ray deeply. Indeed, I am quite sure he would have cried all night at the sight of them.

"But so what," the dunderheaded dolts at William Morrow might say, "they are just ebooks, just digitized printed matter." Well, you dunderheaded dolts, that's not the point. Whether in print in a bookstore or digitized and sold online, a book's cover is its calling card, its announcement, its declaration, its face. Would you want the face of your child ripped off and replaced with a blank mask? And when most people are probably reading ebooks now on Kindle Fires and iBooks and tablets in color, some with HD displays, the glories of a well designed and illustrated book cover can really, truly come out. With a range of books covers for these books available to you, why, you dunderheaded dolts of William Morrow, would you choose to do these stupid, mundane, rubber-stamp generic, meaningless uses of 0s and 1s?

The dunderheaded dolts at William Morrow may well say that ebook readers don't really care about covers. Well, this ebook reader does. But, more importantly, that does not matter. All that matters is that a publisher who has benefited and profited by publishing the books of Ray Bradbury for years, should have been sensitive enough to the spirit of this great artist to have treated his "immortality" with a little more respect.

So curse you William Morrow and your dunderheaded dolts who made this decision. May your corporate life and your individual lives become as rubber-stamped, as mundane, as dull, as unimaginative, as generic and as forgettable as the crap you have slapped onto the works on one of America's -- indeed, of the world's -- great literary treasures.
----------------------------------------