In recent weeks, activists have been retiring the Confederate flag by burning it to symbolize the end of the Civil War. Of course, Fox News objected, but another artist depicted the flag unraveling. A better idea would be to unravel the legacy of two, so-called Civil War heroes who are the reason there are so many unresolved issues from that conflict: William T. Sherman and Nathan Bedford Forrest.

While researching my article for the most underrated Civil War generals for my Memorial Day column (to see who was overlooked on the sites), I frequently came across sites that credited Northern General William T. Sherman along with Southern General Nathan Bedford Forrest with being two of the best in the Civil War, like this one. I have to respectfully disagree.

Why William T. Sherman Is Overrated:

William T. Sherman in the field was a disaster. He allowed the Union army at Shiloh to be completely surprised by Johnston's attack, leading the Northern Army to come within an eyelash of being completely smashed, even as junior officers begged him to take precautions days earlier. "Take your damn regiment back to Ohio," he chastised a prudent inferior officer. "There is no Confederate army closer than Corinth." Thousands of Union soldiers paid the price with their lives that day, and the next, just trying to retake the land Sherman gave up with his foolishness.

Sherman's incompetence continued into the Vicksburg campaign. Thanks to Sherman's loss at Chickasaw Bluffs with futile charges, Ulysses S. Grant was forced to spend valuable months trying to find another way to take the key Mississippi River port. Sherman failed Grant again at Chattanooga, as Patrick Cleburne blocked Sherman's advance. Only a desperate charge by George Thomas' troops saved the day and gave the North the win.

Despite these awful failures, Sherman was rewarded with a promotion and a mission to take Atlanta. Even though he held an overwhelming numerical superiority, he was beaten at Pickett's Mill and Kennesaw Mountain by Joe Johnston outside of Atlanta. Sherman only "took" Atlanta when John Bell Hood (the worst Southern general) failed in his three battles, thanks to Sherman's subordinates like George Thomas (at Peachtree Creek) and John W. Sprague at the Battle of Atlanta. Afterwards, with only civilians and a tiny Confederate forces in the form of Hardee and Hampton, Sherman had a clear path to "victory." But his brutal campaign of burning and plunder lost the peace more than it won the war, leading to decades, even centuries, of Southern bitterness toward Northerners. It was the only way Sherman could win a battle. 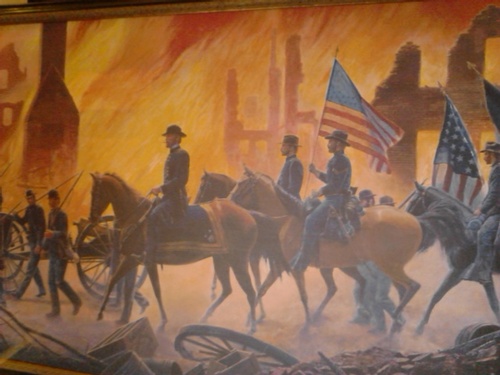 This artwork was made by the great Civil War artist Mort Kunstler and displayed in the LaGrange History Museum. Here's where you can purchase a copy.

Why Nathan Bedford Forrest Is Overrated

Nathan Bedford Forrest usually gets knocked by historians for his role in the Ku Klux Klan, but praised by tacticians for the battles he won. So why is he here? Forrest often times won battles when his focus should have been elsewhere. For example, he had a great victory Brices Crossroads and faked out A. J. Smith near Memphis after losing the Battle of Tupelo, but won such glory during the time he was supposed to be destroying Sherman's supply lines, an even more important task critical to the CSA war effort. He similarly could do little against John Schofield after the Spring Hill escape.

Similarly, he failed to defeat Yankees near Paducah, which might have made Union generals recall significant forces to defend against a raid into Ohio and other Northern states. But he was able to massacre a small force of White Tennesseans and African American soldiers at Ft. Pillow, which only inflamed Northern passions against Southern troops, which by and large didn't kill prisoners as Forrest did. Northerners were less likely to surrender to Confederates now, and prisoner exchanges that broke down the previous year (because the CSA would not release black soldiers and their white officers) never resumed. Whenever Forrest won, other Southerners lost.

It is interesting that after the Civil War, both men sought to team up together when war looked likely to occur with Spain over Cuba in 1873. According to Eddy W. Davison, Forrest offered his services to Sherman, who wrote the War Department a glowing recommendation of Forrest's capabilities. It's probably because Sherman and Forrest were two peas in a pod, falsely lionized by their "accomplishments" in the Civil War, who seemed to fare better against the unarmed than the armed. They are two reasons we seem to have unresolved post-Civil War issues.