At the age of 11 William "Theophilus" Brown shook the hand of the artist Grant Wood, the creator of "American Gothic," who was awarding him third prize in a juried art competition. "He (Wood) was amazed to see this kid walking up the aisle," Brown later recalled. In the long and richly artistic life that followed Brown racked up interesting life experiences, meeting many more "gods and idols" along the way.

Part of Brown's success in life seems to have stemmed from always know just what to do or say. One day in Europe, for example, he recognized the man knocking at a friend's studio door as Alberto Giacometti, and immediately set up an easel and invited Giacometti to draw the model with them. A few years later Brown challenged a young Richard Diebenkorn one day -- "I'll bet you can't paint a portrait," he noted -- and in short order Diebenkorn painted the first of many portraits.

Brown died on February 8th after an oyster dinner with his friend Matt Gonzalez. Among other things, Bill Brown has remembered as "everyone's favorite dinner companion," but there is much more to be said. I asked his friend and dealer Thomas Reynolds, who has organized a memorial exhibition, to tell me more about him.

JS: How did you meet and come to know Bill Brown?

TR: When I moved to San Francisco 25 years ago, I soon became fascinated by California art -- from the early grand landscape painters, through the Tonalists and Impressionists, the Arts & Crafts movement, the Society of Six and the Bay Area figurative painters. It seemed a terrific way to learn about the state's artistic history. And so much of it took place right here in San Francisco, where I was fortunate to establish a gallery in 1994. It was a real treat to learn a few years later that two of the great painters from the figurative movement -- Paul Wonner and Theophilus Brown -- lived just a few blocks down Pine Street from my gallery. 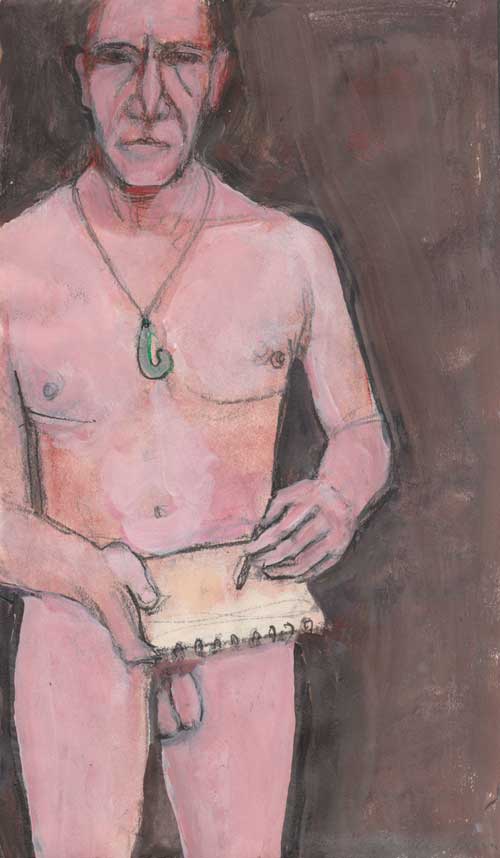 JS: What were Brown's characteristic subjects and styles?

TR: Theophilus always said his favorite subjects were horses and dicks -- but then he never could resist a clever quip or a bawdy joke. Much of his work has a surrealist or allegorical edge. Animals often appear in his paintings, especially horses and birds. And always the figure, usually nude, whether cavorting on an idyllic beach, or by the river, or in the studio. And if there was nobody else around, he'd paint or draw self portraits. He did many of those over the years.

During the 80s, his work took a sharp turn toward more realistic, almost precisionist, industrial paintings. And in his final decade, he did abstract collages. He'd sometimes recall that "Dick Diebenkorn told me I'd never be an abstract painter. But he was wrong."

Often people would ask him what his paintings were about. "What does it mean?" He steadfastly refused to answer, sometimes throwing his hands up in the air and saying, "Who knows?"

Of one of his large paintings of bathers, he commented, "That's a very unusual picture of mine because it has only one penis in it."

JS: How would you describe Brown's social and artistic connections?

TR: He knew everybody in the world of 20th century art, it sometimes seemed, and had a story about most of them, from Picasso and Giacometti in France, Rothko and de Kooning in New York, Diebenkorn and Park and all the other great figurative painters in California.

And he was kind and encouraging to many younger painters -- some of whom he taught in the classroom, even more that he taught by example of what an artistic life could be.

He's known as an artist, but he was an equally accomplished musician. He was a music major at Yale and played the piano with great skill and dedication, often accompanied by a violinist. He even recorded some of his original compositions. And he was still at the piano the day before he died.

Incidentally, he donated his piano to the San Francisco Towers, the retirement home where he and Paul Wonner lived in the last decade of their lives, and endowed an annual recital to encourage young musicians.

JS: How will you remember him?

TR: He lived surrounded by art and music -- and laughter. Our memorial exhibition is drawn entirely from the paintings and drawings and collages he had hanging in his apartment and studio at the time of his death -- his work, and a few special things he'd kept from Paul Wonner. We'll have a piano recital beforehand, on his beloved Steinway, and a single-malt Scotch tasting at the opening reception: another of his favorite things. And I'm sure there will be lots of laughter and loving stories told.