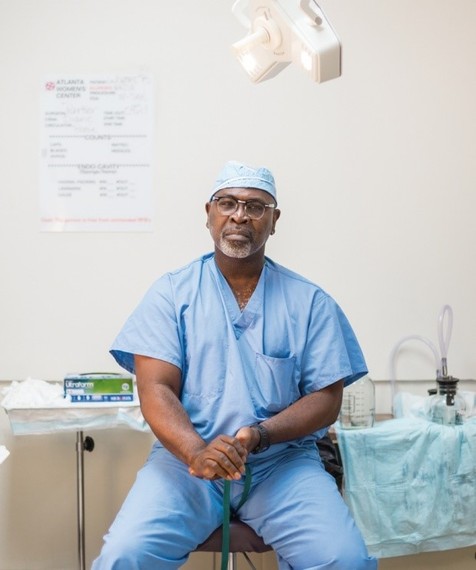 "The Racialization of Abortion," Willie Parker titled his talk; "A Dirty Jedi Mind Trick." He then spent about 45 lively, provocative minutes elaborating on the theme.

The occasion was a recent Grand Rounds presentation at the University of California, San Francisco School of Medicine, where he addressed a standing-room-only crowd of (mostly) young interns for an event that more commonly draws a smattering of attendees. But when Willie Parker comes to town, it's a good idea to bring in extra chairs. Parker is an African American physician, a provider of abortion and reproductive health services to women who would otherwise be denied them, current board chair of Physicians for Reproductive Health, a ferocious defender of women's rights and fearless citizen. He is also this writer's personal hero.

Parker explained in his opening remarks that his "is heart work and head work. Dr. Martin Luther King said the heart can't be right if the head is wrong. (King) also said we have guided missiles and misguided people." On the podium, delivering a rapid-fire lecture in behalf of reproductive justice, Parker is akin to a guided missile consisting of equal parts passion, outrage and statistics. The youngest of six children whose mother sent them to church three times a week, he speaks with the cadence and conviction born of those roots.

And it is at this point that Parker's inner preacher takes over. "People," he says, "we're gonna get ugly for Jesus." It is his challenge to those who attack him, most often fundamentalist Christians, for protecting the reproductive rights of his mostly young, Black clients. Often they also accuse him of participating in "Black genocide." It is this myth -- that abortion is a government plot to eradicate the Black race - that leads to the Dirty Jedi Mind Trick theme.

"It is epidemiological mischief," he explains. "They take data, put a spin on it that is not intended, and then start a 'call-and-response': You have white people saying abortion is racist, getting Black people to say Amen. They can put a cultural war in your framework. It's important that we recognize the significance of this message, and debunk it."

In addition to the epidemiological mischief there are outright lies. Former presidential candidate Herman Cain, an African American Tea Party Republican, said in one speech that 75% of abortion clinics were in Black neighborhoods, to encourage African American women not to have children. Parker says the correct figure, according to the Guttmacher Institute, is 9%.

"At its core," Parker says of these efforts, "it is patriarchal and insulting. They assume a woman is not capable of making her own decisions about her own body."

What's needed now, to combat all this, Parker says, "is a new framework, to define this community problem as Reproductive Oppressionon. Reproductive oppression is the control and exploitation of women and girls and individuals through our bodies." Parker cites the long history of reproductive oppression that includes "forced breeding during slavery, sterilizations, and human experimentation on Puerto Rican women for the contraceptive pill.

But there is hope. Parker cites Atlanta-based SisterSong and its formidable co-founder Loretta Ross as embodying the principals of reproductive justice. Parker lists these as:

1 - Every woman has the right to decide when to have children.

2 - Every woman has the right to decide if she will not have a child.

3 - Women and families (deserve) the resources to parent the children they already have.

4 - Every human being has the right to primary sexual pleasure.

Anti-abortion forces would certainly argue against at least the first two. Parker's message to the young interns was that it's not just argument, but twisted myths and dirty tricks that are being used to deny those rights. He maintains it's the responsibility of the medical community, among others, to stand up for women who are suffering from being denied, to fight against reproductive oppression.

In all likelihood, Willie Parker will keep right on leading that battle.