In a bright, open space on Second Street and Avenue B in Manhattan, an exhibition featuring 12 artists of Guyanese descent is on view at the Wilmer Jennings Gallery.

Guyana is a country that is approximately the same size as the state of Idaho. Although it is situated on the northern coast of South America, it is considered part of the "Anglo-Caribbean." The Dutch, French and English all planted their imperial flags on the terrain. With the abolishment of slavery in 1834, an influx of workers from East India came to the country. Today, 50 percent of the population is descended from East Indians and 36 percent is of African descendent.

At the opening, I was able to speak with several of the artists as well as the show's curator, Carl E. Hazlewood. His stated goal was to inform a larger audience about the achievements of artists of Guyanese ancestry.

Almost 40 works of photography, painting, welded steel, works on paper, and sculpture provided the foundation for expression that covered a continuum from abstraction to political subtext.

The ceramic and mixed-media sculptures of internationally recognized Donald Locke established an anchor and point of reference. Three of his sculptures from 2008-2009 are showcased on a wall shelf. They bear the titles: "Shaman's Rock," "The Legacy of Hernando Cortez," and "Interlude for Ginny: Timehri Bottle." Employing disparate elements including hair, fur, metal, and coral, they are combined with painted ceramic bases that feature recognizable figurative imagery in a black and white pictographic style. 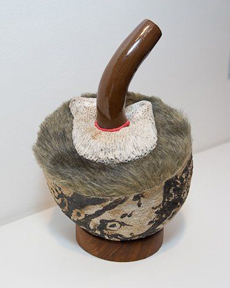 Situated in the same room is an overview of pieces dating from 1987 to 2008 by Gregory A. Henry. They demonstrate his facility as a painter, printmaker, and sculptor. In our conversation Henry told me, "I try to create forms that have many layers, using symbols and objects from the cultural landscape of Guyana, incorporating all the things that make the universe work and that we need in our lives." Henry reflected upon the push/pull, positive/negative, and ebb/flow -- as well as the humor -- that are consistently present in his ouevre. Looking at his "Untitled" sculpture of wood, steel, and coconuts from 1987 and his oil stick on panel, "Stuff" from 2005, it is evident that the shapes, construction, and elements are clearly linked.

Victor Davson is also represented by disparate time frames. His two pigment on paper drawings from 1996, "Limbo Anansi XX" and "XXVII" emerged from a suite that he completed in three weeks. Davson spoke about the "formal values of line, movement, and color" present in the drawings. He pointed out that his installation, "Dub Factor" (2008), shared the same formal values through "placement and paint." The "appropriated imagery" such as soul musicians and a reproduction of a portion of the United States dollar bill, tap into disparate topics, from American pop culture to the capitalistic structure of the national economy. 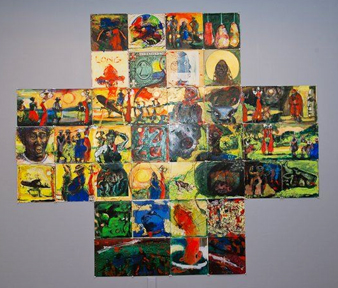 The oil diptych, "The Wounded Canvas: Lotus in Spring Time," by Bernadette Persaud, at first glance seems to be primarily about color and the floral lushness of a garden's beauty. A further examination reveals a bleeding bullet hole in the lower right hand corner. Of Indo-Guyanese heritage, Persaud acknowledges the unresolved societal tensions within Guyana.

Marlon Forrester blends a muscular intellectuality with his creativity. He spoke about his insights into the "Black male body in sports," and how a specific "manhood formula" is targeted to young African-American males in the 12 to 18-year-old bracket. Using the digit 23, the iconic number that is associated Michael Jordan, in both "White Nights I" and "White Nights II" -- Forrester delves into the ramifications of how the sport is sold and how it "commodifies" individuals, while creating an ethos of distorted values and misogyny. At the center of "White Nights I" is an inserted image of the artist holding a basketball in a Christ-like position. It is covered with a blood red wash. In "White Knights II," the center photo imagery has player Kobe Bryant -- who was embroiled in a sexual assault case -- collaged with a woman's torso. Placed directly to the left of this work is the assemblage, "Black Basketball." On a sculpture pedestal, a black-coated basketball sits with a heavily paint-encrusted pair of sneakers connected by their tied laces. Ominous in tone, it can be interpreted as a contemporary form of shackles and chain. 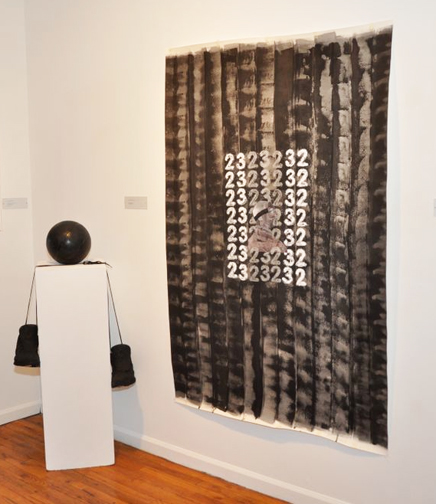 Keisha Scarville also explores identity. Her "Passport Series" is comprised of 12 individually framed pieces that use her father's first passport photo as the focal point. She interacts with the snapshot to "meditate on" her relationship with her father, and to "overcome an emotional distance" that has existed. Analyzing the effects of immigration, shifting the balance of power in the parent/child relationship, redefining gender roles, Scarville reconstructs her personal history while assuaging her specific emotional needs.

Additionally, there are three archival black and white digital prints by Scarville from her "Ghana, West Africa" series. They capture what she terms, "closed landscapes." Scarville's depiction of a young boy, partially obscured behind a rusting pole in a field of grass, brilliantly compliments Dudley Charles' drawing and collage, "Jacob's Ladder." The two monochromatic works riff off of each other's similar structures. The various lights and darks, textures, markings and lines in Charles' engaging 83" x 80" work on paper contrasts the handmade mark with the observations of the photographic eye. 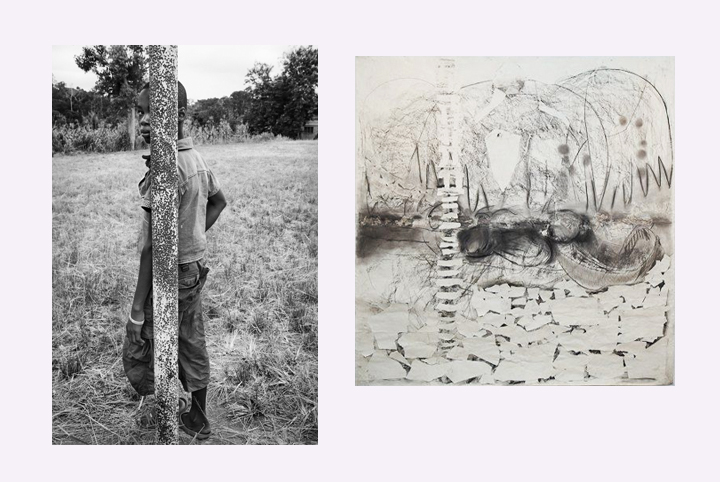 This strong exhibition stands not only as an examination of what these artists bring to the visual dialogue. Rather, it places them squarely as individuals whose imagery speaks both to their roots -- as well as to the broader global conversation.