Documentary filmmaking and 3D technology make for a natural marriage, as the intimacy and visual depth of 3D provides the viewer with a more complete immersion into the world of the documentary subject than 2D is generally capable of. As more filmmakers of note test the waters of 3D non-fiction features, the technology may prove to be even more of a game-changer for documentaries than it has been for the studio blockbuster.

Wim Wenders, the legendary German director behind Wings of Desire and Paris, Texas, hoped to make a documentary about famed choreographer Pina Bausch for years, but never felt that he could present Bausch's groundbreaking dance pieces properly on film or video... Until he saw U2's concert documentary U2-3D at the Cannes Film Festival and seized upon 3D as the key to translating the spatially complex work of Bausch and her Ensemble of the Tanztheater Wuppertal to the movie screen. 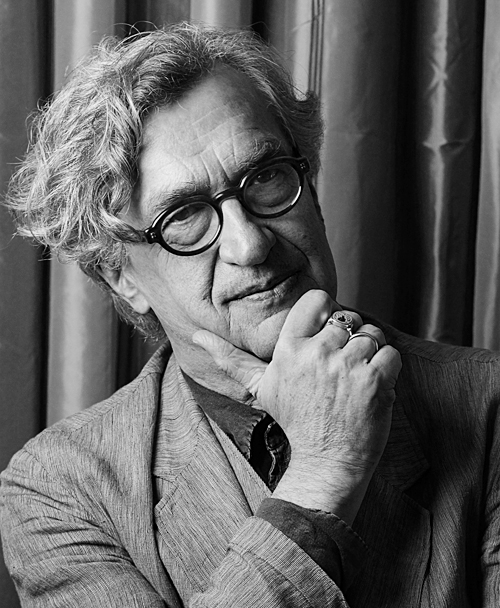 Wenders and Bausch were in pre-production on the documentary Pina when Bausch died unexpectedly on June 30th, 2009. Although the director's first reaction was to shut down the project, he eventually soldiered on, after conversations with members of Bausch's ensemble and staff convinced him that the spirit of Pina Bausch was still very much present in her work, as well as in her dancers, but that the time to capture it was now. 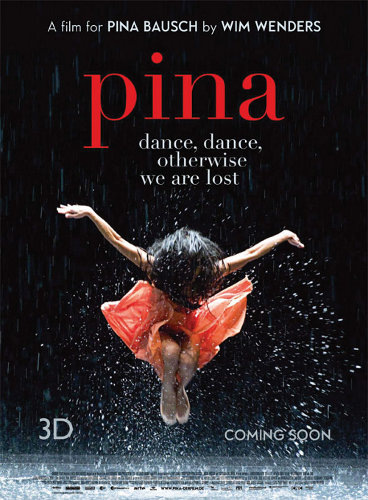 The finished feature of Pina showcases performances of Bausch's "Café Muller," "Le Sacre du printemps," "Vollmond," and Kontakthof," which are occasionally shot before a live audience. Solo pieces by members of the company are then performed in exterior locations, such as industrial areas and road crossings. Interviews with Tanztheater dancers and staff are also interspersed with footage of Bausch herself at work. With his exquisitely photographed 3D, Wenders opts not to have objects and people appear to be moving into the audience, as in the more traditional and gimmick-orientated uses of 3D, but instead creates a living world that appears to exist just beyond the screen, as if a live theater stage began right at the screen's borders.

Pina is Germany's official Oscar entry for Best Foreign Language Film and is also on the Oscar shortlist for Best Documentary Feature. It opens theatrically in the U.S. on December 24th.

We spoke to Wim Wenders during a recent trip to Los Angeles. 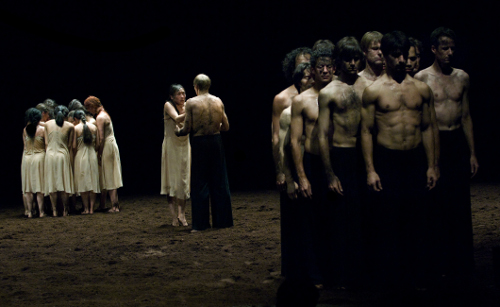 When you shot the composed pieces, you were effectively directing Pina Bausch's existing choreography for the camera. As she was no longer with us at that point, what ground rules did you put down for yourself in terms of any changes?

Wim Wenders: Pina and I had discussed how to shoot her work. Although she'd never seen 3D, she was very adamant about a couple of things... and one was that her choreography be directed to the audience. The lighting and everything had been towards the audience, and so, she really felt that when we filmed it, I should respect that direction. And then, I could shoot from left and right and center and high and low, but if possible, not any reverse angles. So, I promised that to Pina.

Yet, in the finished film, for one scene, I did shoot one reverse angle. I shot one close-up of the big guy in the center of the stage. And that was strictly a reverse angle, and I asked Pina for forgiveness, but I think she would have allowed it. 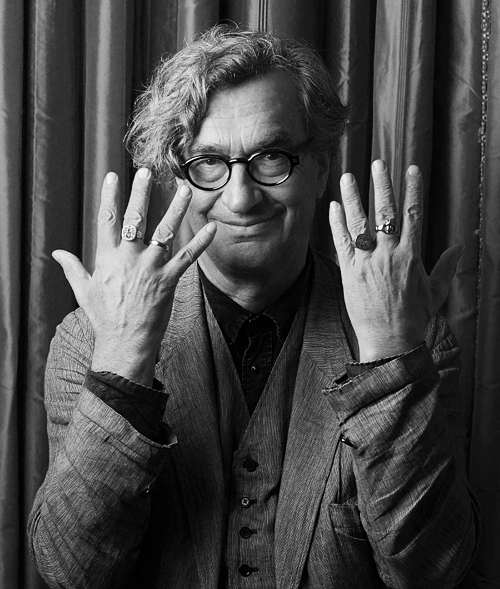 While watching the 'Café Muller' piece in the film, and specifically, the sequence where there is one individual awake while the others appear to be sleepwalking, it occurred to this viewer how important the selection of the right angles was in presenting the intentions of Pina's work properly to the film audience. How much of a challenge was that for you?

That was my main task, to be able to find the right angle at any given moment. And I really had to learn these pieces by heart, to know what was the best possible angle, and the best possible light, to shoot every moment of that piece. And that piece ('Café Muller') has such a fantastic architecture.

I've seen it often as an audience, so I thought I knew the piece. In filming it in 3D and actually being onstage with my camera, I realized a whole different structure.

Every day, I was more and more in awe of the fact that Pina had created this piece in two weeks. I mean... it's perfect. It's one of the perfect pieces of art of the twentieth century, in my book. And you could imagine somebody working on it for years and saying, 'Well, this is it.' They did it in two weeks.

You've mentioned previously that you didn't hear a single complaint from the group the entire time you were shooting with Pina's dancers and team. How do you think Pina created that type of working atmosphere?

Pina's main concern was truth, and not perfection. She wanted to find the truth of each of the movements, of each of the gestures, of every instant of the choreography. She wanted the dancers to be resting in themselves, and by themselves, and not playing anything where they weren't themselves. And they were, in the end, so sure of themselves that everybody didn't have to prove himself, or herself, by outdoing each other. But, it's a different kind of ensemble than I've ever witnessed. 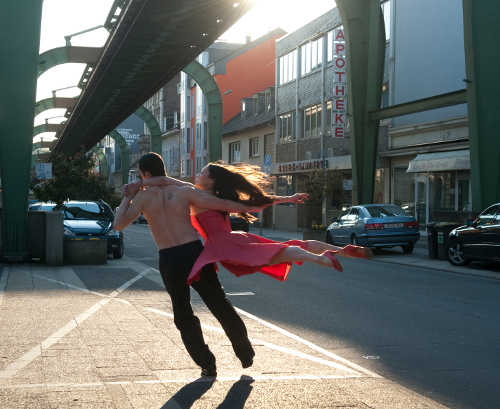 Some of the early edited cuts of Pina had no dialogue, or voice-over. Could the finished film have worked that way?

Well, good question, because we edited almost a year and a half. It was the longest editing process I ever went through, because it was difficult to find an easy, logical, sort of smooth way through it, because we had so much material. And, of course, there was no story as such. I tried as long as I could to just refrain from any words. And, in the end, I did refrain from using narration or anything like that, let alone my own voice. But, I eventually understood that the audience needed a little guidance into Pina's universe, and, of course, that could only be the dancers themselves. So, I remembered our conversations that we had. I found little pieces from each and everybody's stories with Pina.

You shot some of the pieces before a live audience at the Wuppertal Theater, utilizing a large crane, with a number of operators, to move the 3D camera about. With so many variables, this sounds like a massive production challenge.

Our crane was pretty flexible. But to shoot a stage performance with a live audience, of course... we couldn't put anybody onstage, so you had to stay out of people's view. I mean, we had some performances where we blocked half the audience, where a crane occupied half the theater, and so, only half the audience were sold, the other half we needed for technology. But, even then, we couldn't go onstage with the stuff. So, we had, with each of the pieces, two or three days where we had the dancers and the stage all by ourselves, and we could also interrupt them.

When we shot the public performances, it was always one take. The longest take we could do was one hour.

It was sometimes extremely physically exhausting to shoot for one hour at a time and hit about 500 marks in the course of one hour. I had never done anything like that.

It was sort of much easier when finally we did have the stage for ourselves, and I could say 'cut' and then the dancers would also stop, and the music would stop. That felt like paradise compared to the nerve-wracking process that once it started, the curtain opened and there was nothing we can do. If we weren't ready, we weren't ready... it was happening anyway. 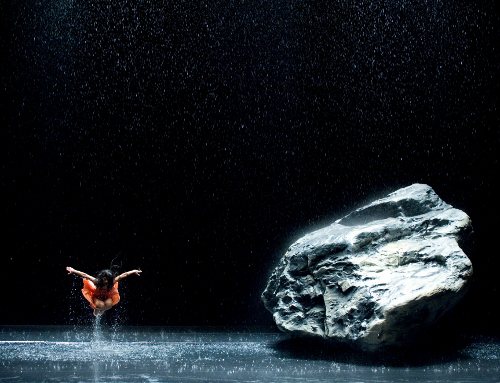 You obviously made the decision not to utilize 3D in the typical blockbuster studio film manner, in which images are often flying at the viewer. What were some of the other visual rules you laid down in terms of what the 3D would, and would not be, used for?

The main rule was that our attraction is not our technology. Our attraction is the dance. And that, we had to sometimes really remember every day. Because there are lots of temptations as you shoot in 3D. There are lots of things where you tell yourself, 'Oh, I could go for this and this, I can stretch this space here, I could have him or her come closer with the camera.'

I mean, there are lots of things that constantly tempt you to sort of go a little bit more for the attraction, and the excitement of the technology, but we refrained from it as much as possible, because in order to have a really natural viewing process, and in order for 3D to not become the center of attention, but always play the second fiddle to Pina's art, you had to keep it in its place.

Do you have any other 3D projects in the pipeline?

Oh, yes, yes. I definitely want to do another documentary in 3D, but it'll be a long-term project, it'll last a couple of years. And I'm also really looking forward to my first fictional work in 3D. And it still needs to be found out, how an intimate story, not one that is action-driven, could be told in 3D. How an intimate story... could meet 3D as a necessary ally, not just a gimmick, but as a part of the storytelling, and I think that code needs to be cracked. I'm pretty sure that lots of writers and directors are working on that right now. I'm looking forward to the kind of narrative films that will use 3D in an intelligent and necessary and subtle way, and not just hit you over the head with it.

Filmmaker, Editor at The Hollywood Interview.com