Hopefully “Do you want fries with that?” is a phrase they teach in college classrooms.

A McDonald’s in Winchendon, Mass., is apparently requiring potential cashiers to have a bachelor’s degree, according to a recent job posting. The ad, posted on jobdiagnosis.com, also says that applicants should be “friendly" and able to "smile while serving lots of guests daily.”

Are you a college graduate with student loans to pay and not enough money to pay them? Email jillian.berman@huffingtonpost.com.

Lori Ruscito, the owner of the McDonald's in question, wrote in an e-mailed statement to The Huffington Post that despite the posting, her franchise doesn't require potential employees to have a bachelor's degree.

"There has been some misinformation reported by an independent job site with no relationship to the Winchendon, Massachusetts McDonald’s," she wrote in the statement. "The original job posting, which could be accessed through McState.com, did not require a bachelor’s degree. We are working diligently to have the misinformation removed from the site but to date the website has been unresponsive to our requests."

In McDonald's case, the average salary for a cashier is $7.67 an hour, slightly more than the federal minimum wage of $7.25 per hour, according to Glassdoor.com.

UPDATE: This post has been updated to include comments from the Lori Ruscito, the owner of the McDonald's franchise.

Check out the job ad here: 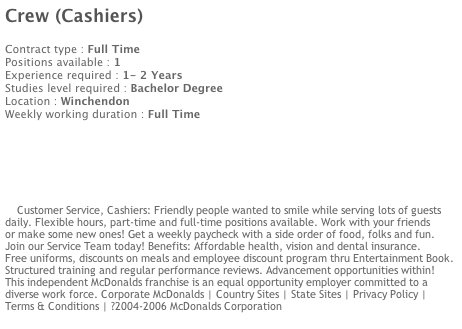