Are you looking for something a little different to do this holiday season?

If so ... Well, given that one of the more popular tales to tell this time of year (i.e., Charles Dickens' "A Christmas Carol") is just loaded with ghosts, maybe you'd be up for a visit to one of America's most haunted homes?

To be specific, the Winchester Mystery House in San Jose, California. Which -- earlier this month -- kicked off a brand-new "Spirit of Christmas" event that allows people to tour its infamous 160-room Victorian mansion and gives them a glimpse of what the holidays would have been like back in the Gilded Age. 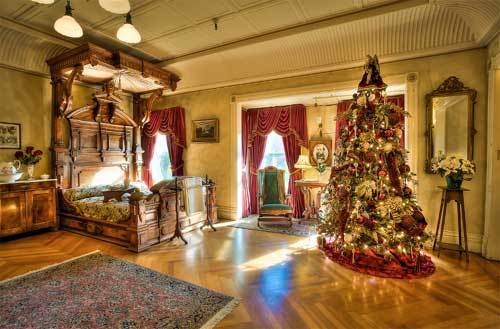 For those of you who don't know the sad story behind of the Winchester Mystery House, it all basically swirls around one Sarah Lockwood Pardee. Born in 1840, Sarah was the daughter of a wealthy carriage manufacturer from New Haven, CT. As they used to say, Ms. Pardee married well. In 1862, Sarah became the bride of William Wirt Winchester. Who was the son of Oliver Fisher Winchester, the Lieutenant Governor of Connecticut and manufacturer of the Winchester repeating rifle. Which was this hugely popular firearm that -- according to legend (as well as the slogan that Winchester used in all of its advertising) was "The Gun That Won the West."

So you'd think -- with the melding of these two wealthy families -- Sarah & William would then go on to live long happy lives. But that wasn't the case. Following the death of their infant daughter Annie in 1866, Mrs. Winchester fell into a deep depression that she never fully recovered from. Then -- when Sarah lost William to tuberculosis in March of 1881 -- she decided to find out why exactly her should-have-been-charmed life was instead filled with woe.

So -- following the popular custom of that time -- Mrs. Winchester reached out to a spiritualist. Who then told her this fantastic tale about how all of the bad things that had ever befallen her family could be traced back to the Winchester repeating rifle. To be specific: It was all of the Native Americans & Civil War soldiers that had been killed by this easy-to-use firearm that were now targeting the Winchester family from the spirit realm. According to this Boston-based medium, it was these thousands of vengeful ghosts that had caused Annie & Williams' untimely deaths. More to the point, this spiritualist supposedly suggested that all these restless spirits had now set their sights on Sarah. 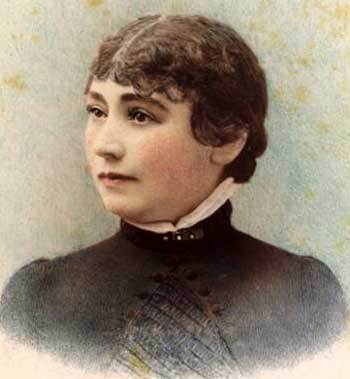 So what could be done to prevent Mrs. Winchester from sharing Annie & Williams' fate? This medium from Boston had a bizarre suggestion. Sarah was to first move west and then attempt to appease these vengeful spirits by building a great house for them. According to this spiritualist, as long as construction continued, the ghosts who wandered the halls of Mrs. Winchester's home wouldn't then go after her.

Fearing that her eternal soul was stake, Sarah followed this Boston medium's advice to the letter. She first moved from Connecticut to California. And then -- in 1884 -- Mrs. Winchester purchased an unfinished farmhouse just three miles outside of San Jose. And over the next 38 years, with the help of hundreds of workmen & artisans, Sarah transformed this eight-room home into a seven-story mansion. 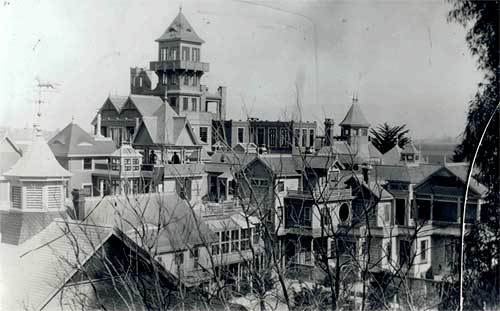 At the time of Mrs. Winchester's death in September of 1922, this structure sprawled across six acres. And among its 160 rooms were 13 bathrooms & six kitchens that were then connected by 47 stairways.

And ever since this house first opened to the public back in 1923, fans of the occult have flocked to this place. Eager to hear the tales that Mrs. Winchester's neighbors would tell about the bells that would first toll at midnight (i.e., the witching hour) and then 2 a.m. (i.e., the time when spirits must traditionally depart from the mortal realm).

Of course, with a back-story like this, it's easy to understand why this Victorian mansion has become a super-popular Halloween take-in with visitors to the San Jose area. But Walter Magnuson -- the recently installed General Manager of Winchester Mystery House LLC -- wondered if it might also be possible to make this paranormal showplace a must-see during another holiday season. Like -- say -- Christmas. 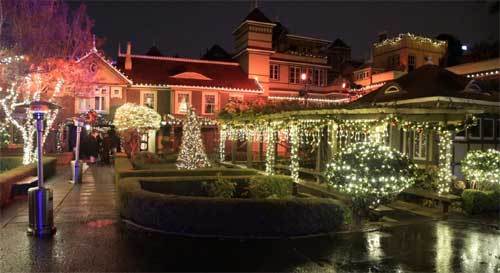 "I came to this position earlier this year after having spent the past five years at the Disneyland Resort. Which is actually kind of fitting, given that the Happiest Place on Earth has some very strong ties to the Winchester Mystery House," Magnuson explained during a recent phone interview. "Most people don't know this. But when Walt Disney was first considering adding a haunted house to Disneyland back in the mid-1950s, he sent Ken Anderson, one of his key Imagineers, up to San Jose to take a look at the Winchester Mystery House. Ken came up here for a long weekend, wandered through the mansion, observed a number of tour groups and then filed his report in 1958."

Ken Anderson submitted to Walt Disney two pages of notes on the Winchester House, from the size of the tour group (maximum of 20), the mix of adults and children (roughly four times the number of adults to children), the maximum/minimum entrance and exit time in each area (25 seconds to 60 seconds), the maximum/minimum time the guide spoke in each area (32 seconds to three and a half minutes), as well as a variety of notes like "average group well behaved" and "rooms are all empty-nothing to touch." 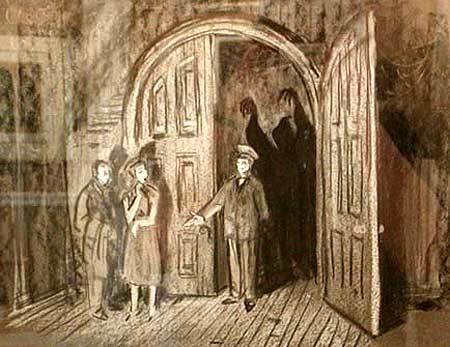 Mind you, this was back when Walt thought that Disneyland's Haunted Mansion was going to be a walk-thru attraction. Which is why the Winchester Mystery House -- given its paranormal legacy as well as this building's ability to accommodate multiple tour groups at the exact same time -- seemed like the ideal template for this theme park's proposed spook house attraction.

"And Anderson didn't just wind-up borrowing the way that the Winchester Mystery House pulses tour groups through the building and its grounds," adds Magnuson. "If you were to compare the grand ballroom at Disneyland's Haunted Mansion with the grand ballroom that we've got here at the house, you'd see that these two spaces have pretty similar design," Walter continued." 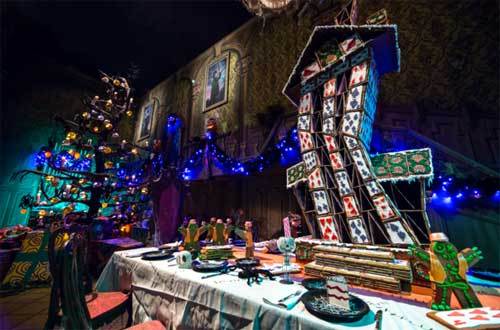 And given that Disneyland's Haunted Mansion has proven to be a pretty flexible structure (EX: This attraction's annual transformation into "Haunted Mansion Holiday." Which is when the characters from Tim Burton's "The Nightmare Before Christmas" take up residence in Disneyland's haunted house from the first week of September through the first week of January), Magnuson wondered what might happen if the Winchester Mystery House experienced the same sort of seasonal overlay.

So Walter rallied the troops at the mansion, many of who have worked at this fabled San Jose area attraction for decades now. And in just a few short weeks, they were able to cover the Winchester Mystery House with over a 100,000 twinkling lights and thousands of feet of festive garland. Inside the house itself, over 20 designer Christmas trees featuring nearly a thousand ornaments have been set up in various rooms. And as people tour through the building, they'll then encounter joyous carolers, holiday revelers from the Victorian era, even St. Nicholas himself.

Of course, given that the Winchester Mystery House has 47 different fireplaces, one has to wonder how St. Nick chooses the chimney that he's then going to go down. But that's probably a question that should be answered in a future HuffPost piece. 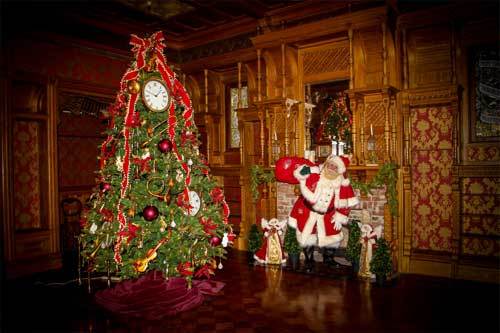 "We even predict hourly snowfall during our 'Spirit of Christmas' evening events," added Tim O'Day, Director of Marketing & Communications at Winchester. "This beautiful snowfall occurrence in our Central Gardens replicates actual rare snowfalls that fell on the Winchester estate and the fruit orchards of the Santa Clara Valley back in the late 1880s and mid-1890s."

The inaugural presentation of "The Spirit of Christmas" continues at the Winchester Mystery House on December 20, 26 & 27.