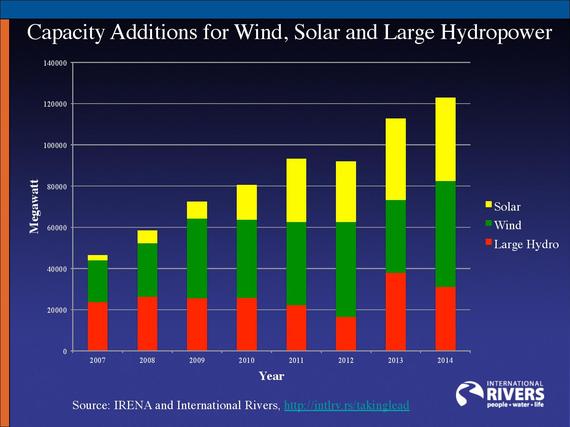 Dam builders like to claim that hydropower is the world's largest source of renewable electricity. After a century-long head start over wind and solar power, large hydropower indeed accounted for 52 percent of the world's renewable energy capacity in 2014. But new figures from the International Renewable Energy Agency (IRENA) show that the picture is quickly changing.

Not all wind and solar projects are socially and environmentally benign, and not all hydropower projects of 10 megawatt and more destroy ecosystems. But overall, wind and solar projects have a smaller environmental footprint than hydropower dams, can be built closer to where people need them (including far away from the electric grid), and are more resilient to climate change. Unlike hydropower dams that can irreversibly destroy ecosystems and wipe out species, they are truly renewable sources of electricity.

Dam builders argue that wind and solar power are so intermittent that they need to be backed up by hydropower reservoirs for a reliable supply of electricity. The upsurge of wind and solar power has indeed given dam builders their own second wind. Yet the price of environmentally friendly battery power is dropping fast, and smarter grids can balance more intermittent power sources. We will not need to build more destructive dams to balance a growing share of wind and solar energy. If the current trend continues, solar power can blow dam building out of the water.

Based on data from 77 countries, IRENA also reports that the performance of hydropower projects is deteriorating. In 2000, hydropower plants on average generated at 44 percent of their capacity. By 2014, their average performance had fallen to 40 percent. IRENA does not offer an explanation for this trend, but whatever the reasons are, it does not bode well: Is hydropower generation dwindling under the impact of ever more serious droughts? Are farmers and industrial users withdrawing more water from rivers? Or are dam builders running out of good sites for their new projects?

While governments and private investors favor wind and solar power over hydropower, the World Bank and other international financial institutions continue to prioritize large dams. In 2014, the World Bank devoted no less than 56 percent of its power sector lending to large hydropower projects. (It lent 30 percent of its power sector funds for wind, solar and geothermal projects, and 14 percent for oil and gas.) The Bank is currently funding 68 large hydropower projects, and has another six in its pipeline.

Like the dam building industry, the World Bank explains that "hydropower is the world's largest source of renewable energy." This is a backward-looking argument. With the same justification, financiers could have argued for a continued focus on landline connections rather than mobile phones fifteen years ago. The future belongs to wind and solar power.